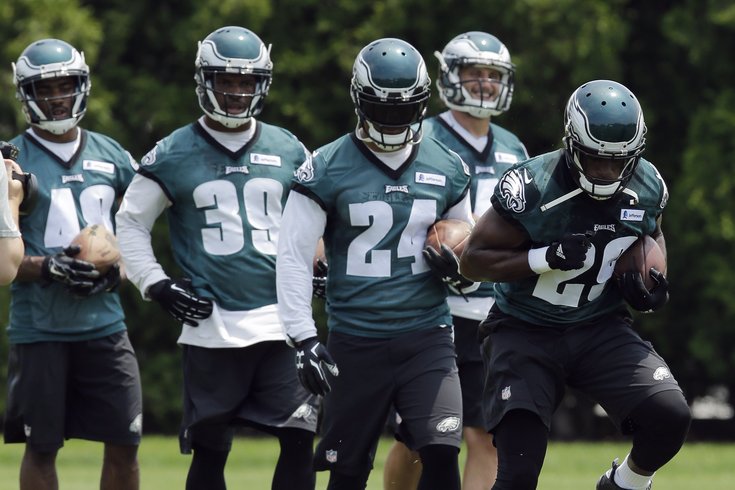 Eagles players watch in amazement as vision-impaired DeMarco Murray navigates through the ropes during drills.

DeMarco Murray is blinder than a bat, or so I've been told by Cowboys fans ever since the Eagles signed him during free agency this past offseason. He doesn't see holes, he doesn't make the most the of his opportunities when he gets into the second level of the defense, he should have had 4000 yards instead of 1800+, blah blah blah.

That rhetoric was further emphasized by Murray's backup, Joseph Randle, who said during OTAs that Murray left "a lot of meat on the bone," which means he didn't gain as many yards as he should have.

And so, over the last few weeks, Cowboys fans have been sending me useless screen grabs of DeMarco Murray missing holes. Screen grabs are fine and good if used objectively. However, you can essentially take a screen grab paused at the exact moment during the action that most perfectly fits your argument, slap it up on the internet and call it analysis. It's cute when morons do that, but when national football writers do it, their claims are going to be double-checked for accuracy.

Enter Andy Benoit of Sports Illustrated, who took three screen grabs of DeMarco Murray, which (I think) are intended to show that he left "meat on the bone." I'll screen grab their screen grabs one by one:

Hang tight with me for a second, as I'm going to get very technical here. In 2015, iPhones and self-driving cars aren't the only advancements in technology. There are also things called "gifs," which for football analysis, show live action instead of screen grabs. I made such a "gif" of the above play for the viewing audience, embedded below:

The above is supposed to be an example of poor running, when it could be argued that the exact opposite is true. Murray actually shows pretty good patience and vision, and gets a gain of 8.

OMG!!! Look at the size of that hole!!! How in the hell did Murray take the red path instead of the yellow one?!?!? Well, let's look at the actual live action.

On the above run, I think it's fair to say Murray could have maximized his run by running through the hole inside the fullback instead of going around him. In the video you can see Murray dip inside for a split second before deciding to bounce it, so it's not as if he didn't see the lane. Obviously, he saw something he didn't like. It may have been Doug Free getting no push whatsoever on the edge on the DE (#97), or something else. However, as noted above, you can pretty much pause a screen grab wherever the hell you want to make something like this look far more egregious than it really is. There's certainly no guarantee that #97 isn't tackling Murray if Murray had tried to run through the hole instead of around the edge.

But clearly, the screen grab far from shows the whole story on that play.

This one is a joke. Murray had nothing to work with whatsoever here, and he still managed to get positive yardage.

Including the playoffs, DeMarco Murray carried the ball 436 times, and the three examples above are the best people can come up with to show Murray leaving yards on the field?

The reality is that every running back ever has missed some holes. However, Benoit apparently had no interest in objective analysis, as there were plenty of runs that show good vision from Murray. Take the follow play, for example. The play design is around the left edge, but Murray sees the linebacker (#57) over-pursue, so he cuts it up, finds a big lane and is off to the races.

Or this one. The play side is to the left, Murray patiently waits for the play to develop, and when a hole opens in between the C and LG, Murray hits it for a nice gain.

I guess an argument could be made Murray could have cut left once he hit the second level, but then you'd be missing the linebacker (#57) who was in pursuit who probably would have tackled Murray (I can use screen grabs too!):

Or this one, where the play side is to the left, Murray sees daylight so he tries to cut it up, but when that hole is filled he bounces it outside to the right where he finds some room to run:

Or this one, where Murray stretches the action to the right, puts his foot in the ground and cuts it up, makes Earl Thomas miss, and bada bing bada boom, TD. No biggie.

To note, I spent almost no time finding the four plays above. They were in the same games (vs the Bears and Seahawks) that were conveniently missed in Benoit's analysis. I would venture to guess those positive clips have plenty of friends.

As long as I'm bashing Benoit's terrible post, I may as well get my money's worth. A few of my favorite parts:

Benoit: "Randle averaged 6.7 yards a carry off the bench in 2014. He can average well over 5.0 getting 20-plus carries a game as a starter as long as he plays with the discipline that Murray sometimes lacked. Not to stoop to giving fantasy advice, but the third-year pro and first-time starter would not be a reach late in the first-round of your 12-team draft."

Benoit: "Randle’s only obstacle to 1,500-plus yards is Darren McFadden, a fascinating wild card in this backfield equation. In between hamstring pulls and ankles sprains, McFadden has proven to be an excellent straight-line runner. But if Murray is “plywood” on the stiffness scale, McFadden is “oak.” My good friend Greg Cosell of NFL Films once said it best: it’s like McFadden’s lower body and upper body are fused together. An inability to make people miss was something previous Raider coaching staffs didn’t like about the former first-round running back.

Jimmy: Dallas' OL is so good that they're basically five Christian Okoyes in Tecmo Bowl. Get anywhere near them, and you will literally bounce off of them as if you've just been hit by a car.

Also, McFadden is fascinating indeed, in that he's still in the league after three consecutive seasons in which he averaged 3.4, 3.4, and 3.3 yards per carry, although in fairness that's like 18 yards per carry behind Dallas' OL.

Oh, and Randle is so good, by the way, that the Cowboys let him touch the football during the playoffs. Twice.

Benoit: "Running behind this group is like singing the Star Spangled Banner: the less creative you try to be, the better job you’re likely to do."

Jimmy: Benoit after typing that sentence: