What's next in the Nick Foles contract saga? 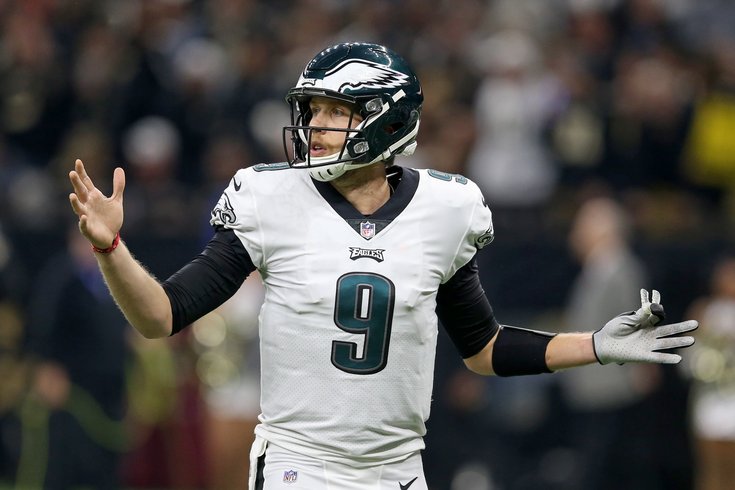 Why'd you sign such an annoying contract to have to explain, BDN?

On Tuesday evening, the Philadelphia Eagles notified Nick Foles and his camp that they were exercising Foles' $20.6 million option to stay with the team in 2019 (Tim McManus first to report).

At that point, Foles and his camp had five days to decide whether or not they would pay back a $2 million 2018 signing bonus that would essentially buy Foles' way to free agency. They wasted no time whatever, swiftly informing the Eagles that they would indeed pay back the $2 million to become a free agent (Adam Schefter first to report).

If you're a regular reader here, you know that the events so far are going as expected.

Going forward, the next step in this process can go one of two ways:

Option No. 1 is straightforward. As a free agent, Foles would count toward the compensatory pick formula. Assuming the Eagles don't sign pricey free agents of their own, thus offsetting the loss of Foles, they would be in line for a 2020 third-round comp pick for losing him.

Option No. 2 is far more complicated.

To begin, the Eagles would clearly be franchise tagging Foles for the purpose of trading him. As former agent Joel Corry of CBS noted recently, the team using the tag must intend on keeping the tagged player for the upcoming season or negotiate in good faith with him on a new contract that would keep him with the team. As Corry notes, the league allowed the Patriots to trade Matt Cassel while on the tag in 2009, despite their clear intentions of dealing him.

Giving Foles a non-exclusive franchise tag would be just to trade him although there is specific language in the NFL Collective Bargaining Agreement requiring a good faith intention to negotiate with a tendered player or keep him for the upcoming season at his tender. This type of language was a part of the labor agreement in existence in 2009 when the Patriots put a franchise tag on quarterback Matt Cassel. It was obvious New England wasn't going to pay Cassel $14.651 million to be Tom Brady's backup after he recovered from the torn ACL that sidelined him for practically all of the 2008 season. The NFL allowed the Patriots to trade Cassel and linebacker Mike Vrabel (now Titans head coach) to the Chiefs for a 2009 second round pick (34th overall).

I, for one, am shocked that the Patriots would attempt to buck the system. Perhaps the loophole there is to make a low-ball contract extension offer to Foles that the team assumes he will reject. Anyway, once you get past the notion that the Eagles would be misusing the franchise tag in terms of its intended purpose, it also comes with significant difficulties and risks.

The Eagles would have to find alternate ways not involving Foles to shave off somewhere in the ballpark of $20 million that they are projected to be over the salary cap when the new league year begins. That would require some heavy restructuring or termination of players' contracts, with the most likely candidates being Timmy Jernigan and Jason Peters. The Eagles already restructured the contract of Rodney McLeod.

Secondly, there would logically have to be a perfect storm of cooperation from three different sides for that to happen:

That is all highly unlikely.

And finally, the doomsday scenario is one in which Foles actually signs the franchise tag (which wouldn't be crazy by any stretch), which would become immediately guaranteed. In that event, there's no guarantee that a team would trade for Foles at his $25 million cap number, much less give up a quality asset to do so, especially with no assurance that he's going to sign a long-term deal once acquired. There's a real chance that if the Eagles tagged him, they would be stuck with him for the 2019 season, and his $25 million cap number would be an enormous rock in the jar that would not allow the Eagles to improve their roster in other areas.

The Foles front should be quiet for a few weeks, as the Eagles can't franchise tag him until February 19. The deadline to tag him is March 5. Schefter previously reported that the Eagles were expected to use the franchise tag, and then try to trade him:

Sources: Eagles expected to use their franchise tag on Nick Foles, then try to trade him for a third-round pick, per league sources.https://t.co/uPKcMmEcfh

I don't buy it, as the risk isn't worth the reward. The most likely scenario is that the Eagles will not franchise tag Foles, and he will walk in free agency.

God I can't wait until I never have to discuss this contract again.