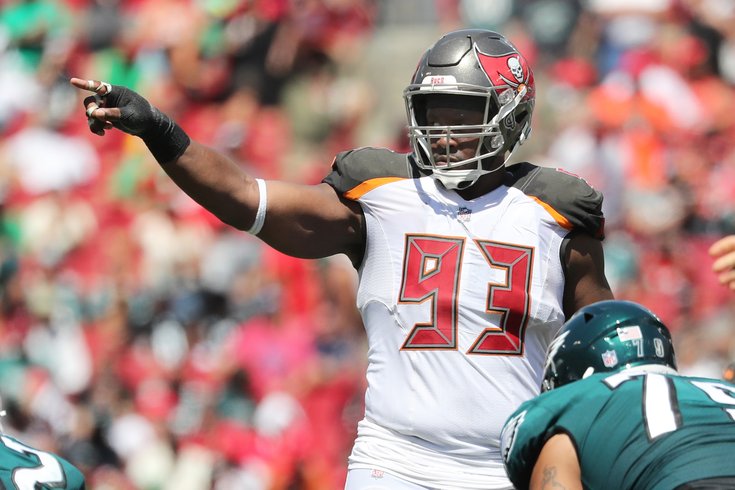 In our Eagles chat last week, there were a lot of questions that we could not get to in time or other questions we did answer but could use more color. And so, let's do a mailbag post to answer some of the overflow.

Question from MR NFL: Gerald McCoy is scheduled to make $13 million on a Bucs team about to transition to a 3-4. If he got cut, would you have interest? And if he isn’t cut, would you trade a 6th round pick for him? To me, even though he is 31 with a lot of tread, he’d be great to pencil in next to Fletcher Cox. I also think the Eagles’ defensive line rotation would keep him fresh, and he would no longer face many double teams playing next to Cox.

I wouldn’t trade for him, because the Eagles would be responsible for the full $13 million. McCoy is still a good player, but he isn’t "$13 million per season good" anymore. If the Bucs released him, however, yes, I do believe the Eagles should be interested for all the reasons you noted, plus the fact that he wouldn't count toward the compensatory pick formula.

Question from Tennessee Derek Barnett: This is likely a pipe dream, but what are the odds the Eagles could snag a guy like Jadeveon Clowney in free agency?

I’d be stunned if the Texans didn’t tag him.

Question from Mike: What position is the larger need long term and for next season? LB or DE?

Short-term is debatable, but DE is the bigger need, long-term, by a mile. It’s a far more important position, especially in the Eagles’ scheme, which relies so heavily on the front four creating pressure without the help of blitzing. They also like to have a lot of good ones so that they can rotate them and keep firing “fastballs.” The Eagles are going to be thin there in the near future, even if Michael Bennett and Chris Long return.

As for linebacker, I know that many Eagles fans are pining for a great one, and many have cited Dallas’ linebacker tandem of Leighton Vander Esch and Jaylon Smith as a good example of why. However, it’s just not a position they value all that much.

With a restrictive salary cap and a finite number of draft picks, every team values positional importance differently. The Eagles adhere to the QB-OT-OT-DE-DE-CB-CB philosophy, which is wise, in my view.

Question from French Bird: A lot of people are pushing for a RB in the first round. I’m thinking that this would be an enormous mistake following the Leonard Fournette and Todd Gurley injuries.

Back in 2016, before the draft, I wrote an article about how taking Ezekiel Elliott would be an awful use of resources with the 8th overall pick, which the Eagles held at the time.

The primary argument against it was proof of how running backs have extremely short shelf lives over the course of their careers. What I failed to also mention in that piece, however, is that they can also wear down over the course of the season, and I think Gurley is perhaps a good case study on that theory. He was incredible early in the season, but not so much when it mattered.

If there's a great back, and I mean a legitimately great prospect, to be had at pick No. 25, then sure, go get him. But I remain firm in my believe that drafting one in the top 10 is generally a bad idea.

Question from Ben: What is the possibility of Press Taylor going to join his brother in Cincinnati? That’ll leave three vacancies on this staff. Do Doug and Howie realize that being proactive verses reactive normally works? Smh.

No need to shake your head. First, yes, of course they try to be proactive in handling of important situations whenever possible.

As for Press Taylor leaving to join his brother in Cincy, the Eagles can block that if they so choose. They blocked John DeFilippo from joining the Jets’ staff as an offensive coordinator after the 2016 season, and they can do the same with Taylor this offseason. The only time you can’t block an assistant from leaving is if they are offered a head coaching job, which is obviously not happening here.

Question from Tom: Do you think the Eagles are better off trying to draft a guy like Marquise Brown or going after a bigger wide receiver, like N’Keal Harry or Kelvin Harmon. I personally think they need the deep threat as opposed to another big receiver. Thoughts?

I think Brown is a guy who could slide right in and be that deep threat right off the bat for the Eagles. He has explosive speed, and could really open up the offense. The other receiver that I think many are sleeping on who has deep speed as well, but is 6-foot-4, 225 pounds, is D.K. Metcalf.

We’ll have a whole series on the players of interest at each positional group leading up to the draft.

Question from Joseph: Can you periodically interrupt a chat to say, “Hold on, I just got something big I need to check out,” and then come back 10 minutes later and never explain it? Your readers would lose their minds, to much amusement.

Ha, that might be a fun thing to do the week before free agency.

Question from PhillyPhilly: What is one thing you do that you know is super lame and you do it anyway?

Oh man. I can't believe I'm about to cop to this. The expectation here is that people will leave their own lameness examples in the comment section, which I look forward to reading. With that disclaimer out of the way...

If I'm dating someone new, on the car ride over to wherever I'm meeting her, I will squeeze the crap out of one of those grip strengthener things, until I can't anymore, with each hand. Why would I do such a thing? Well, it gets your forearms all jacked up and veiny for a while, creating the illusion that the rest of my body is equally jacked, lol.

Mock me if you'd like, but you know you're going to try that.