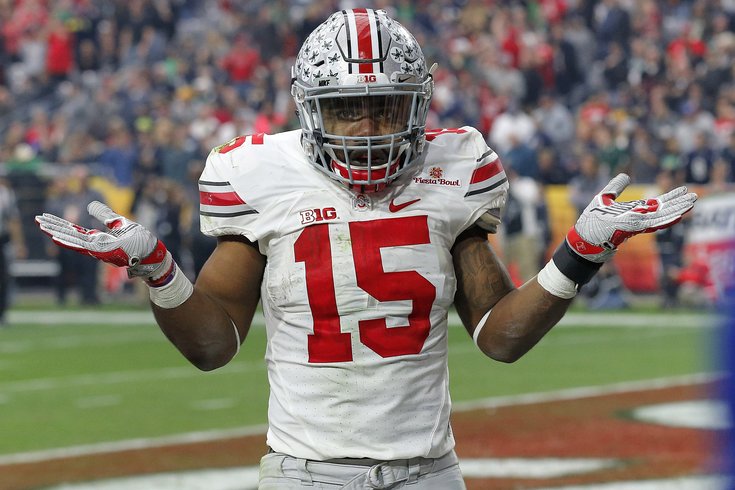 When the Eagles traded up from 13 to 8 on the first day of the new league year a week ago, it opened up a whole new list of possibilities in terms of who could be available to them in the draft. One of those possibilities is Ohio State running back Ezekiel Elliott.

To begin, let's be very clear -- Elliott is really, really good. This is in no way a slight against Elliott, rather, it's a about the value of drafting the position he plays at the eighth overall pick.

After trading DeMarco Murray, the Eagles are down to Ryan Mathews, Darren Sproles, and Kenjon Barner. Mathews is frequently injured, while Sproles will turn 33 in June and is in the final year of his deal. The Eagles can use help at running back. There's also the argument that the Eagles don't currently have an explosive talent in their offense, and that's what Elliott has the potential to be.

The lifespan of an NFL running back is incredibly short

Running backs take a pounding in the NFL. Their bodies wear down, and even the good ones rarely make it beyond the age of 30. Below is a chart of the projected starting running backs for all 32 teams, as their rosters currently stand:

As you can see, only five of the NFL's projected starters at running back are 30 years of age or older. Two of those backs -- Justin Forsett and Rashad Jennings -- have less than 750 career carries. Had they carried the load for the entirety of their careers, they'd probably already be out of the league.

The average age of the running backs above is 25.5 years old, and that's before the draft, when some rookies will replace aging vets atop the depth chart. By comparison, the average starting age of NFL quarterbacks heading into the 2016 season is 29.4, and that's with an almost 40-year old Peyton Manning having already retired.

In short, if you're a Super Bowl contender looking for an immediate impact player for the short term, then sure, go draft yourself a running back talent in the middle-to-end of the first round. If you're not currently a Super Bowl contender, however, (cough, Eagles, cough), it becomes harder to justify taking a running back at eighth overall and putting two years of wear and tear on him before you're likely going to be in a position to compete for a Super Bowl.

Running backs drafted highly can be busts, just like any other position

There's a notion that drafting certain positions highly will more often produce a bust than a star player. That's true, and it's kind of the nature of the NFL Draft in general. Running back is no different. Here is a list of all the running backs taken within the first 20 picks since 1995:

There is a whole lot more buyers' remorse in that list above than there were teams who were happy with their selections. If anyone tells you that Elliott is a "can't miss" prospect, they are wrong. He may very well end up being great. Or he could be Curtis Enis.

The 2017 running back class is STACKED

Over his college career, Elliott has put up eye-popping rushing stats at Ohio State.

Again, there is no question that he is a great player. However, there is an absurd number of really good sophomore running backs who will be eligible to enter the NFL Draft in 2017. A quick list:

And then there's Wisconsin's Corey Clement, Pitt's James Conner, and Baylor's Shock Linwood, who will all be highly regarded seniors in 2016.

Even if you believe that Elliott is better than every single one of the players listed above (I don't, for the record), wouldn't it be much better value to get a marginally less talented back in the second round in 2017 than Elliott at eighth overall?

Finding a good running back isn't like finding a franchise quarterback, a quality offensive tackle, a good cover corner, or a stud edge rusher. Good running backs are easy to find. The other positions, not so much.

Furthermore, you can be exposed if you don't have a QB, OT, CB, or lack a pass rush, whereas teams routinely have shown they can thrive without a top-flight running back.

Elliott is a great player, and he could pay immediate dividends for an Eagles offense that does not have much in the way of home run threats. Just not at 8.