What's up with the scaffolding surrounding the William Penn statue atop City Hall? 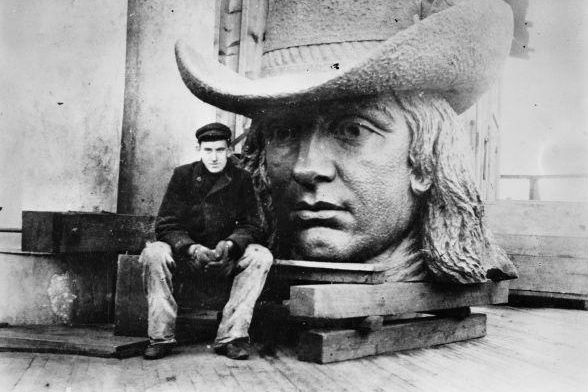 The William Penn sculpture atop City Hall was assembled in several different parts.

Next time you're at City Hall, look up – the 125-year-old William Penn statue that sits atop the iconic building is getting a much-needed deep clean.

That's what the scaffolding surrounding the highly-recognized, 37-foot-tall monument is there for, and that's how it'll stay for about six weeks, according to Curbed Philly.

It's all part of a conservation process that's being overseen by the Office of Arts, Culture and the Creative Economy and carried out by Moorland Studios, a New Jersey company that specializes in metal sculpture conservation.

"The rate of corrosion has been increasing over time, and conservators have been working to develop a high-performing coating to help slow that increase," the OACCE said on its website detailing the project. "Due to the porosity of the original casting, corrosion products develop deep in the highly pitted surface. This intrusion is of significant concern."

It's about time. Billy Penn hasn't gotten this kind of treatment since 2007 and not since 1996 before that. Cleaning this year was expected to begin in the fall, but kept seeing its fair share of delays.

Because it's been 10 years since the statue's last good scrub, the process will be far from the average soap and water job.

Conservationists will clean Penn with "a low-pressure water system" and a non-ionic detergent. The statue will get laser treatments to get rid of some corrosion in the statue's pitted surfaces too, according to the office.

Penn is also getting a hardcore wax. To get the job done, conservationists will torch the statue and spread it with a cold wax using a bristle brush. Penn will get buffed to finish off the process.

Those flawless grams will have to wait a few more weeks, but it looks like Penn will be ready for the camera when the time comes.