When a SEPTA bus blocked their view of the Eagles parade, joy turned to anger

Via Tweet, city says it's 'absolutely sorry' for what happened 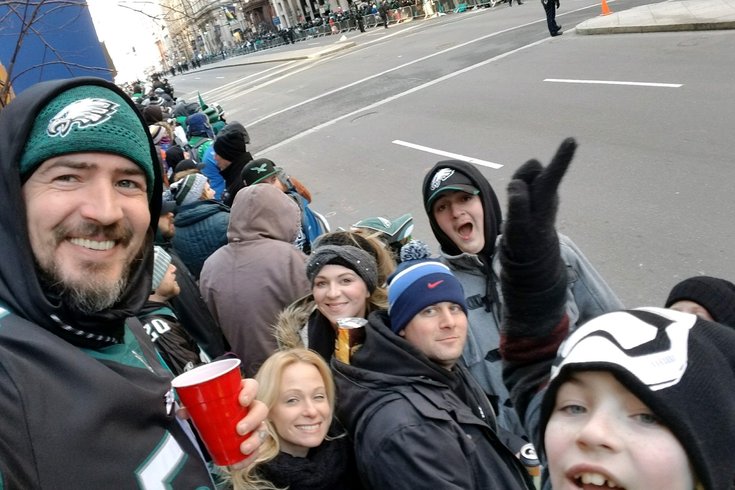 A limo bus picked 15 people up at Jason Duff's Burlington, N.J. home in the wee hours of Thursday morning to come to the Eagles parade. They all had a blast until a SEPTA bus pulled up and blocked their view of the procession.

As it turns out, not everybody left the Eagles celebration parade happy on Thursday.

In fact, some left downright angry, and it all came down to where the Philadelphia police parked three double-length SEPTA buses just before the procession was passing by Broad and Chestnut streets.

One of them was Jason Duff, a 38-year-old man from Burlington, N.J., who took his kids out of school for the chance to see the historic parade.

Same went for Cindy Broomall of East Norriton, Montgomery County. She and her husband, Kevin, got a hotel room in Center City so they'd have an easier time getting to the parade.

Duff thought ahead, too. He drove over to Philadelphia on Wednesday night, parked a car in a garage near Broad and Vine streets. Then, he went back to Jersey, got a couple hours of sleep and woke up around 2:30 a.m.

Shortly thereafter, the limo bus he rented arrived to pick up a party of 15 people including Duff's three children – Jordan, Gaige, and Kysten, ages 12, 14 and 19, respectively.

It was a big deal.

"Since we had younger kids with us, we didn't want to go to the Art Museum since they expected a million people there and didn't want to get caught up in that," Duff told PhillyVoice on Friday afternoon. "We got to Broad and Chestnut around 4:30 a.m., picked our seats and just were excited from that point on. It was going to be an amazing day."

"It turned out to be a once-in-a-lifetime opportunity just gone. Everybody's deflecting blame. SEPTA blames the police. The police blame the mayor. I saw a little girl with tears coming down her face." – Cindy Broomall, East Norriton

He said they passed the time between their arrival and the start of the parade by having football catches and taking selfies with police officers. There was an off-duty officer in his crew, so he has the utmost respect for the profession, he said.

"Everything was going good. The block started filling up," he said. "We saw the tractor trailer with Swoop (the mascot) and the cheerleaders. Then, before any of the (team) procession, the buses showed up. The video shows it all from there."

Yes, it certainly does.

Here's what Duff posted on Facebook about the problems that would soon ensue:

I've never been so disgusted, let down, angry or embarrassed as I was today. I've been waiting my entire life for this parade. I've been cheering for the #EAGLES since I can remember. Today #Philadelphiasepta #septa blocked our entire view of the parade after waiting 9 hours taking my kids out of school and WAITING MY ENTIRE LIFE FOR THIS MOMENT!!!! This is forever unforgivable I hope someone loses their job, retirement, and respect for this!!!

A 12-minute video attached to that post shows the horrible misfortune dumped on hundreds and hundreds of fans on the east side of South Broad Street. You get to see the first couple of vehicles in the caravan go by and then, boom, the double-buses arrives near the 6:15 mark.

Suffice it so say, there is a LOT of NSFW language, boos and pleas to move the bus.

It's easy to see why he, and others in that crowd, were upset.

He said the situation quickly got heated, as officers kept coming by and deflecting blame.

"Everybody was getting more aggravated as it went along," he said. "People just started yelling. People wanted to fight, throw bottles. We were trying to maintain some composure. Others around us turned on each other and started fighting.

"The buses left immediately after the procession passed by, getting back behind the parade where they were supposed to be."

Duff said he remembers sitting on his late grandfather's lap watching Eagles games at Veterans Stadium. He said his grandfather was there with him in spirit, so the bus blockage didn't really but a damper on the team's Super Bowl win.

"We just wanted to be there and share they moment as they drove by. I'm by no means a grouple," he said. "But, it made me feel like an a*****e to be one of a few people out of millions who had a bad time when everyone else had a blast. It's an insult."

After the buses passed, the Duff family just walked to where they parked their car the night before and headed back to Jersey, watching the parade via livestream.

"It didn't affect the way we feel about the team. We stand by them no matter what. My kids understand that. They're old enough," said Duff, whose South Jersey tattoo parlors are still offering a special on Super Bowl tattoos starting at $52. "It just got aggravating. I just want people to understand why we're angry. As long as people around us get heard, that's great." 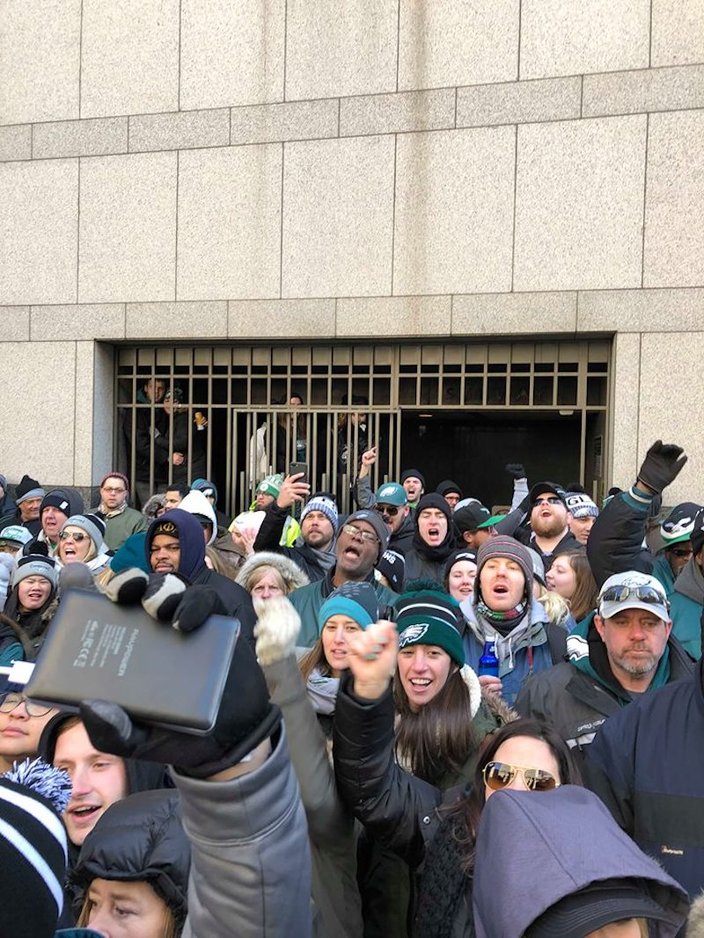 'Everything was amazing up until the actual parade,' said Cindy Broomall, who sent this picture of the crowd she and husband Kevin were around for the parade.

Broomall agreed with that sentiment. Frustration turned to anger on Friday morning, with the caveat that the officers assigned to their area all morning "were wonderful."

"We stood out there for six hours in the freezing cold thinking we'd get an awesome view of the players. It turned out to be a once-in-a-lifetime opportunity just gone," she said. "Everybody's deflecting blame. SEPTA blames the police. The police blame the mayor. I saw a little girl with tears coming down her face.

"I got a quick glimpse of the trophy and think I saw Zach Ertz briefly between the buses. What a waste. There were people around us who came from Virginia, from Harrisburg. Everything was amazing, up until the actual parade."

Contacted for response late Friday afternoon, a SEPTA spokesman deferred blame, saying the bus "was being used for Philadelphia police transport during the parade."

In a Friday afternoon Tweet, which mayoral spokesman Mike Dunn said followed a lengthy discussion about the matter at a press conference, the city said it was "absolutely sorry that it happened."

To those who had their parade view blocked by transport busses yesterday at City Hall: We screwed up - and we're sorry. https://t.co/MCsRRLTda0