Who will be returning kicks and punts for the Eagles in 2019? 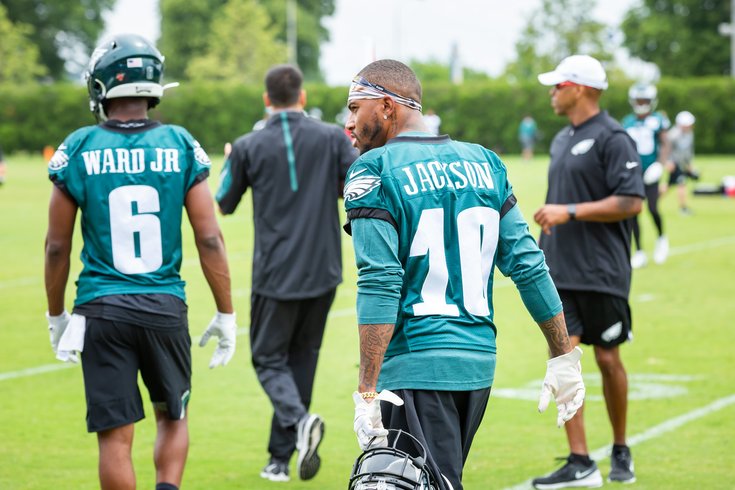 Yep, you'll probably see No. 10 returning punts for the Eagles at some point in 2019.

Not to just repeat the question asked in the headline, but, you know, who is going to return kicks and punts for the Philadelphia Eagles in 2019? I don't know, and neither do the Eagles.

“I do not know the answer to that question yet,” special teams coordinator Dave Fipp said with a smile. “We’ll find out. I'm excited to see this group of guys play in the preseason.”

One player who will be involved in some way as a punt returner is newly added wide receiver DeSean Jackson, who had his share of big moments as a punt return way back when.

"DeSean Jackson will fit into that question somewhere," Fipp acknowledged. "We've talked a lot about that, kinda what his role might be. I would say it this way. I'm sure he'll have a role. Exactly what that will be, I'm not sure that anyone knows that totally yet. As we get into the season and start playing games, we'll find out how much he's playing on offense, how much he's got left in the tank, all those sorts of things will help us determine what he'll do for us.

"There are a lot of variables with a guy like that. How many plays (in the regular offense) is he playing? How old is he? How many plays can he handle? Can he handle more workload? Can he not? Does he want to do it? Does he not want to do it? All those things factor in. If he doesn't want to do it, then he's probably not going to be very good anyway. What's the situation in the game? Are we up by a lot, where it's not worth the risk of an injury or something like that on a play like that? Is the head coach on board with playing him? Is the owner and general manager all on the same page? There are just a lot of variables."

As for whether or not Jackson wants to return punts, Fipp said, "I think he definitely wants to have some kind of role, so I'm definitely excited about that. I've always had a great relationship with him, and he's done a great job for us."

To note, Fipp's first year with the Eagles was 2013, which was Jackson's last year in his first stint in Philly.

"I think it will be more of probably what you're classifying as a high-leverage situation," Fipp said. "Like, you know, game is on the line, more of those situations, obviously not 'huge lead, let's see what he can do back there.'"

"Jackson aside at punt returner," Fipp continued, "we have a bunch of guys; obviously Boston Scott has been doing a bunch of that stuff in (spring practices) here. He's been doing a good job. I would say that he also still has a long way to go, and a lot to prove. He would be an option, and we have some young players. DeAndre Thompkins has done a little bit of it in the past. He obviously has a lot of speed, so we're excited to see what he does. Donnel Pumphrey is coming back in there. I'm excited to see what he does. Marken Michel has done a bunch of really good things throughout this offseason. He has flashed, not necessarily as a punt returner, but enough to make me say, 'Hey he might be an interesting candidate back there.'"

"We had him back there because we knew he was player would could depend on and trust," he said. "He was more of an emergency option for us. Darren Sproles went down, and then he ended up stepping in. We knew he'd catch the ball and get positive yards and he's a good runner. I don't know that he's the same dynamic-in-tight-quarters, start-stop-make-you-miss guy. That's not necessarily his game, but some guys can be productive there even if they don't have all that stuff, and he had a good return for us against Tampa Bay. There was a penalty on it. It got called back a little bit. So he is an option for us, maybe more in an emergency role.

"At kick returner, you're looking at kinda the same group, though obviously DeSean would come out of that equation. You'd like for your kick returner to have a little more size, unless he's super dynamic, really fast."

When asked about rookie RB Miles Sanders as an option, Fipp acknowledged, "For me, he's an intriguing candidate back there. We'll see kind of what his role is, but yeah, I'm on the same page with you. I like the looks of that."