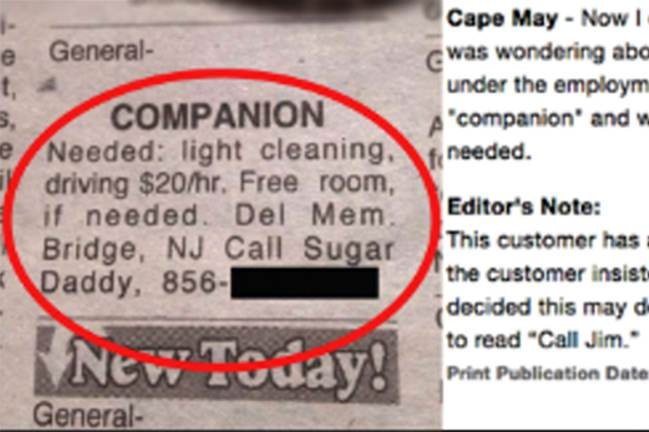 The help-wanted classified ad touted a $20/hr. “light cleaning” gig on the South Jersey side of the Delaware Memorial Bridge. It offered a “free room if needed,” too.

The application process was simple: All you had to do was call the number provided in the Cape May County Herald and ask for “Sugar Daddy.” It was those last two words that raised the suspicions of many readers, including one who wrote into the paper’s anonymous Spout Off section.

“Now, I don’t claim to be an authority on sketchy ads,” wrote someone from Cape May who apparently thought that a “ ’sugar daddy’ looking for a "companion’ " might not have the purest of intentions. (Translation: It wasn’t about cleaning at all, but live-in prostitution.)

A hawk-eyed tipster, with visions of serial killers dancing in her head, noted that the paper had had a discussion with Sugar Daddy, who’d been placing the ad since 2014. “Against our advice,” the paper responded, “the customer insisted on using his nickname in the ad.” He’d since changed it to “Call Jim,” though, because of the applicant-deterrence impact.

Well, we wanted to know more, so we called “Sugar Daddy” on Monday to ask a few questions (this, after getting a voicemail that self-identified as “Master Jim” last week.) The answers we got proved to be surprising.

“I’d get calls from girls at 2 a.m., half-drunk looking to make money, and that’s just not what I’m looking for.” – "Sugar Daddy" Jim Lehman

“Sugar Daddy” is a 61-year-old man from Pennsville, Salem County named Jim Lehman. He has a two-bedroom home not too far from that bridge to Delaware, and he said he decided to update the text of the ad because he “wasn’t getting any answers near the end of summer, when people are leaving the shore.”

“I thought it was funny, but apparently, some people didn’t,” he told PhillyVoice. “The thing is, I was getting calls from women, but they wanted to know about ‘Sugar Daddy,’ not cleaning.”

Jim said he has “low vision,” which means he tries to clean himself, “but I’m sure I miss stuff.”

“It’s a part-time part-time job, not a lot of hours, and it’s hard to find someone I trust enough to let in my house, especially when I explain that I’m blind,” he said. “The only other people I really got who were interested in the job were older than me, with more disabilities, which is a problem because I was hoping to find someone to do some fast-walking and stuff to help me get in shape.

“People wanted to drop their grandmom and grandpop off, so I found a website that said, ‘Sugar Daddies’ and decided to see what happened if I used that name. It wasn’t supposed to be a derogatory thing.”

An anonymous response to the Cape May County Herald's 'Spout Off' section raised suspicions of long-running classified ad.

Jim now understands that people totally took the ad the wrong way – I mean, how couldn't they after Googling the phrase "sugar daddy" – but he still hopes to fill the position at some point. (We won’t include the number here, so as to avoid unseemly calls to Jim’s line, but you can look it up on the Herald’s website or email for it).

And just what was the worst part of this experience for Jim?

“It didn’t work at all,” he said. “I’d get calls from girls at 2 a.m., half-drunk looking to make money, and that’s just not what I’m looking for.”