Brandon Baker: Why South Philly is the best neighborhood in Philadelphia 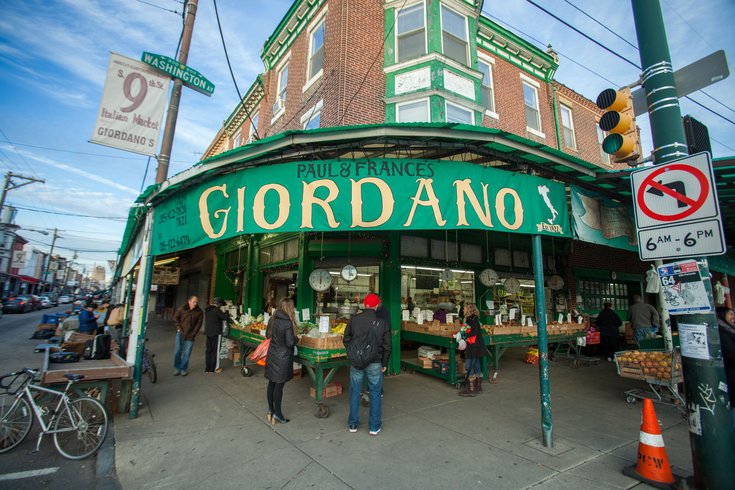 Allow me to lead with this pseudo-disclaimer, because I know y'all will call foul otherwise: I'm not (I repeat, not) a longtime South Philadelphian. I packed up and moved to South Philly in early 2011 after realizing my disdain for dorm life at Temple University (don't worry, I love you anyway, Temple). At the time, I'd spent plenty of dough on SEPTA tokens to visit my older brother at 12th and Ritner streets and found that I appreciated the, for lack of a better word, "homey" vibe the neighborhood had to offer. Of particular note: I derive from a small Pennsyltucky town (Fun fact: The same one "Pennsatucky" from "Orange is the New Black" is named after), so the isolated neighborhood vibe just works better for me. So, when the light bulb lit up and I realized I needed to hightail it out of the Temple area, it was kind of a no-brainer: Why don't I just move to South Philly?

And for four years, that's where I've been. It's been my respite from the "real world" of Temple and Center City, a place to escape at the end of my days. What I've since realized -- especially in the process of writing this -- is that that's the running theme of why I tend to speak so fondly of South Philadelphia in casual convo: I can come back at night and feel like I've stepped into a whole 'nother world, while never once feeling like I'm missing out on the usual perks of urban life. What I've enumerated below, I believe, reflects that feeling and is why I don't trip over a single word when recommending South Philly to out-of-towners or anyone looking for a new 'hood -- no, excuse me, a new home.

1. "Bartender, another round!" Here's the thing: When you make the journey to South Philly for a bar crawl, you're typically coming for a particular (multi-drink) experience. "Let's have a South Philly night!" isn't an unusual suggestion from my friend group, and it comes with certain implicit expectations for the night. Because there are really only two types of nights to be had in South Philly: The "newer" experience includes everything from the hipster dance-party madness at joints like The Dolphin Tavern on Friday nights, to the low-key, craft-beer-and-fries perfection of the Lucky 13 Pub, "The POPE" (Pub on Passyunk East), Taproom on 19th and American Sardine Bar, to the lounge-y offerings of Growlers Bar, Kitchen and Living Room. Alternatively, there's the classic experience: Ray's Happy Birthday Bar (we've all got a story with that one), The [Struggle Bus Express] Station Bar & Grill or -- and these nights are usually my favorite -- late-night excursions to The Republican, followed by the inevitable Melrose Diner trip. A South Philly bar night is like a rite of passage for every newbie to the neighborhood, or to Philadelphia in general -- and for good reason: There's about a 0 percent chance of escaping the night without at least one story that's NSFW.

2. Ultimo: Where one cup of coffee's the equivalent of several anywhere else. I hate to pick favorites (OK, not really), but I've yet to have a caffeine high from a Philly coffee shop that escalates me to the heavens in the same way Ultimo Coffee's standard 12-ounce cup of coffee does. I could shell out $4-$6 for two or three cups of weak coffee elsewhere or just suck up the (admittedly pricy) $2.65 pricetag at Ultimo and be satisfied with the cup (which, I learned, upon asking a barista, has around 200 milligrams of caffeine). Even after I moved farther north and out of the shop's neighborhood earlier this year -- I previously resided at 16th and Moore streets, just around the corner -- I found that I still made the hike in the sub-freezing temps to get my Ultimo Coffee fix. Why? Because, among other reasons, it's worth it to have my morning joe from the country's No. 1 coffee shop. (Top that, other neighborhoods.) 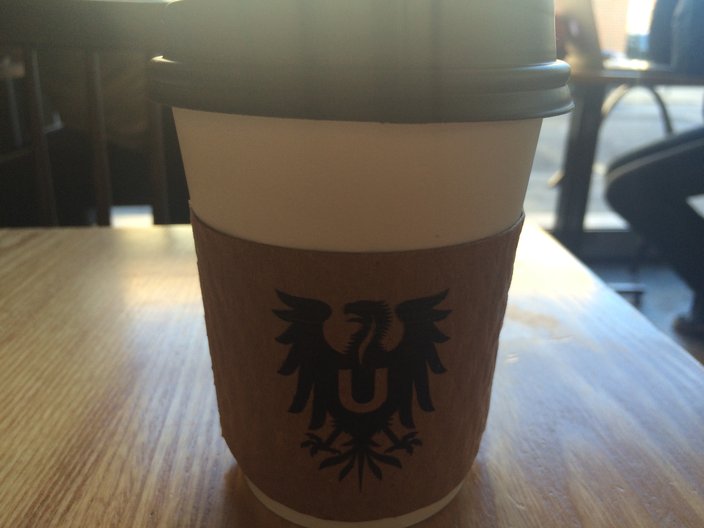 3. Three words: East Passyunk Avenue. Look, there's long been a debate about whether South Philly begins at South Street (it doesn't), but, fact is, who needs South Street when we have East Passyunk? Its offerings are mind-boggling in diversity: Antique stores, boutiques like Metro Men's, top-rated restaurants (lookin' at you, Stateside), the craft beer utopia that is The Bottle Shop, traditions like the Seven Fishes Dinner and a pretty swanky fountain space where I often hear Celine Dion and other operatics crooning a few tunes from the speaker system as I pass by. And, if nothing else, the avenue's got Chhaya among its tenants; aka, host of the best breakfast in the city. (Tip: Get the muffin basket and The Kate.) Point is, East Passyunk isn't just the "New South Street" or any silly headline-grabbing label like that -- it's better.

4. Christmas in South Philly. Explaining in writing what it feels like to experience Christmas in South Philadelphia is like trying to explain to anyone why center-of-the-street parking on South Broad Street is a thing: It just can't be done. But I'll tell you this: It goes beyond the "Merry Christmas" banners strung on and just off East Passyunk Avenue and the green-and-red bulbs that illuminate streetscapes. It's less about the lights and more about the love. I had three neighbors on my block -- whom, I promise, I've never had any meaningful interaction with -- bring me plates of Christmas cookies this year. And no, it wasn't even a selfish post-holiday dump-off of leftovers, as I'd normally expect. South Philly's not just a neighborhood during the holidays; it's a family. (Sappy, but true all the same.) 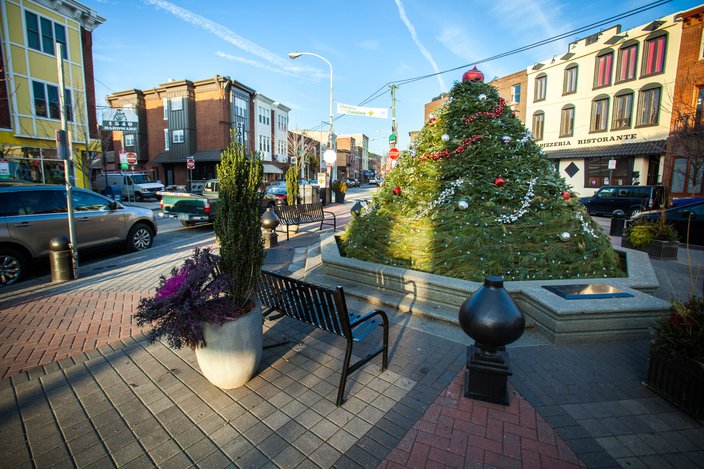 The tree at the fountain is just one feel-good component of the holidays in South Philly. / Thom Carroll, PhillyVoice Staff Photographer

5. The Italian Market: Ground Zero for Italian and Mexican food in Philly. Santucci's, Veracruzana, Anthony's Italian Coffee House, DiBruno Bros. (the real one), Isgro's -- good Lord, I could drone on and on about the Italian Market and all the delectables that have plaqued up my arteries these past few years. And while the produce is hit-or-miss, that the lineup (an extensive one, at that) is there at all is more than many other neighborhoods can tout. It almost (almost) makes up for our tragic lack of a Whole Foods -- but, fingers crossed for that grocery store set to open at the corner of Broad and Washington streets. 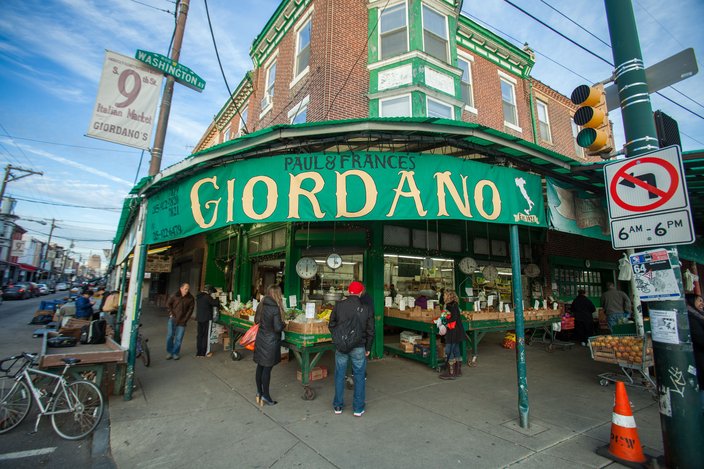 6. The Navy Yard. A few years ago, there's no way you'd find the long-struggling Navy Yard on this list. But, now that Marc Vetri's opened Lo Spiedo, I've never been more hopeful about a particular section of South Philly. Granted, I'm not spending my Saturday afternoons traipsing about the largely empty square or lodging at the new Marriott (yet), but with the Pennsylvania Horticultural Society hosting festivals at the Yard and new-age office buildings like Urban Outfitters (if you've never been inside, it's worth the trip -- they've got an open-to-the-public cafeteria and coffee lounge with a rad international magazine selection) starting to sprout, the area is starting to go from a flatline to displaying at least a few jagged lines on the monitor. Plus: the International Great Beer Expo is headed there in May. Crushin' it.

7. A slice of suburbia. True, I wouldn't count this among the major selling points of South Philly, but it is pretty convenient to not have to dedicate an entire day to traveling down Columbus Boulevard from North Philly to access all my big-box goods -- everything from Target, to Best Buy, to IKEA and Wal-Mart (c'mon, we all shop there sometimes). Also: John's Roast Pork -- that tiny stand between Lowe's and IHOP -- is the real deal for a pre- or post-shopping bite. And if that's not the slice of suburbia you're looking for, then take a stroll through Girard Estate; you'd swear you were in Chestnut Hill and not deep South Philly.

8. SoPhilly: Keepin' it real since ... well, ever. For perspective, as I'm writing this, I'm sitting next to a group of 20-something hipsters gabbing about a fellow friend nicknamed (I hope) "Jiggy" and the wild night one of them had on Saturday after tripping on a mushroom. Get real, folks: Where else are you going to get this honest-to-goodness slice of reality? And I'm not just talking about hipsters and their wild escapades, either; I'm also talking about those traditional South Philly Italians who define our Philly brand of dialect with some, uh, "color"; the "neighbor" who knocks on your door at 10 p.m. and offers to sweep your stoop for $5; the angry rolling-stop drivers who constantly try to run you over mid-crosswalk; and the woman who -- and this really happened -- chased me down South Broad Street at full speed at 2 a.m. while lobbing profanities at me. Alas, you'd think I'd hate this neighborhood, all things considered -- but all of these occurrences combine to make the neighborhood feel more ... honest. You get the good and the bad, but all that bad makes the good feel pretty great.

9. The sports complex. Where are those sardine-packed subway cars going on a Sunday afternoon in the fall? Not northbound, that's for sure. The sports complex is practically a Philly identifier -- a cultural staple, a mark of significance, a reason to not sleep off your hangover but instead go all "hair of the dog" by noon on a Sunday. And yes, OK, I admit it: I don't even like sports. I couldn't tell you the first thing about a first down or the bottom of the ninth or whatever lingo I hear y'all speed-balling in your obnoxiously loud conversations during games. I'm happy to admit that I'm just there for the overpriced Miller Lite that, somehow, tastes better during baseball and the high-school-football-game-like experience of walking in a circle and spinning the latest Philadelphia gossip with friends and cohorts. And where else are you going to do that, other than -- maybe -- Continental during weekday happy hour? Last I checked, NoLibs ain't got a stadium in the works. (Though never discount the possibility, as long as Bart Blatstein is around.) Oh, and we're getting that second Philly casino nearby. So, there's that. 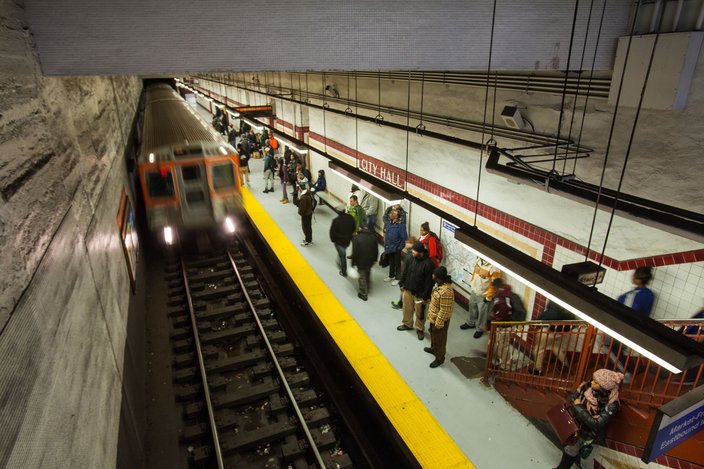 10. There's no place like home. Fine, so South Philly's not exactly a farmhouse in Kansas. But as someone who grew up in a small-town environment, I appreciate the blue-collar roots that have, in recent years, blended with the values and culture of the "young professional" crowd (see: GradHo and Newbold). With a few exceptions -- and there are always exceptions -- you can live in South Philadelphia (for cheap, no less) and be yourself. You're gay? Be gay. A transplant from California? Welcome to the neighborhood. An immigrant? Here's a neighborly fruit basket. It's the melting pot of Philadelphia. And yeah, it's a place where, in truth, not everybody is going to know your name -- but quite a few more will here than if you lived in Rittenhouse.