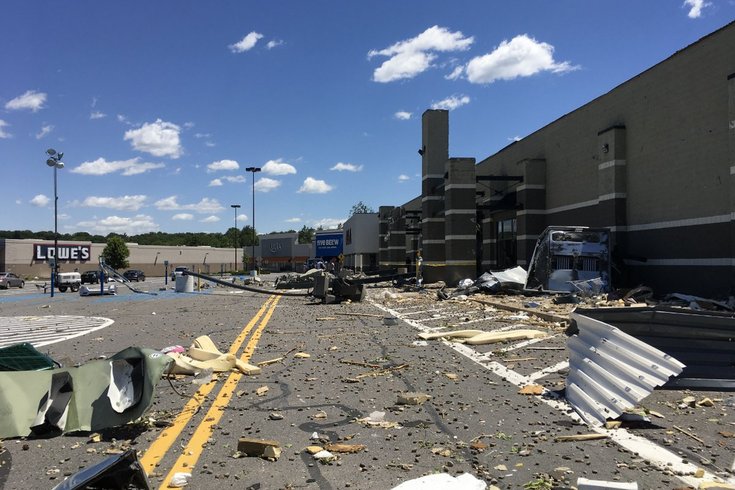 This image from the National Weather Service shows the aftermath of a destructive tornado that touched down in Wilkes-Barre Township, Pennsylvania, on the night of Wednesday, June 13, 2018.

New videos show the aftermath of a tornado that swept through Northeastern Pennsylvania on Wednesday night.

The National Weather Service confirmed Thursday that an EF2 tornado, which produces winds between 111 to 135 mph, touched down in Wilkes-Barre Township near the Wyoming Valley Mall around 10 p.m.

Numerous roofs were destroyed, windows were blown out, structures were knocked off their foundations and power poles were snapped during the storm, according to the NWS. There were six minor injuries and no fatalities.

The Wilkes-Barre Township Police Department said Thursday a state of emergency has been declared and a curfew has been put in place as authorities clean up the destruction.

According to police, somewhere between 20 to 25 buildings have been assessed for damage so far. Some of those structures were irreparably damaged and have been condemned, some have been classified as currently unsafe, while others have minimal damage but are still unusable because of utility interruptions.

Several YouTube accounts have published drone videos that show the extent of the destruction. The videos show some stores completely destroyed. Other buildings have significant portions that have collapsed, while debris can be seen scattered across parking lots.

You can watch some of the videos below.