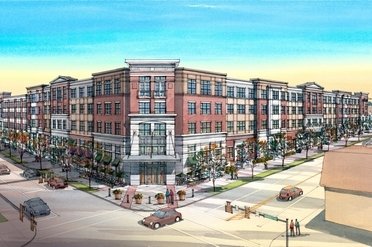 Rendering of Station at Willow Grove in Upper Moreland Township.

A wave of change in Willow Grove, long anchored by the mall and surrounding outlets, will soon bring a $75 million apartment, office and retail complex to one of the busiest intersections on Route 611 in Montgomery County.

Situated across from the downtown Willow Grove SEPTA station, the project will bring 275 luxury apartments to an area that has seen an influx of new business in recent years, from a super Wawa to the restaurants at The Grove shopping center.

The Willow Grove Park mall is also in discussions to add an 11-screen movie theater in the coming year.

J.G. Petrucci reportedly bought and demolished five properties – including the popular Mandarin Garden restaurant, which closed in February – from different owners to clear way for the project, named Station at Willow Grove.

The project is viewed as an attraction for its proximity to both the SEPTA station and the Willow Grove interchange of the Pennsylvania Turnpike.

Office space at the project is targeted toward tech and medical companies, as well as shared arrangements.

Construction on the project is expected to begin in 2019.