Wing Bowl legend was hoping for one last hurrah, but brain surgeon prevails 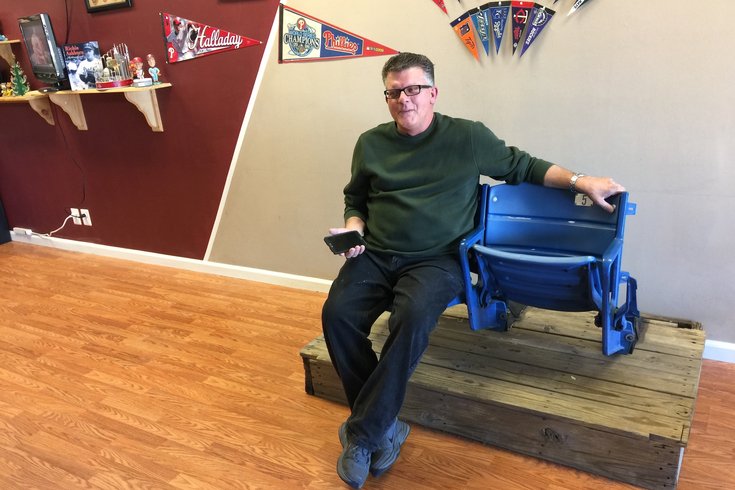 'Arson' Arnie Adkins, a regular WIP morning-show caller and Wing Bowl staple, learned last month that an aneurysm would prevent him from competing in the gluttonous tradition's 25th event next Friday at the Wells Fargo Center.

The neurosurgeon couldn’t help but laugh.

Cutting through someone’s skull to repair an aneurysm is serious business. Both he and his patient knew that. Still, the latter wanted to know what he could – and, more specifically, couldn’t – do in the weeks between Tuesday’s consultation and the surgery on February 16.

“Is it OK if I do this chicken wing contest?” Arnie Adkins asked.

The Hospital of the University of Pennsylvania surgeon – “he’s got the look of the Beverly Hills doctor, y’know the nice tan, the blond hair” – was cool with it at first.

“How many you gonna eat?”

He wasn't. They told Arnie that’s what a normal person eats in six months, and how it would jack up Arnie’s already semi-high blood pressure, not to mention elevate the possibility of bursting that aneurysm.

Ten, 20 wings wouldn’t cut it, obviously. So, yeah, Adkins won’t be competing in his 7th (and what would’ve been last) Wing Bowl next Friday.

That bums out the 54-year-old from Washington Township in South Jersey (by way of South Philly). It’s not like there’s much wiggle room in the choice between Wing Bowl and possible death, though.

He can go to the event, and he will. He just has to make a couple of concessions, his doctor advised.

“He said, ‘I need to let you know this is no joke, this is serious, but you’re gonna be OK. Live your life. But don’t do nothing extreme like eat 150 chicken wings in 20 minutes.'”

'OK, ARNIE FROM SOUTH PHILLY. YOU'RE IN'

Cataldi and his crew have known Arnie for decades now.

A product of South Philly, he grew up at 11th and Porter, hung out at 9th and Porter and went to St. John Neumann High.

Back in the early '90s, Arnie owned four taxi cab medallions. It was tedious work, owning and driving a cab, but that offered a pathway into the underworld of sports talk semi-celebrity.

He doesn’t remember the exact year. Could’ve been 1992, 1993 or 1994. But one day, he was listening to Cataldi’s show – then with Tony Bruno on 610AM – when he caught word of a contest in which Miller beer would give $10,000 to the listener who performed the most outrageous stunt.

“I kept hearing all these contestants, thinking these people are pathetic,” he recalled while sitting in a vintage Veterans Stadium seat in his son Chris’s barber shop on Wednesday afternoon, his daughter Lauren sitting not too far away.

“So I called in, got on air and said here’s what I’ll do: I’ll shave all my hair off, put it in a jar, fill it with Tabasco sauce, dip 61 fish in it and eat them." The response: ‘OK, Arnie from South Philly: You’re in.’”

When the Miller contest went live at an area watering hole, Arnie figured he was going to lose. One of the other contestants was a woman who dipped herself in a vat of chocolate and invited audience members to have a taste.

“I took the mic and said, ‘I’m gonna drink the hair of the dog that bit me.’ I knew that was a bar term,” he said. “So, I filled a glass with hair and hot sauce and started playing to the audience, and drank it.”

He won, was invited to Wing Bowl 3 and competed in the next six contests, sparring with Pennsylvania’s then-boxing commissioner in the eighth edition for show. He dove back into Wing Bowl 17 and established himself as a regular caller and civilian hype man for WIP’s annual exhibition of gluttony.

He trained by eating frozen Tootsie Rolls. One year, a frozen candy cracked his tooth a couple days before the competition. He instructed the dentist to just remove the remnants. He couldn’t miss Wing Bowl. That’s the time he downed 150.

The “Arson” name was bestowed upon him for downing a Scotch bonnet pepper that made him feel as if he could “jumpstart a Space Shuttle” when it was on its way out.

Adkins is a beloved character of sorts in that subculture, even though he’s near the top of a “Wing Bowl villains” listicle. People feel as if they know you personally when you provide regular updates of your first son’s birth for the radio audience.

His specialty was walking “Wingettes” into the arena or riling up the audience to “hate” contestants who, say, liked the Dallas Cowboys.

In his real life, Adkins was a lineman for a local telephone company. Aging and ailments did not mesh well with that trade.

He fell a few times at work. One year, he had to get a knee replaced. The next, he got the other replaced.

In 2012, a conversation with a dying uncle with whom he'd lost touch led Adkins to see whether the tired legs were symptoms of a “hereditary problem” with which he wasn’t before familiar. That’s how he found out he suffered from muscular dystrophy.

“Here I am just thinking I’m getting old. Six specialists all said the same thing: I had a neuropathy issue,” he recalled. “That put me out on disability. You can’t climb poles with that. I haven’t had a full-time job since.”

The move to South Jersey came after he unloaded the taxi medallions.

Still a regular caller, and off-air friend of Cataldi, Adkins was asked by the crew if he’d perform in the “Legends” competition at next week’s Wing Bowl 25. He was game. He thought he could win, too. His friends with the South Philly Vikings Mummers crew even gave him a costume to wear.

That all changed about a month ago, when headaches sent him to Kennedy University Hospital in Cherry Hill looking for answers.

'I ONLY GOT ONE BRAIN'

An MRI revealed “a five-millimeter aneurysm, dude, that’s unrelated to your headaches.” Doctors wanted to schedule surgery to repair it on the spot.

Adkins wanted to slow the process down.

“This ain’t a broken bone here. This ain’t stitches,” he said. “I asked the doctor if he was board-certified. I don’t even know what that is, but are you board-certified? He said I’m board-eligible. So I said, ‘then, no. The answer’s no. I don’t mean to be rude, but I only got one brain.’

"I think the doctor got mad at me for interviewing him like that.”

He called his sister – “the family genius” – with the news. She called back with a list of surgeons within the HUP system.

That led to Tuesday's discussion about the surgery coming Adkins way next month. To medically trained minds, the repair surgery addresses a weak area in a blood vessel that causes it to bulge, balloon out or sometimes rupture.

Adkins described it as getting a “credit-card sized” hole in his skull to address what’s essentially “a straw with a pimple on it, and the pimple is what they gotta fix. The straw represents the artery and the flow of blood. (They have to figure out) how do we clog that pimple without disturbing the flow of blood to the brain.”

The HUP surgeon reassured him the size of the aneurysm means that there’s no urgent rush to repair it – some people live their whole lives without even knowing they have one of that nature, he said he was told – but to get to the hospital immediately if he “feels something in his head.”

"Even with a brain aneurysm he was ready to compete. Now, he has accepted the fact that he can't." – Angelo Cataldi

It’s not as if Arson Arnie delayed surgery so he could go to this – possible the last-ever – Wing Bowl. He had to get in line for his surgeon’s services.

Sure, he’d have preferred to compete. But that’s hardly as important as staying healthy to enjoy more time with his wife Cindy “who has been nothing short of spectacular with this."

During an hour-long conversation at Gentlemen’s Cuts Barber Shop – a business that he doesn’t plug during WIP-airtime because, even though he and Cindy gave their son start-up capital, it’s not fair to others who pay for advertising – he shifts between comical recollections of his building an unusual friendship with a talk-show host.

That's for good reason. He's appreciated by the king of that kingdom.

"Arson Arnie is the embodiment of what makes SportsRadio 94WIP's Wing Bowl special. Even with a brain aneurysm he was ready to compete," he said. "Now, he has accepted the fact that he can't, but he will be there as well before brain surgery. Why is Wing Bowl big? Because of people like Arson Arnie who always embrace it under the worst and most adverse conditions."

FEAR AND LAUGHING IN WASHINGTON TWP.

As for next Friday, he'll still be in attendance, and he'll still help rile up the crowd. He’ll just take it easier than normal. He’s going to bring his son Chris this year, a fitting Wing Bowl coda considering the live-birth updates of 24 years prior.

The “Arson Arnie” persona has always gotten recognition by strangers – thanks to the distinct voice and several TV appearances on sports shows back in the day. It can be a bit odd when people think he has some sort of say in Eagles personnel moves, though.

“If I never call in again, not to brag and boast, but everybody (in the local sports world) will know who I am, and it’s all because of Angelo,” he said. “It’s ridiculous that a caller develops that kind of relationship with a host.” 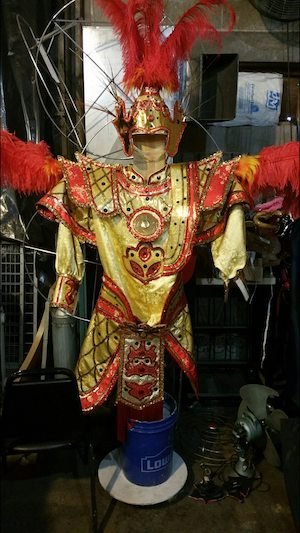 He knows the station is planning something in his honor next Friday. Ever curious, he’s ruled out some possibilities and has a “vague idea” about what’d be his preferred one.

Let’s just say Arnie joked that he wouldn’t mind “seeing my name in the (Wells Fargo Center) rafters. How many people can say their name’s hanging next to Bobby Clarke’s? If it ain’t, it ain’t, but if that’s what they’re doing, I’m making my son get a 4-foot by 4-foot picture to hang up in here.”

That’s less important than waking up from the February 16 surgery with a repaired brain, and fully functional body, though.

I asked Arnie if he was worried about the aneurism that afflicts him early in our conversation. As he wound through a litany of entertaining stories from his years in the WIP realm, he regularly returned to that reality without prodding.

“Of course I am. Dude, you gotta be crazy not to be worried. I got an aneurysm in the f****** head. What if it breaks right now? I might be dead before they get me to the hospital,” he said at one point.

He tried to cloak those fears during the Tuesday call to WIP’s morning show.

“I’ll joke with them, ‘Ah Doc, once you get in my head, you ain’t gonna find much in there,’” he said. “But that’s just joking around. You’re goddamn right I’m concerned, dude.