The faithful of Philly and beyond responded 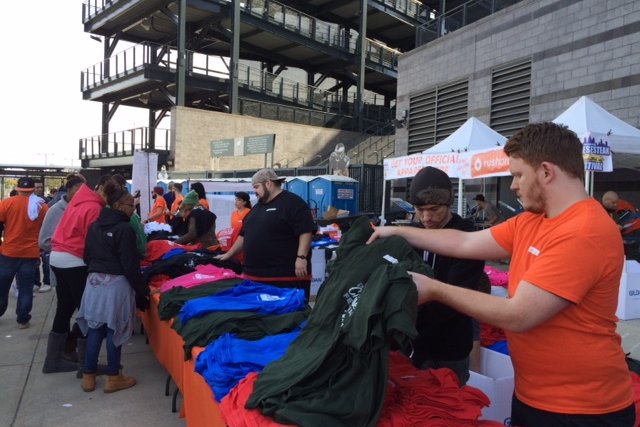 T-shirts with the word "Wit" were big sellers at the city's first cheesesteak festival.

Which of course means: A slightly hollowed out locally-baked crusty roll, a good dollop of glowing orange goo – traditionally Cheese Whiz – (but on this point, wise men differ), with fried onions.

Oh, and with ketchup, please, no mustard, lest you start a fistfight.

Organizers brought in about 50 mostly steak vendors – is a vegan cheesesteak really a cheesesteak? Does jerk chicken truly make the cut? – fired up rollicking music, installed some carney rides, assembled a giant cheesesteak and held an eating contest.

The faithful of Philly and beyond responded.

The festival, at the parking lot next to the Linc, sold out, even with the top-tier tickets hitting $60, promising 20 sandwich samples, a T-shirt and special seating in return.

The Engler clan of Baltimore – home of the crab cake sandwich – drove north to sample.

“Last year we talked about coming to Philadelphia and doing a circuit of cheesesteak places, from the high-end places to street vendors.

“Well, that didn’t happen, but about three months ago I saw an ad for the festival. It was everything we wanted in one place."

What was it about cheesesteaks that drove the grease-stained dream of the Englers?

“Because they are good!” shouted Mary Beth Engler, 29.

The Englers came to the festival on $40 tickets that netted them a T-shirt and 10 sandwich samples. Just what was their game plan?

“To sample as much cheesesteak deliciousness as possible.

“And naturally, we’ll try both Pat’s and Geno’s,” he added.

“There’s some rivalry there, I hear.”

Clearly, the word has gotten out about Philly’s native dish -- and some of its epic mythology.