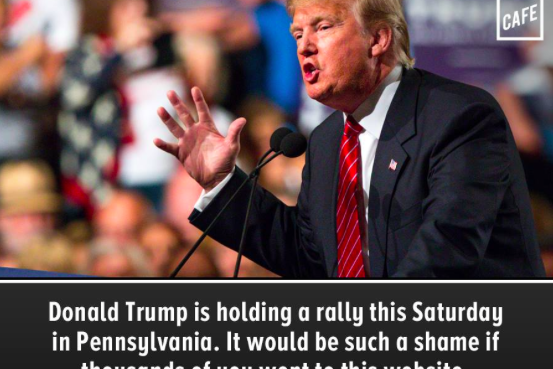 President Donald Trump will mark his 100th day in office Saturday with a rally in Harrisburg, where he is expected to play his administration's early progress despite steady criticism of its shortcomings.

One North Carolina woman, acting on a meme, is trying to see to it that there are a ton of empty seats at the rally, an echo of ridicule the president received after overstating the crowd size at his inauguration on January 20.

Susan Mayo's wily campaign drew attention when her daughter Becca, a student at the University of Minnesota, received a text message informing her that she had been registered for tickets to the rally, which kicks off at 4:30 p.m. at the Pennsylvania Farm Show Complex & Expo Center.

"I was really confused at first because it was completely out of the blue," Becca told BuzzFeed.

Susan Mayo said she was inspired to register as many people as she knows after learning of the ploy from the following meme.

Others who caught wind of the effort shared their approval of Mayo's handiwork on Twitter.

@jewish_beyonce give your mom a big hug. she's doing the lord's work

Last May, Trump drew about 12,000 people to the same venue in Harrisburg. About 5,000 couldn't even get into the venue. How many people turn up Saturday might be a good indication of where his support stands in Pennsylvania after 100 days.