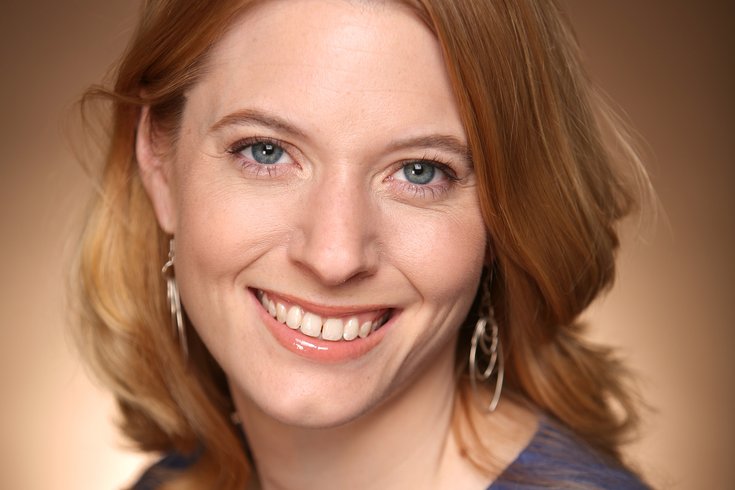 Vanderkam is a productivity guru who writes about time management and work-life balance.

The stereotypical frenzied career mom is guilt-ridden, starved for sleep and on the brink of a breakdown. In her new book, "I Know How She Does It: How Successful Women Make the Most of Their Time (Portfolio)," Laura Vanderkam uncovers the less familiar story of high-earning women who work less than you’d expect, spend quality time with their families and even find time to relax.

Vanderkam is a productivity guru (author of "What the Most Successful People Do Before Breakfast" and "168 Hours: You Have More Time Than You Think") who writes about time management and work-life balance. She lives in Gladwyne with her husband and four children (ages 8, 5, 3 and 5 months).

Over the years, Vanderkam heard the horror stories of maxed-out working moms and experienced her own harrowing moments. She set out to examine whether an emphasis on the bleak anecdotes — the school play missed due to a late flight, for example — present a distorted image that may discourage young women from pursuing careers in industries like finance, law and medicine.

“The reason I looked at this group of women is because I wanted to get at this idea of the demanding jobs,” Vanderkam says. “Those are the ones that people are often gnashing their teeth about — that women can’t do them and have a fulfilling personal life.”

When she analyzed the diaries, Vanderkam did find crazy travel schedules and late nights at the office, but the big picture was more positive, with many of the women fitting in relatively reasonable hours at work along with meaningful interaction with their kids and partners — and often getting an adequate amount of sleep.

Rather than trying to cram everything into 24 hours, Vanderkam focuses on the 168 hours in a week. “If you work 40 hours a week and sleep eight hours a night, that leaves 72 hours for other things; it’s a lot of time,” Vanderkam says. “You just have to be creative about how you move it around.

“Fortunately, so many women in this book had the flexibility to go to a preschool brunch at 11 a.m. on a Tuesday and be there for that and then go back to work, or work from home that day. It wasn’t the harsh trade-off that we assume is going to happen.”

To be sure, the women featured are part of a privileged group: They often have some autonomy at work and can afford to pay for quality child care and outsource domestic tasks.

"I Know How She Does It" includes individual completed time logs and highlights many strategies used by these high achievers. Here are some of Vanderkam’s findings and recommendations:

Ask for forgiveness, not permission

Unfortunately, many U.S. workplace cultures are sorely lacking in family-friendly policies. At the same time, “Flexibility is less about policy than about the reality on the ground,” Vanderkam writes. Rather than explicitly asking for a modified schedule, Vanderkam suggests trying an under-the-radar approach to fitting in personal activities during traditional work hours, and vice versa. “Men are more likely to seek forgiveness rather than permission, and I think that women should feel empowered to do that as well,” she says.

“A good thing about keeping track of time is a lot of women saw that the story they’ve been telling themselves that ‘I never see my kids’ is completely false. They saw their kids a lot,” Vanderkam says. “What women see they’re giving up is often personal time; it’s not going to be the kids who suffer.”

“You’re better off seeking out flexibility within a full-time schedule if you can do that. And if there’s no accountability for hours, taking an 80 percent schedule is a particularly bad idea,” Vanderkam says. You could end up getting paid less for the same amount of work and not advancing. Instead, just try not working 20 percent of the time and see what happens.

Use found bits of time

Vanderkam was inspired by the women in the book to make better use of her own unexpected pockets of time. “The other day when a phone call was moved, I hopped on my treadmill to do another mile; it wasn’t much, but it was better than nothing,” she says. Keep a few rejuvenating activities, like calling a friend instead of mindless Web surfing, in mind for the next time a meeting ends early.

“Time passes whether we think about what we want to do with it or not, and it’s easy to get to what could be leisure time and not know what you want to do,” Vanderkam says. “I encourage people to make lists of all of the adventures they’d like to have,” she says. “And plan your weekend by Wednesday — that’s always a good strategy.”

Work a “split shift,” but set a bedtime alarm

Vanderkam found that many successful moms leave their offices at a reasonable hour and work from home later in the evening. “If I’m going to work after the kids go to bed, I have a to-do list for that time,” Vanderkam says. “I’m not trying to clear out my entire inbox by the next morning, which never happens.” She also suggests setting a bedtime alarm to give yourself time to wind down.

Ask “What does the good life look like for me?”

“I’m certainly not about trying to schedule every minute — that’s a somewhat false impression that people have of what it means to use your time well,” Vanderkam says. Thriving working moms take the hectic weeks in stride, prioritize leisure time and savor calm moments. “Do the important stuff first and trust that the other stuff will fill in around the edges,” she says.