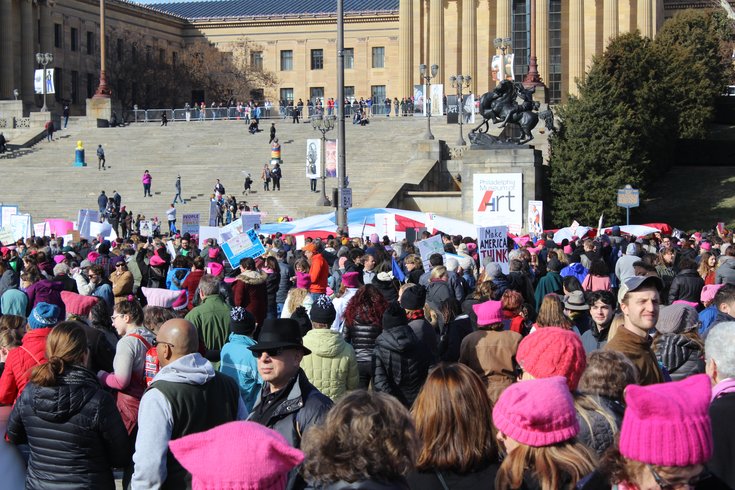 The third annual Women’s March returned to Philadelphia on Saturday, while national marches were mired in controversy.

The Women’s March on Philadelphia, organized by a group called Philly Women Rally, saw thousands turn out on the Benjamin Franklin Parkway.

This Philly march wasn’t connected to the national marches that took place Saturday. A number of organizations, including the Democratic National Committee, dropped their support of the national Women’s March amidst allegations of anti-semitism against leadership of the March.

It may have been hard at times to discern which group marchers were a part of, but the message — for women’s rights; against President Donald Trump — was clear.

Hard to tell crowd size at this point, but certainly 1000+ so far w/ more joining pic.twitter.com/nC8riEv3d8

Here at the Women’s March in LOVE Park. This is what the scene is like: pic.twitter.com/yFLLDeJyHt

Glad to finally be at a Philly Women's March that is nonbinary/trans-inclusive and organized by folks who have no patience for racist infrastructure like police checkpoints! pic.twitter.com/YV0MDi0rgb

Here’s the view from Logan Square for this year’s #womensmarchPHL pic.twitter.com/I71zd2F2fl

Delco Dems at the Women’s March in Philly! pic.twitter.com/eXfvLWN0hR

Ashley Reyes is holding a sign with a drawing of Christine Blasey Ford that says “You can’t silence us.” She’s here “because nothing happened to Kavanaugh,” she said pic.twitter.com/RIpPqXDbAh

Dr. Nina Ahmad, scientist and former deputy mayor of public engagement, praises the wins of diverse political candidates and the #metoo movement. She said there will be more action: “My message to sexual predators: We’re coming for you.” pic.twitter.com/diFnY6Cmy4

This is a developing story, and will be updated throughout the day.