FIFA selects North America to host the 2026 World Cup; now, the city will compete to bring matches to the Linc

The United States men’s soccer team won’t be competing in the FIFA World Cup starting on Thursday, but the nation – and its neighbors – got some great news regarding a future edition of the quadrennial event.

On Wednesday, the 68th FIFA Congress selected the united bid of the United States, Canada and Mexico over a bid from Morocco to host the World Cup in 2026.

“Hosting the 2026 FIFA World Cup is a rare and important moment to demonstrate that we are all truly united through sport,” said Carlos Cordeiro, president of U.S. Soccer and co-chair of the United Bid.

It’s also – according to US Soccer – a chance to produce $5 billion in projected economic impact as an expanded field of 48 teams competes across the continent.

That impact could be seen locally as Philadelphia is one of 23 cities proposed as potential host sites. (Local games would be played at Lincoln Financial Field.) Canada and Mexico each have cities while 17 are in the United States.

Even the potential of Philadelphia hosting some World Cup matches – which it didn’t do when the U.S. last hosted the tournament in 1994 – has local officials excited.

That includes U.S. Sen. Pat Toomey, who was among a bipartisan group of 43 senators who urged President Trump to support the bid.

"I'm happy to see United 2026 was selected to host the World Cup,” he said on Wednesday. “Not only will U.S. Soccer get an automatic bid (to compete in the tournament), but Philadelphia has a great chance of being one of the host cities.”

Mayor Jim Kenney also touted the merits of Philadelphia as a host city in 2026, a year that will mark America’s 250th birthday, or sestercentennial. Philadelphia is known as the cradle of liberty, and the bicentennial celebrations here in 1976 were a big deal, if you're old enough to remember.

Kenney cited the city’s track record of hosting major events like the 2017 NFL Draft, 2016 Democratic National Convention and 2015 visit by Pope Francis as evidence that Philly’s up to the task.

“Philadelphia is the perfect staging ground for an international event like the World Cup,” he said. “We have a thriving hotel sector, robust restaurant scene, and the transportation infrastructure to accommodate visitors from around the globe.

"2026 also marks the nation’s 250th anniversary, so this would be an ideal location and occasion to celebrate that milestone on an international stage.”

"Our Philadelphia team – including the City, Eagles, Union, Eastern Pennsylvania Youth Soccer and many others – is very proud to be a part of the process," he added.

Since it’s a joint bid, common thinking holds that six sites will be in Canada and Mexico with the other six spread across the United States.

The official bid cited listed MetLife Stadium in North Jersey as the likely site of the final match and offered Atlanta and Dallas as likely sites for semifinal matches. No stadium will host more than seven matches. 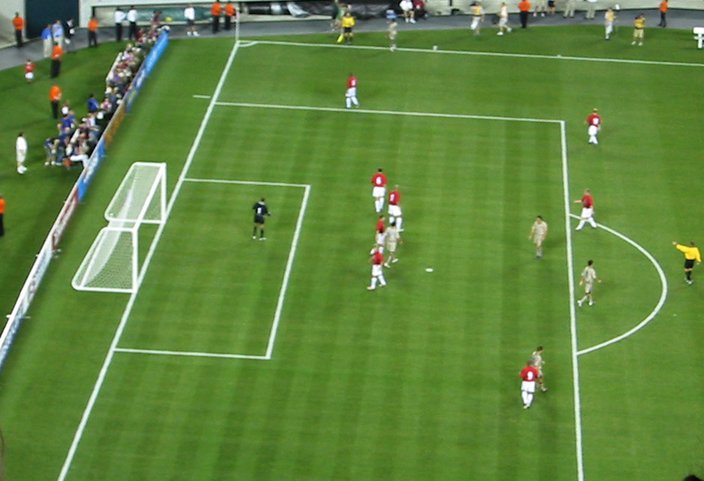 Manchester United plays FC Barcelona in a friendly to open the new Lincoln Financial Field on August 3, 2003. It was the first event held in the then-new stadium.

According to U.S. Soccer spokesman Neil Buethe, there is no set timeline for FIFA to make the final host-site decisions, but it won't likely happen before 2021.

It’s hard to imagine FIFA, the sport's governing body, not considering the merits of a match in Philadelphia on the Fourth of July in such a momentous anniversary in the nation’s history.

It’s also hard not to see, in the eight years leading up to the tournament, cities fighting to host games much as they are competing to attract Amazon's second headquarters, vying to show investment in the sport outside of the event itself.

Lincoln Financial Field has a track record of hosting matches between international teams, dating back to 2003 when the first competition inside the South Philly stadium was a match between FC Barcelona and Manchester United.