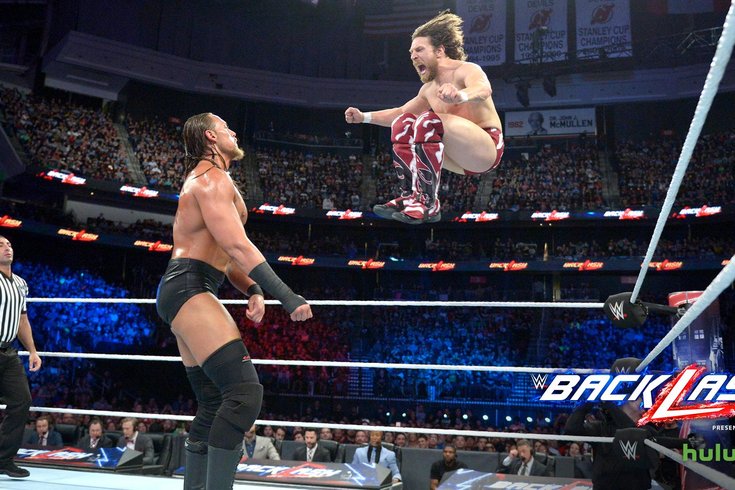 Sunday night was Daniel Bryan’s return to the ring in his first singles match on pay-per-view since being cleared.

The Prudential Center in Newark, N.J. was the site for the first WWE pay-per-view after their Superstar Shake-Up, which took place a week after WrestleMania, and it should be noted the card was pretty stacked because of it.

Off the heels of the Greatest Royal Rumble in Jeddah, Saudi Arabia, where nothing of note happened storyline-wise, Backlash was WWE’s first opportunity since the brand extension in 2016 to really make their B-show pay-per-views feel special again. I mentioned months ago when WWE booked Reigns vs. John Cena at No Mercy in October that it automatically made that an A pay-per-view. Since then, it’s been clear WWE’s main focus is to make their fans buy into these other pay-per-views as being just as important as the bigger ones. Maybe that’s why WrestleMania just didn’t feel like WrestleMania.

But on Sunday night, the main roster was definitely trying to move forward and begin anew. We had various SmackDown vs. Raw matches given who moved rosters during the Superstar Shake-Up, and that made a lot of the outcomes seem very predictable.

Then again, WrestleMania seemed very predictable, and many of the outcomes were not. Would the same thing happen at the Prudential Center Sunday night? Let’s get to it.

During the Kickoff Show, Bayley approached Sasha Banks in the backstage area and asked if she’d be in her corner tonight. Bad move, of course. The two bickered again back and forth, which is hopefully leading to an eventual main event at a pay-per-view. While the story hasn’t been a huge main focus on Raw, there’s still the possibility a main event at a pay-per-view can happen due to Bayley and Banks being able to deliver a top-quality match, so I’m still holding out hope.

On the other end, Ruby Riott had her squad in her corner. They didn’t come into play much, but Bayley still decided to go after that while hitting the ropes, hitting Logan with a hurricanrana, which may have hurt her neck. She started selling the neck and couldn’t get a pin on Riott, eventually succumbing to the Riott Kick.

The first Raw vs. SmackDown match came with the WWE Intercontinental Championship on the line. Seth Rollins, who won the title at WrestleMania, defended against The Miz, who was sent to SmackDown during the Superstar Shake-Up. During the Kickoff Show, Miz approached Bo Dallas and Curtis Axel in the locker room, thinking they’d be at his side during this match and reunite the Miztourage.

That didn’t happen. And it’s a good thing it didn’t, or else it might’ve ruined an otherwise great match.

Miz and Rollins brought their A game for sure, pulling in one of the best pay-per-view main card openers in recent memory. Rollins’ selling of his knee and Miz doing everything possible to capitalize on it was great storytelling, which we don’t get enough of nowadays in WWE. I thought Rollins would retain, but there were two times where I legitimately bought Miz would become a nine-time Intercontinental Champion.

Rollins kicked out of two Skull Crushing Finales, which made him going for the last one from the middle rope make a ton of sense. Only, he didn’t get to hit it, and Rollins countered. Even while selling his knee, Rollins went for the Blackout and hit it on Miz, getting the victory. A great match and worth going out of your way to watch it if you missed it.

There was nothing that could follow up that opener that would’ve rivaled it, but this match just didn’t click on all cylinders. Bliss got some good offense in and Jax sold well, but it wasn’t really any different than their tilt at WrestleMania.

Jax won after a Samoan Drop on Bliss, then gave a good speech after the match about being a star and standing up to bullies. Good moment.

Orton couldn’t be less boring. And I’ve said that many times throughout his career. But, yet, he gets reactions wherever he goes, so there’s that. It was a good match. Hardy hit the Swanton Bomb off the top rope and pinned Orton to retain.

Funny-ish segment, but it was time-filler material with some comical relief mixed in.

Both Bryan and Cass have recently returned from injury, so pitting them against each other now was a curious move. And, as it looks now, it could be a multi-match program.

It was an okay match and Bryan sold well for Cass, and Cass sold well for Bryan. Bryan locked in the Yes Lock and did a good job of locking it in on Cass, forcing him to tap out. After the match, Cass attacked Bryan and left him laying in the ring, much to the disgust of Corey Graves on commentary.

Carmella may not be the best women’s wrestler on the roster, but I think we’re about to see a title reign that will grow into one of the better ones. I’d compare it to The Miz’s Intercontinental Championship run on SmackDown a year and a half ago where he was toiling away and became really, really good in the midst of his run. I feel the same way about Carmella.

This wasn’t a great match, but it didn’t need to be. There was one mistake Flair made, in attempting a moonsault, not connecting, and selling a knee injury because of it. Carmella being the savvy champion she now is, pinned her right away, retaining the championship.

I’m thinking we’ll see a longer run for Carmella before someone else other than Flair unseats her.

AJ Styles © vs. Shinsuke Nakamura for the WWE Championship ended in a double count-out

Lots of people angry about this not closing the show, but the ending pretty much showed why. While these two haven’t clicked in WWE, it may be a product of the entertainment aspect getting in the way of letting them just go out and tear the house down. We had a Nakamura heel turn that nobody saw coming at WrestleMania, then a bunch of low blow action on television, then both guys going for low blows in this match various times.

And that’s pretty much it. There’s no other heat. And the reason this match didn’t close the show was another open-ended finish that left room for another match. How many times can they put Nakamura in a title match before letting him win the gold? Will he ever win the gold? Let something happen! And I’m not talking about a double low-blow resulting in not being able to make the referee’s ten-count.

Strowman being the happy-go-lucky guy doesn’t do it for me. And Lashley is great, but being mired in this stuff upon his return to WWE isn’t helping him.

This match featured dissension between Owens and Zayn, so we’ll be getting that feud again [which isn’t a bad thing.] Lashley pinned Owens after his super suplex and both of them beat up Zayn after the match, too. Cool, I guess.

I’m not sure what else I can say about Reigns except that Vince McMahon needs to get him out of the top spot on Raw for a long time. Unless he’s willing to pull the trigger on a heel turn, I don’t see how keeping Reigns in the top spot is conducive to success moving forward for not only him, but WWE as a whole.

There was another, “This is boring!” chant during the match, which is the same thing that happened during WrestleMania’s main event. And there was one common denominator in all of that - Reigns. I am not against Reigns because I do think there’s money to be made with him, but it’s time for WWE to stop pushing him as the next John Cena. It’s just not there right now. The fans overall want to boo him, so turning him heel and having him feud with Rollins seems like the most logical way to move forward.

WWE’s not always been about logic, however. McMahon is going to do what McMahon wants to do, even if it means what the fans don’t want to see. While that’s a huge backward step in business, McMahon will be damned if people don’t want to see his hand-picked guy in the main event. It’s the way it was with Hogan when fans started turning on him, it was like that with Stone Cold Steve Austin - though, nobody really turned on him - and it was like that with Cena.

Now, Reigns vs. Joe wasn’t bad, it just didn’t click. Joe is trying to be the best heel in the business and is doing a great job, but the fans’ apathy toward Reigns is just not helping him. Hopefully this is done for a while and Joe can bounce back from this loss as if it never happened. Because a lot of people want to forget about it.

WWE’s been in a holding pattern since January. While the build to WrestleMania was fantastic, nothing happened there that’s really left a mark in terms of fans remembering weekly on television. That used to be a staple of growing up a fan of wrestling, but now it seems like WWE wants fans to forget what happens on television as soon as the program is over. Nothing is exciting, and they’ve managed to turn multiple feuds into chores to watch. That’s not what the biggest wrestling company in the world needs to be doing.

Yeah, ratings are ratings and fans will tune in to the WWE Network for their pay-per-views, but if the company is going by solely that and not what the criticism coming in is saying, then they need to take a good look in the mirror. It’s a boring product with boring characters, and in 2018, that shouldn’t be happening with the talent pool they have with which to play. It’s ridiculous and this pay-per-view was an example of that. A great opener followed by nothing but mediocrity at best.