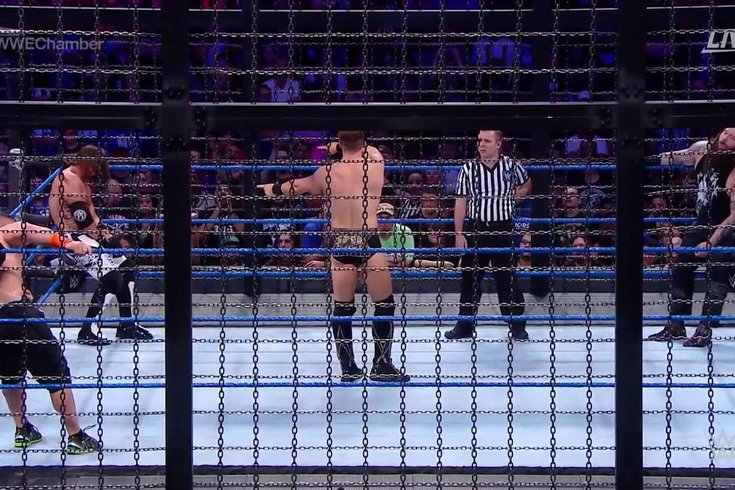 Six superstars had a chance to walk out of Phoenix as WWE Champion Sunday night. But who did?

SmackDown Live’s final brand-only pay-per-view before WrestleMania emanated from the Talking Stick Resort Arena in Phoenix, Ariz. on Sunday night. It was the return of the Elimination Chamber, which hadn’t been seen since May 2015.

The Elimination Chamber structure was new and improved, sporting a more square-like look and a padded platform outside the ring to allow for better protection for bumps. The pods were a little bit shorter, but that’d make it easier for high-risk maneuvers, which did come into play, of course.

John Cena, the 16-time World Champion, defended his championship against five of SmackDown’s best, which included the likes of AJ Styles, Dean Ambrose, Bray Wyatt, Baron Corbin and The Miz. Would Cena walk out of Phoenix with the gold?

Let’s take a look at what happened Sunday night:

I guess that’s all that needs to be said about that.

I was pretty pumped for this to start off the main card, but I this match left a lot to be desired due to who was involved. The ending was a little weird for me, given Lynch having a fluky rollup to pin James doesn’t seem to be the way she wanted to win heading into the match. She wanted to inflict a lot of pain to James, who cost her the SmackDown Women’s Championship. Hopefully, we’ll see a rematch or two in the near future, because these two could definitely have had the match of the night.

During Kalisto’s entrance, Ziggler attacked him from behind on the stage and threw him into the LED screen, causing him to miss most of the match. It was a one-on-one affair between Ziggler and Crews much of the match before Kalisto came limping down to the ring. Crews got the hot tag to Kalisto, who was either selling his injury to fake out Ziggler or just forgot that his back was supposed to be in excruciating pain.

After the match, Ziggler attacked Kalisto and Crews, and wound up “shattering” Crews’ ankle not once, but twice, by stomping a steel chair onto the prone wrestler.

The crowd loved it, which brings a few questions. Is Ziggler loved that much? He hasn’t been a great heel since his turn, and doing something like that shouldn’t result in the crowd chanting, “Thank you, Ziggler!” Of course, Crews has been grossly mismanaged on the main roster since the brand extension began in July, and there’s really no reason for the crowd to cheer for him at this point. However, the chants for Ziggler were a little much, even for me, given that Crews doesn’t deserve that kind of vitriol from the crowd.

This was a very entertaining match, but the ending didn’t seem to indicate the live crowd felt the same.

Unfortunately for the former first-ever SmackDown Tag Team Champions, The Usos eventually eliminated them, bringing out the current SmackDown Tag Team Champions. After a good back-and-forth mini-match between the two teams, American Alpha got the pin over The Usos, eliminating them. Jimmy and Jey proceeded to destroy Jordan and Gable after they were eliminated, leaving The Ascension to mop them up. But that didn’t happen.

There were a few near falls, but American Alpha finally eliminated The Ascension after hitting Grand Amplitude on Viktor to retain their tag team titles.

The crowd was flat at the end of the match and there was virtually no pop for Alpha’s big win. I thought the way the match was booked was fine, but it’s as if none of these tag teams are over enough with the crowd to get a loud ovation at all, regardless of the outcome. The Usos attacking Alpha was great in terms of the story, and it would have made sense for The Ascension to then win the titles due to that. But that didn’t happen, and I think a lot of people were kind of afraid it was going to happen. I was one of them. The tag team division needs a lot of work, but a title win for The Ascension on Sunday night would’ve been the wrong move.

• Nikki Bella vs. Natalya ended in a double count-out

This was a very good match, and I could definitely see a rematch coming soon on an upcoming episode of SmackDown Live. I’m not sure if WWE will take this feud to WrestleMania – I don’t think it should – but I don’t think I’d be against it. The crowd heavily booed the ending, which saw Bella and Natalya duking it out outside the ring, and Natalya preventing Bella from getting back into the ring as the referee counted to ten.

In a backstage segment later in the show, Bella accidentally knocked down Maryse during a scuffle with Natalya, who attacked her. Seeds planted for the rumored Bella/Cena vs. Maryse/Miz match at WrestleMania? Stay tuned.

The demise of the Wyatt Family happened rather quickly and began when the trio of Orton, Harper and Wyatt held the SmackDown Tag Team Championship gold after defeating Slater and Rhyno in December at the TLC pay-per-view. Since then, Orton and Harper haven’t seen eye to eye at all, and it seems as if Harper has left the Wyatt Family for good.

So, on Sunday night, the 2017 Royal Rumble winner and Harper had a chance to get all of their tension out as they took on each other in a one-on-one match. And what a match it was. For being a big guy – he’s listed as 6’5”, 275 lbs. on the WWE website – Harper is really agile and can move with the best of them. Think Undertaker in 1991, Kane when he debuted, and even Big Show during his early WCW days. Big guys aren’t supposed to move like that.

I’m not trying to completely compare Harper to some of the all-time greats, but he’s definitely got something special. Orton defeated Harper with an RKO after a great match, but I don’t think we’ve seen the last of Harper at all. In fact, it wouldn’t surprise me to see Harper in the SmackDown [or Raw] main event scene by the end of this calendar year. He’s that good.

As for Orton, the win keeps him strong heading into his title match at WrestleMania, and he continues to have really good matches. Is this sort of a receipt from WWE after they made Orton take those vicious elbows from Brock Lesnar at SummerSlam in August? Hmmm…

Having Naomi as champion heading into her hometown of Orlando for WrestleMania almost assumes bad things will happen and she’ll lose it just as quickly as she won it, but I’ll enjoy this surprise for now. Naomi definitely deserves it, as the crowd let her know and had her in tears after the match Sunday night.

.@NaomiWWE was a part of the original @WWENXT ... and now she's brought HER glow to the #SDLive Women's Championship. #WWEChamber pic.twitter.com/OpMStdWcpB

The debate on social media now – is Naomi ready? She’s been in WWE for years. She hasn’t had a chance to shine like she has in recent months. We’ll see if she’s ready. It’s way too early to tell right now. But, congratulations to Naomi and hopefully she gets a strong push with the title like Bliss had.

Wow. After almost four long years as the leader of the Wyatt Family, Bray Wyatt finally got a taste of WWE Championship gold on Sunday night. In what turned out to be a fantastic Elimination Chamber match, Wyatt pinned both Cena and Styles to become WWE Champion for the first time ever.

Cena and Styles started the match off, with Ambrose, Wyatt, Corbin and The Miz following in five-minute increments, respectively. Nobody was eliminated from the match until all four wrestlers were technically released from their pods, but Miz’s refusal to actually enter the match by leaving his pod resulted in the first elimination when Ambrose rolled up Corbin as The Lone Wolf waited for Miz.

After he was eliminated, Corbin attacked Ambrose by throwing him through a pod and then hit him with an End of Days. That allowed Miz – who would finally leave his pod – to eliminate Ambrose via pinfall.

Styles and Wyatt fought for a few minutes, and as Styles was going for the Phenomenal Forearm, Wyatt caught him in another Sister Abigail finisher to pin him and win his first WWE championship.

When Wyatt’s character debuted on the main roster in 2013, I thought he eventually would become a world champion at some point. However, after his feud with Cena ended with him losing and then eventually just becoming a joke, I didn’t think there was a chance he’d be in the World Title picture. So, I’m glad I got to witness it because Wyatt’s been one of WWE’s best characters since the brand extension.

Now, this sets up a Wyatt-Orton showdown for the championship at WrestleMania. It’s interesting that WWE has decided to involve the title in this feud and eventual breakup of the Wyatt Family. If Orton were to win the championship at WrestleMania, however, it would mean the title had switched hands three times in just over two months. Some will frown upon that, but I’m interested and it’s been a while since WWE’s had an interesting angle like this. What was originally thought as a throwaway angle with Orton clearly turning on the Wyatts after joining them has turned into one of WWE’s best storylines the last few months. How WWE builds Orton-Wyatt as we inch closer to WrestleMania will be really compelling to see. How does Harper fit into all of this? Will he begin a feud with another party? Stay tuned.

As for Cena, it looks like he’ll eventually break Ric Flair’s record of 16 world titles, and when he does, it’ll be something special. Given how Bella’s interaction with Maryse backstage unfolded and the fact that Cena eliminated Miz from the main event, it definitely looks like we’re in store for a mixed tag match at WrestleMania. Better get ready for it.