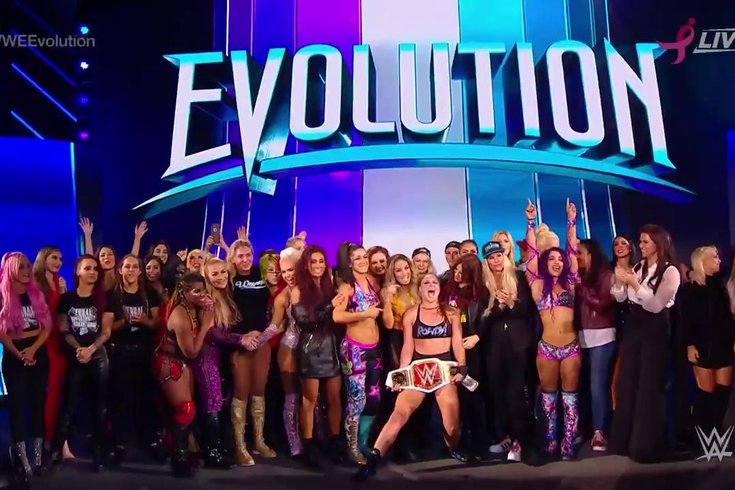 On Sunday night, the Nassau Veterans Memorial Coliseum was the epicenter for WWE’s female roster as the first-ever women’s pay-per-view for the company took place in Uniondale, New York. Ronda Rousey was the headliner, defending her RAW Women’s Championship against Nikki Bella, but the SmackDown Women’s Championship match would steal the show.

We had Hall of Famers get back in the ring for the first time in years, some women that were at the forefront of the Divas Division a decade ago, and the current crop of female superstars to really make this event special and signify a true landmark event. I don’t think it’ll be the last all-women’s pay-per-view we see in WWE. The event shattered all of my expectations, and we’ll get to that shortly.

The show kicked off with an unexpected musical performance by Lzzy Hale with Nita Strauss on the guitar, and it was pretty awesome.

Alexa Bliss was originally scheduled to team up with James, but a concussion forced her to miss the match and Fox was her replacement. Despite her injury, Bliss was still at ringside for the match.

Lita got the biggest pop from the Uniondale crowd and they were hot from the start. But the crowd really got going when James was tagged into the match to go one-on-one with Stratus. The callback to their epic feud over a decade ago was pronounced, and the two went at it like they were still sworn enemies.

It was a very good match despite a botch by Fox to break up a pin where the referee stopped counting, and Stratus hit James with the kick to the head to get the pin.

It wouldn’t be a WWE pay-per-view without a battle royal! And this one made sense because it set up a future match or feud. It was a good way to get as many women on the show as possible, too.

Royce and Kay did their usual spiel on the mic as they were walking down the aisle and were promptly thrown over the top rope and eliminated. Soon after, it became the past vs. present as the names of yesteryear were surrounded by the current crop of superstars. Then all hell broke loose.

In a somewhat surprising move, Mandy Rose eliminated her teammate Sonya Deville. I have to wonder if that’ll start an eventual feud between the two or if it was just an angle to play off in the battle royal. Stay tuned.

Ivory and Carmella had a dance break mid-match. Pulled out all the stops in this one. In a callback to their epic feud in NXT, Ember Moon and Asuka went at it for a bit. For the revenge factor, Moon eliminated Asuka this time around.

Nia Jax would send out Ember Moon to win the battle royal and get that championship opportunity on the RAW brand in the future.

I went with Shirai in this one, but Storm wound up winning in a really good match. Storm seemed more over with the crowd, and it took a bit for the crowd to get really into the match the way they were the previous matches. These two also don’t get on television weekly, so I considered that as a reason why the crowd wasn’t as into this match.

Shirai kicked out of Storm’s finisher once, but once Storm hit the Storm Zero a second time, that was all she wrote. Storm is your 2018 Mae Young Classic winner.

This may have been the best six-woman match to put together on this card with the talent in the ring. This was also a really good match, and there were plenty of good spots and near falls to make the crowd hot. It was classic heels taking control for the majority of the match, but the ending sequence was great.

Bayley hit the flying elbow from the top rope onto Morgan, followed by a frogsplash by Banks to cement the victory.

The way Baszler targets the arms of her opponents every match is still a sight to behold. Some of the moves she performs honestly look as real as it gets in professional wrestling. I don’t know how Sane didn’t have a dislocated elbow, shoulder, fingers, etc.

After a back-and-forth affair, the duo went to the outside where Sane back bodydropped Baszler into her Four Horsewomen friends in the front row, Jessamyn Duke and Marina Shafir. Both Duke and Shafir would get involved outside the ring, with Sane getting a kick to the head and falling back in Baszler’s rear naked choke hold, eventually passing out and giving Baszler the championship once again.

This probably should’ve been the main event given the storyline and how good the build has been, but when the company has Ronda Rousey, she’s the headliner.

And this is probably the match most of the hardcore wrestling fans were looking forward to on this card. The animosity between two former best friends has played out well on television week after week, and we could actually believe these two women hated each other’s guts. Despite WWE still pitting Flair as the babyface and Lynch as the heel, Lynch was still more popular with the live crowd Sunday night – as she has been ever since her turn – than Flair.

This one had pretty much everything. The story told through the match was absolutely on point the entire time. It instantly became a Match of the Year candidate, and will remain a classic forever.

Yes, we had table, ladders and chairs, as well. In one spot, Flair tried a moonsault onto Lynch through the table inside the ring, but the table didn’t break. However, instead of moving on, they audibled into Flair doing a somersault senton through Lynch and the table, breaking it clean in half on the second try.

The ladder came into play when Lynch bodyslammed Flair onto it for an epic delayed reaction, much like her father did in his heyday. Flair would eventually lock Lynch’s legs through the ladder and apply the Figure Eight, which made Lynch tap. Only, that wasn’t the way to win this particular match.

Outside the ring, Lynch would ascend a ladder and legdrop Flair through the announce table and bury her in a sea of chairs. Referee Mike Chioda counted to nine-and-a-half before stopping his count, even though it was pretty clear Flair’s knee was still on the ground. Shenanigans?

Flair would set up Lynch on another table outside of the ring, and started ascending the turnbuckle as if she was going to try a moonsault off the top rope through Lynch and the table on the outside. Just imagine if that were to actually take place.

Lynch countered and powerbombed Flair through the table, and that was the end of it. Flair couldn’t reach her feet before the ten count, and Lynch retained the SmackDown Women’s Championship in one of the best matches of the year. An absolute classic.

This was Rousey’s first chance to headline a WWE pay-per-view as the last match main event, and there really was no better name value to pit against her for this moment, in this moment, than Nikki Bella. The way WWE booked the storyline to get to this match wasn’t the best – certainly not the way Lynch/Flair was built – but it was clearly good vs. bad with Nikki turning on her friend, becoming the clear bad girl jealous of her friend’s accomplishments.

Of course, Brie would get involved, but Rousey took care of her outside the ring, and then ran right into a perfect Alabama Slam by Nikki. She hit the Rack Attack 2.0 but Rousey kicked out at 2.9.

Nikki was going to go for a high-risk maneuver, but Rousey raced up to the top rope, flipped Bella to the mat pretty hard, locked in the armbar and got the victory to cement the first-ever all-women’s WWE pay-per-view.

·  One of the best WWE pay-per-views of the year, if not the best. The matches were good to great, and Rousey showed she could headline and perform a great match. Nikki is a veteran, so that certainly helped, but Rousey’s likely going to be called on to headline pay-per-views again, and this was a very strong first showing for her.

·  Flair and Lynch’s classic match will be hard to top. I’m not sure what other type of match they could have that’s not Hell in a Cell. I hope this isn’t the end of the feud, but a Last Woman Standing Match should signify that it’s over.

·  Baszler recapturing the NXT Women’s Championship could mean she’s not coming to the main roster any time soon. And that’s okay, she’s been killing it in NXT for a while now. Maybe a rush to the main roster isn’t necessary. But that was one of the major surprises of the night for me.

·  Nia Jax is now going to eventually challenge for Rousey’s championship unless she switches brands, which could happen. We’ve seen it happen before. But I’d definitely be all-in for a Rousey vs. Jax match again since their match at June’s Money in the Bank pay-per-view ended with a Bliss cash-in.w