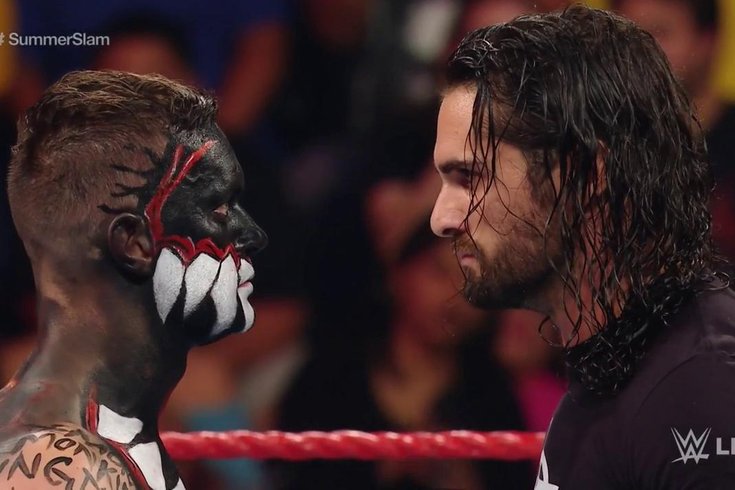 It was the go-home to SummerSlam edition of Raw in Corpus Christi, Texas on Monday night, and the electricity felt in the arena might have been slightly caused by the electricity on the outside of the building.

A lightning bolt reportedly struck the American Bank Center Monday afternoon taking out all of the arena’s power, but all was well and good when 8:00 p.m. hit for Raw to take the airwaves. And it would be a very important episode heading into the biggest event of the summer.

Stay tuned for the Notebook. Some very exciting news there.

Much was made about Finn Bálor’s debut of the Demon King character on Raw Monday night. I think a lot of it was nonsense, and I’ll explain why.

Seth Rollins said he was going to call out the Demon King all week long, so when he came out to the ring and ran down Bálor and said he was terrified of the face of his failure. It was then that a fan tried to get into the ring and approach Rollins. Security got to him after Rollins gave him a shove. Both Rollins and Michael Cole on commentary played it off pretty well for the scary real moment it likely was.

A fan in attendance, José Silguero, gave us permission to use his video of what occurred when the fan was tackled by security, in which television cameras were smoothly able to avoid.

This random dude jumped in the ring and tried to fight @WWERollins ! 😂👊🏼 pic.twitter.com/3woF2rSqEq

As you can see, the Demon King’s entrance began as the fan was being apprehended by security. Slowly but surely, Bálor made his way down to the ring as the WWE television audience got its first glimpse of the Demon King on the main roster.

This was a point of contention for many wrestling fans on Twitter. Some thought WWE should have saved the Demon King debut for SummerSlam because we’re conditioned to believe really big events should be left for the monthly events that used to be referred to as pay-per-views.

But that’s no more. With the advent of the WWE Network, subscription amounts are all the company cares about. And if people are going to decide to subscribe or unsubscribe to the WWE Network based on the debut of the Demon King on WWE’s main roster happening on Raw instead of SummerSlam, then they probably should just stop watching wrestling altogether.

Here’s where I stand: It’s not a big deal that WWE decided to debut the Demon King on the main roster before Sunday’s SummerSlam event. It’s 2016, and the days of WWE banking highly on pay-per-views due to buy rates are gone. The Demon King was not a selling point for SummerSlam. People are not going to not watch SummerSlam because the Demon King was “unveiled” on Monday night.

I get the idea, though. Save something for what’s supposed to be the biggest event of the summer. If I was booking Raw, I probably wouldn’t have had Bálor and Rollins get involved physically, and instead just have had an intense staredown. That would have been perfect.

But I guarantee you this – when Bálor and Rollins are battling for the WWE Universal Championship on Sunday, nobody is going to say, “Man, I really wish they didn’t debut the Demon King on Raw last Monday.”

Additionally, the Demon King’s debut made for a pretty awesome moment on Raw. Why complain about that? It would have been the same thing at SummerSlam, just like we saw on previous NXT TakeOver specials. And I think it was imperative to introduce the Demon King to the casual audience who may have not had any idea what kind of character it was before Bálor debuted on the main roster. Now, everyone knows who the Demon King is, not just a select few.

The United States Champion opened the program with reckless abandon and demanded Roman Reigns apologize for last Monday’s hijacking of his wedding celebration ceremony with Lana, complete with cake and everything. Raw general manager Mick Foley came out and Rusev told him he lied when he referred to him as the best general manager in all of “mankind.”

Raw commissioner Stephanie McMahon also came out, but Rusev was adamant about receiving an apology before even thinking about leaving. He even threatened to leave Raw and head to Shane McMahon’s and Daniel Bryan’s SmackDown Live.

Reigns’ music hit and he made his entrance. Reigns would eventually apologize – for Rusev meeting his wife on a website and how Rusev and Lana were going to “make the ugliest Sasquatch babies.” That’s not PG, man.

Foley would make a non-title match between the two for the main event, just six days before their tilt for the United States Championship at SummerSlam.

The main event was given plenty of time, and it was the second straight week Rusev was featured in the last segment of the show. He’s bounced back from a few poor angles in 2015 to become my “Comeback Superstar of the Year,” if you will. Rusev even kicked out of Reigns’ lethal Superman punch, so WWE seems to be back on the right track with the U.S. Champion.

Rusev clamped The Accolade on Reigns twice, and I thought he would come out the victor just so we could see Reigns victorious on Sunday and become the new United States Champion. That wasn’t the case.

Reigns broke out of The Accolade and was able to hit Rusev with the spear and notch the victory. I was surprised because I thought Reigns would win the title at SummerSlam, but when it comes to WWE’s 50/50 booking, it sure looks like Rusev will retain the U.S. Title on Sunday.

While everything is subject to change and that might not happen, I don’t think Rusev’s ready to lose the title just yet. He’s still recovering from a terrible 2015, but he’s not fully there yet. He needs a few more months of doing what he’s been doing and I think he’ll become a major player in the main event scene on Raw.

The Beast Incarnate returned to Raw with Paul Heyman set to do his talking, but when Heath Slater came out before Heyman could get any words of substance out, the duo was none too happy. As it turns out, Slater wasn’t there to fight, he was there for Heyman’s help.

Slater referred to the two as “Mr. Heyman” and “Mr. Beast” and let them know he was the hottest free agent in wrestling. He was given another opportunity for a Raw contract, and all he had to do was beat Lesnar.

Slater said he wanted to do good for his two daughters and however many other kids he has at home. Lesnar’s response? “I don’t give a s--- about your kids.”

Savage. Lesnar hit Slater with an F-5 and dispatched of him as Heyman continued with what he was going to say before he was interrupted. He pretty much hyped the Lesnar-Orton match all by himself, as Lesnar and Orton had already done their part in previous weeks. I’m actually looking forward to this match now.

After Charlotte made quick work of Alicia Fox, she challenged WWE Women’s Champion Sasha Banks to come down to the ring from the commentary table. The Boss obliged, but was attacked from behind by Dana Brooke, who was given a stern lecture by the former women’s champion before the match.

Thanks to the attack, Charlotte was able to injure Banks’ knee and lock her in the Figure-Eight, damaging her knee heading into SummerSlam. It was subtle storytelling we don’t see much of anymore, and it was awesome to see.

Joining @ShootersRadio on Friday at 5pm ET will be none other than @JRsBBQ! We'll talk #SummerSlam and a lot more! pic.twitter.com/dosVWWIVeT

• Tune in to Episode 55 of The Straight Shooters wrestling podcast this Friday at 5 p.m., as WWE Hall of Famer Jim Ross joins the program! We’ll be previewing SummerSlam, talking more about the WWE brand split and what to expect heading into the fall season, and I might just ask him why Oklahoma Sooner alumnus Lane Johnson is hell bent on ruining the Eagles season. Tune in at catchwildfire.com on Friday at 5 P.M. as Ross joins us for the entire hour!

• Due to Cesaro distracting Sheamus in his match with Sami Zayn, and possibly costing him a victory, Foley put Sheamus and Cesaro in a Best-of-Seven series, which is set to begin with a singles match at SummerSlam.

• A short-lived reunion of the Prime Time Players took place on Monday night, but Titus O’Neil wound up turning on Darren Young, much to the chagrin of Young’s life coach, Bob Backlund.

• It looks like the Dudley Boyz will be broken up soon, as the last two weeks have seen D-Von hit Bubba Ray with an inadvertent clothesline, leading to a loss.

• John Stewart will be appearing at SummerSlam in Brooklyn for a second year in a row. If you’ll remember last year, Stewart turned on John Cena, allowing Rollins to beat him for the United States Championship.

• The Shining Stars d. Prime Time Players w/ Bob Backlund by pinfall when Titus O’Neil hit Darren Young with the Clash of the Titus after Young accidentally knocked O’Neil off the apron.

• Neville d. Jinder Mahal by pinfall via the Red Arrow.

• Luke Gallows/Karl Anderson d. Golden Truth by pinfall via the Magic Killer. Xavier Woods and Kofi Kingston came out and attacked Gallows/Anderson before they retreated.