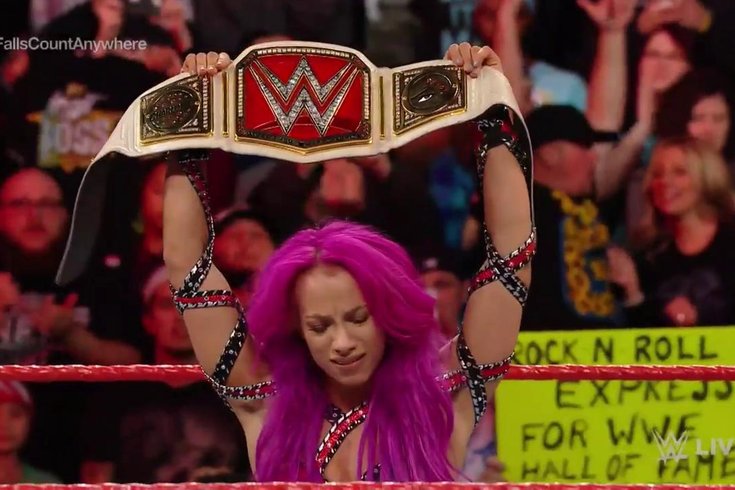 The path to Roadblock: End of the Line was in full swing on Monday night for WWE’s red brand. With SmackDown’s TLC pay-per-view coming up this Sunday [I’ll have a preview here later this week for that], Raw was looking to make some waves and finally put on a quality show that the brand has been lacking for months.

And they did just that.

The Spectrum Center in Charlotte, N.C. was the site as Sasha Banks and Charlotte Flair battled for the Raw Women’s Championship not once, but twice. Roman Reigns set his eyes on the WWE Universal Championship and got his shot at a chance at the title down the road. Would he make the most if it? And The New Day defended the Raw Tag Team Championships a few weeks ahead of the record-breaking mark they could reach and become the longest-reigning WWE Tag Team Champions in history. Were they able to fend off Gallows and Anderson? Let’s find out.

Chris Jericho began the program with an edition of The Highlight Reel, with his biggest guest ever (!), his best friend and reigning WWE Universal Champion, Kevin Owens. Both Jericho and Owens ran down America’s Thanksgiving fallacies since they’re both Canadian.

The WWE United States Champion came out and ran down Owens and Jericho, who started to tease a little dissension of their own, once again. Last Monday, they teased a breakup after their Survivor Series tension caused by Owens using The List to hit an opponent and get himself disqualified. Monday night, they teased a breakup once again. Owens said he didn’t need Jericho to interfere on behalf of him in his matches, and Jericho took that personally and decided to leave the building after fighting with Owens a little more backstage.

Reigns wanted a title shot at Owens’ Universal Championship, and the match was on. If Reigns could defeat Owens in a non-title match, he’d get an opportunity to fight for the championship at the next Raw pay-per-view, Roadblock: End of the Line, on December 18.

Reigns wound up defeating Owens in a very good match via the spear. Owens was distraught backstage after the match, worrying about Jericho. You see, Jericho was attacked by Seth Rollins as he was trying to leave the building earlier in the program. Rollins wound up hitting The Pedigree on Jericho on top of a car.

Owens clearly wasn’t fully into the match against Reigns. Or so, that’s what they want you to believe.

Reigns will now face Owens at Roadblock: End of the Line for the WWE Universal Championship.

Banks was looking to become the three-time Raw Women’s Champion on Monday night in Flair’s hometown of Charlotte. The match began with some good spots, the usual chopping fests, but ended prematurely when both women were counted out of the ring.

But that didn’t stop the general manager from quickly coming up with a new plan. Foley didn’t want the match and feud to end that way, so he gave Banks and Flair a breather and said they’d meet later on in the program in a No Disqualification, No Countout, Falls Count Anywhere match.

And that match was the main event. That makes three main events for Banks and Flair on WWE shows since July.

And what a match it was. It may have been the best match in the entire series since both women joined the main roster. The fight spilled into the aisle and near the announce table by the entrance ramp where Flair hit a moonsault off of the table onto Banks on the ground. But that didn’t end the match.

Eventually, the two would brawl up the stairs. Banks got Flair in between the railings between sections and pulled back, locking in a modified Bank Statement. Flair tapped out and Banks became a three-time Raw Women’s Champion.

Before the match, Banks declared that she was dedicating the match to Flair’s father, Ric. Well, he came out as Banks was celebrating in the ring with the title and raised her hand in victory.

Michael Cole say down with Paul Heyman for the first reaction to what occurred at Survivor Series when Goldberg completely demolished Brock Lesnar, “breaking” his ribs in the process of his two spears. Heyman said Goldberg’s win over Lesnar was so embarrassing that it gave Lesnar something that he has to prove. And that scares him, for whatever reason. He said he doesn’t think we’ve ever seen that side of Lesnar before.

Can’t wait for those fireworks.

The New Day defend the gold in hopes of attaining history

Luke Gallows and Karl Anderson were trying to end the historic reign of The New Day on Monday night as they vied for the Raw Tag Team Championships. It was an okay match, but Xavier Woods pulled a fast one on Anderson and rolled him up and held his tights for the victory as the referee didn’t see it.

A heel move? Sure. But everyone loves The New Day. So we’ll just ignore that for now.

Braun Strowman continues to evolve each week on Raw and is becoming better and better. After his match with R-Truth to open the show, Sami Zayn attacked him. Strowman demolished Zayn last Monday night and the general manager had to stop the match. Zayn was trying to exact some revenge, but Strowman turned the tables quickly and didn’t let it happen.

Foley came out and he and Zayn had a heated confrontation. Foley said Zayn couldn’t defeat Strowman and he had no business being in the ring with him. His match last week against him was punishment for not winning the WWE Intercontinental Championship at Survivor Series, according to Foley. Foley was so furious in this promo that his bottom teeth fell out.

That was a great promo by both involved and hopefully will give Zayn some new life on the Raw brand.

• Braun Strowman d. R-Truth by pinfall via a running powerslam. Sami Zayn attacked Strowman after the match, but Strowman got the better of him.

• Falls Count Anywhere match for the Raw Women’s Championship: Sasha Banks d. Charlotte Flair © by submission after getting her to submit to the Bank Statement on the stairs in the audience.