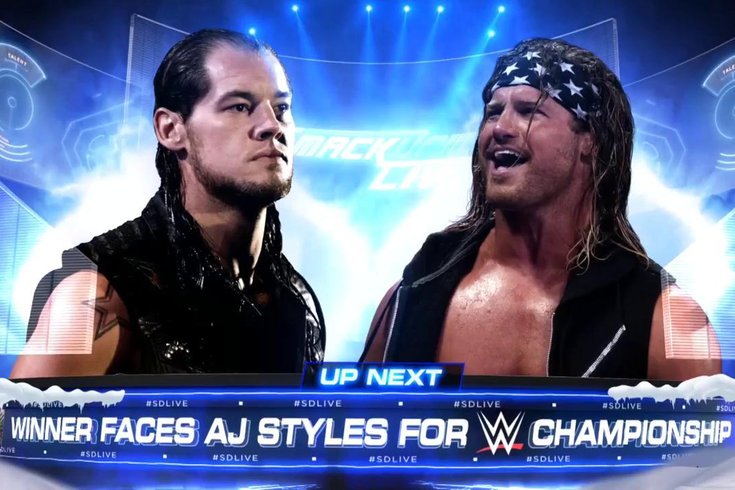 Baron Corbin had a chance to become No. 1 contender to the WWE Championship Tuesday night.

On Tuesday night, it was SmackDown’s turn for some holiday beatings as the blue brand invaded the Joe Louis Arena in Detroit for the second-to-last episode of 2016.

Before January’s Royal Rumble pay-per-view, SmackDown’s looking to have one last big bash in 2016, completely loading up next Tuesday’s show with a bunch of title matches. But it’s how we got there that matters. And we got there from some of the events that transpired in Detroit Tuesday night.

Let’s take a look at what happened:

James Ellsworth didn’t have to wait three weeks to get his shot at AJ Styles’ WWE Championship, because the match kicked off SmackDown right away on Tuesday night. And it barely lasted more than the opening montage.

Styles completely crushed Ellsworth, knocking him out with a combination of punches, slaps, and then finally a ferocious elbow to the face. He easily pinned his challenger, but he wasn’t done there. After three fluky wins in a row against him, Styles wanted to make sure Ellsworth never wrestled again. Or, at the very least, injured him enough to put him on the shelf for a while.

And that’s exactly what he did. He took him on the outside of the ring, threw him into the announce table, into the steel steps and then finally catapulted the hapless Ellsworth into the metal holding the ring up.

Styles took the mic and said 2017 was going to be his year now that 2016 was over, but his No. 1 contender in Dolph Ziggler interrupted to remind him they will face each other next Tuesday on SmackDown in a title match. Baron Corbin came out and said the only reason Ziggler’s in line for a title shot was because Corbin himself wasn’t at SmackDown last week, so he wasn’t in the No. 1 contender’s match - or else he would have won it. Corbin punched Ziggler and as Ziggler tried fighting back, Corbin hit him with End of Days and left him laying in the ring.

The two would face off in the night’s main event, with Daniel Bryan agreeing to Ziggler wanting to face Corbin, but his No. 1 contendership would be on the line.

Could Ziggler keep his No. 1 contendership?

Ziggler and Corbin had a good match together, and it was cool seeing Corbin finally being put in a prominent position on the show. When the match spilled to the outside, Corbin kept throwing Ziggler into the barricade, steps, and then eventually Styles, who was at ringside on commentary. Ziggler recovered and nailed Corbin with a superkick, but by that point, the ten count had been enacted. The match was declared a double countout.

Styles attacked both Ziggler and Corbin with a steel chair afterward, but the general manager came out and made next Tuesday’s WWE Championship match a Triple Threat Match and added Corbin to the mix. Things just got really interesting.

Apollo Crews gets another shot at Intercontinental gold

Apollo Crews rolled up The Miz for the pin last Wednesday night on WWE’s Tribute to the Troops special, so the champion wanted a rematch against him on SmackDown. The WWE Intercontinental Championship was on the line as Crews looked impressive in the beginning of the match, before that terrible commercial break took place in the middle of the match, just like it always does.

After the break, the two continued to battle in a fairly good match. However, Maryse got a little too involved, and the referee banished her from ringside, which caused a close call with Crews rolling up the champion for the two count.

However, Miz was able to retain his championship after putting his thumb in Crews’ eye with the referee not looking, allowing him to capitalize with the Skull Crushing Finale.

After the match, Renee Young got in the ring and mentioned how Miz’s obsession with Dean Ambrose during last Tuesday’s Fatal Four Way maybe got in the way of his chance at winning the No. 1 contendership that Ziggler eventually won. Miz turned the tables and wanted to talk about Young’s obsession with Ambrose, seeing as how they both are dating in real life.

Except Miz didn’t use such nice words. He was met with a swift slap, and then Young left the ring.

The Wyatts take out Ambrose

Speaking of Ambrose, he had a one-on-one contest with the Wyatt Family’s Luke Harper, pinning him with a cradle after Harper countered a Dirty Deeds attempt. Predictably, Randy Orton and Bray Wyatt rushed into the ring quickly after the three count and destroyed Ambrose.

As Ambrose tried getting to his feet, The Miz came out and nailed him with the Skull Crushing Finale.

Becky Lynch gets in the head of Alexa Bliss

One week ahead of her defense of the SmackDown Women’s Championship, Alexa Bliss got back in the ring after it was revealed she faked her knee injury last Tuesday. Big surprise, I know. She took on the masked La Luchadora, and I’m sure everyone watching knew what was next.

La Luchadora locked in the Dis-Armer and made Bliss tap out. She revealed herself as Lynch, much to the surprise of nobody except the ones on television who had to act surprised.

Natalya wanted to clear the air once and for all with Nikki Bella, but Carmella wasn’t far behind.

Carmella said Natalya cried on her shoulder when Bella returned from her neck surgery, saying she was given all the attention. Natalya called Carmella a, “dirty , little Staten Island snitch.” Natalya attacked Carmella

She admitted to attacking Bella at Survivor Series, basically listing all the stuff Bella’s been given the last few years. I’m guessing the storyline is that Natalya was jealous of her the whole time. Natalya ended with a pipe bomb of her own, saying Bella is nothing and that’s why John Cena will never marry her. Ah, a play on the whole Total Divas storyline. Clever.

Later, Carmella tended to a severely injured Ellsworth backstage. Have we seen a new duo take shape before our eyes?

Next Tuesday’s episode of SmackDown is being billed as the Wild Card Finals, and will boast an impressive lineup. Styles vs. Ziggler vs. Corbin for the WWE Championship, a Four Corners Elimination Match for the SmackDown Tag Team Championship featuring Orton/Wyatt, American Alpha, The Usos and Heath Slater/Rhyno. Becky Lynch will try to win back the SmackDown Women’s Championship as she faces Alexa Bliss. Cena will also be returning to SmackDown, as well.

It’ll be a big show next Tuesday night in Chicago.

• WWE Championship: AJ Styles © d. James Ellsworth by pinfall after a straight elbow to the face.

• Mojo Rawley d. Curt Hawkins by pinfall after nailing him with a running elbow to the face in the corner.

• Dolph Ziggler vs. Baron Corbin ended in a double countout. Styles was at ringside on commentary.

• Ariya Daivari d. Lince Dorado by pinfall via a frogsplash. After the match, Daivari called out the fans and Jack Gallagher, calling Gallagher a scoundrel.

• Cedric Alexander w/ Alicia Fox d. Drew Gulak by pinfall via the Lumbar Check. During the match, Alexander inadvertently ran into Fox, causing her to injure her ankle. Noam Dar came out and carried Fox backstage.