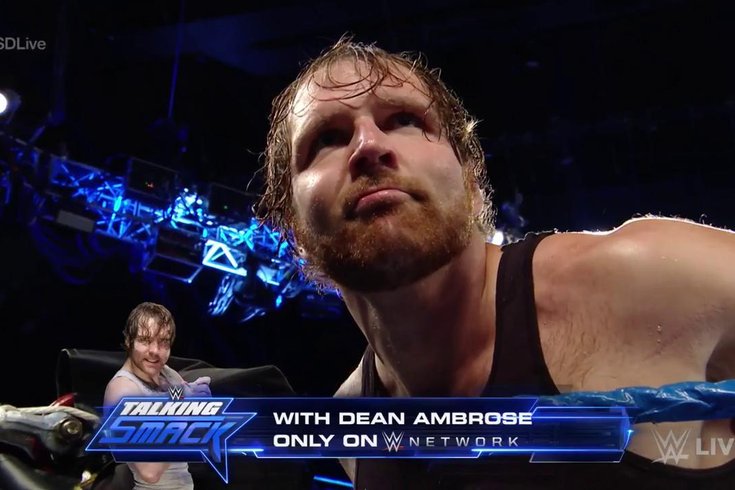 The Legacy Arena in Birmingham, Ala. was the host for SmackDown Live on Tuesday night. Dean Ambrose and John Cena met in the main event ahead of their participation in the No Mercy main event in October for AJ Styles’ WWE World Championship. But there was another big announcement waiting in the wings after the main event was finished.

We also saw another squash by Baron Corbin on Apollo Crews. What’s going on with Crews?

And The Usos prevented American Alpha from exacting revenge on them after their dastardly attack a few weeks ago.

The two challengers for the WWE World Championship at No Mercy faced off in SmackDown’s main event on Tuesday night. It was a good television match and I was just surprised to see Cena in action.

It was a back-and-forth encounter where the finisher, to me, in WWE became completely dead. Ambrose kicked out of the AttitudeAdjustment (I know, that finisher has been dead for a long time now) and Cena kicked out of Dirty Deeds.

And you know what won the match? A sunset rollup from Ambrose on Cena after countering an Attitude Adjustment attempt. Weird ending, but a good match and as long as you don’t believe in finishers in professional wrestling anymore.

After the match, AJ Styles hit Cena with the Phenomenal Forearm from the crowd. The general manager came out and announced Ambrose would be getting his rematch against Styles for the WWE World Championship, but he wouldn’t have to wait until No Mercy in October.

Nope. Next Tuesday night, Styles will defend his title against Ambrose in the main event of SmackDown Live. Now that’s going to be a television main event worth watching. Again. SmackDown’s on fire right now.

Becky Lynch and Alexa Bliss faced off as the program began to build towards their SmackDown Women’s Championship match at No Mercy in October.

Bliss said that Lynch didn’t fit the role of the champion; she wasn’t born to be a champion, she was born to be a loser.

And Lynch agreed. She said she wasn’t born to be a champion; she was born to live in a small house, born to work a job she didn’t like and barely make ends meet. But she fought to be a champion. She poured her heart and soul into being the champion, and she put way more into capturing the title than Bliss ever did.

Bliss said Lynch was destined to be in second place and a one-hit wonder before hitting her with the portfolio that was holding the contract and then dumping the table onto her. Lynch recovered, attacked Bliss on the entrance ramp, and then revisited the ring to sign her name on the dotted line.

That was a good way to begin the build to the Women’s Championship match at the next SmackDown pay-per-view.

The Miz begrudgingly defends his championship

I guess WWE’s Intercontinental Champion wants to stay on the SmackDown brand after all. At least for now.

General manager Daniel Bryan booked Miz to defend his title against Dolph Ziggler on Tuesday night, much to the chagrin of the Hollywood A-Lister. Miz wanted the match canceled, and Bryan said he’d oblige him, but then he’d also cancel his contract.

Miz decided against that choice and defended his title against Ziggler in yet another fantastic match between the two. For all the grief I’ve given Miz over the last few years, especially earlier this year, he’s really come on strong the last few weeks and it all can be traced back to when Maryse re-emerged on the scene. Since then, his character has taken off.

Which is why it’s no surprise he retained his championship on Tuesday night. Maryse was caught by the ref ready to spray something into Ziggler’s eyes … again … and the ref sent her to the back. The Miz was able to grab that spray while down on the ground outside the ring and spray Ziggler when the ref wasn’t looking, hitting the Skull Crushing Finale for the win.

Hopefully, this leads to something worthwhile for Ziggler, because he and Apollo Crews might be the biggest losers on the blue brand since the brand extension.

Chad Gable and Jason Jordan made their return to the ring as a tag team a few weeks after Jimmy and Jey Uso put Gable out of action with a knee injury. In what could have been built as a grudge match between the two teams – possibly for the SmackDown Tag Team Championships – in the future went entirely out the window during this throwaway match on SmackDown.

Gable and Jordan were defeated in quick fashion by Jimmy and Jey as the Usos head to No Mercy to take on Heath Slater and Rhyno once again for the SmackDown Tag Team Championship. American Alpha and the Usos are set to collide once again, but will it be for tag team title gold? Or should I say silver?

The Usos and American Alpha could be one of the better tag team feuds we’ve seen in recent memory. And maybe it’s just starting out. But eventually, we’re going to need longer, better matches between the two teams.

I like to follow the story, and clearly, the story was the Usos taking out Gable’s knee again. So, in terms of the storyline, Tuesday night’s match made sense. But keeping Jordan and Gable from showcasing their abilities each week could be worrisome if they continue this trend.

Why the outlook for Apollo Crews doesn’t look good

Some call it the growing pains that superstars have to deal with when they’re called up to the main roster. Some think Apollo Crews is “gaining his stripes” on the main roster before being given a substantial push.

But after Crews has lost match after match after match, it could be doing irreparable damage to him in the long run. Compare that to what Ziggler is going through now – nobody is behind Ziggler. He’s lost big match after big match throughout the years, and while he’s a great performer, nobody expects him to

That’s not a good thing. And that’s quickly becoming the outlook I have for Crews if the creative team on SmackDown keeps feeding him to Baron Corbin on a weekly basis. When SmackDown emanated from the Wells Fargo Center in Philly last Tuesday, Crews was an afterthought when Corbin attacked him on the outside of the ring and Jack Swagger came out to confront the Lone Wolf.

Crews is immensely talented. He definitely still needs to hone his craft inside a WWE ring using the WWE style. But having him look this bad this many times is only a hindrance to him. They need to correct it. He’s not an enhancement talent.

• No. 1 Contender’s Match: The Usos d. American Alpha by pinfall after J. Uso hit a splash off the top rope onto Jason Jordan.

• Baron Corbin d. Apollo Crews by pinfall via the End of Days.

• Randy Orton d. Erick Rowan by pinfall via the RKO.

• Nikki Bella/Naomi d. Natalya/Carmella by disqualification after Carmella grabbed Nikki while Natalya had the Sharpshooter locked on and attacked her on the outside of the ring.