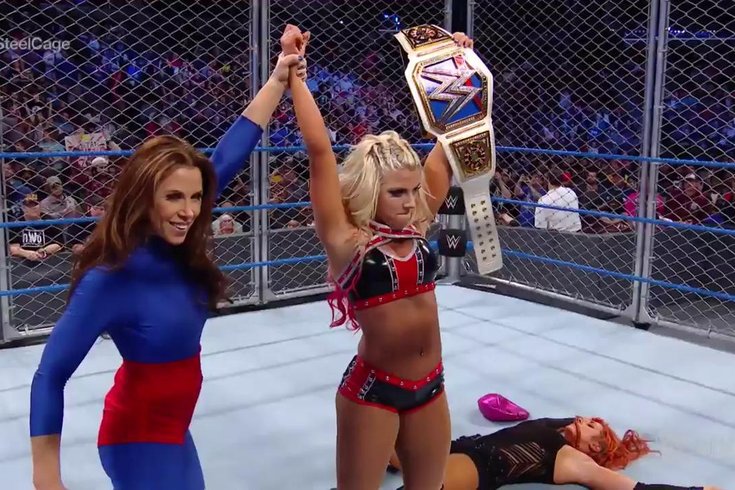 Alexa Bliss and Becky Lynch main-evented SmackDown on Tuesday night inside a steel cage, but a huge return stole the story.

The FedEx Forum in Memphis, Tenn. was the site of SmackDown on Tuesday night. The show was highlighted by a Steel Cage match for the SmackDown Women’s Championship, the return of the King’s Court, and perhaps the ascension of The Miz back into the main event scene.

The women of SmackDown got their chance to shine in the main event in Memphis, as Becky Lynch looked to regain her SmackDown Women’s Championship from current champion, Alexa Bliss, inside a steel cage.

The cage was supposed to prevent outside interference from someone that calls herself La Luchadora. And for most of the match, it did. Bliss and Lynch had a pretty good match inside the cage, and the fact that it was the main event was pretty awesome. Lynch looked like she had the title won twice before La Luchadora came down to the ring and stood in front of the cage door to prevent her from escaping.

Lynch, however, locked in The Disarm-Her to Bliss, who was about to tap out before La Luchadora came in and kicked Lynch right in the face. Bliss would capitalize and hit a DDT on Lynch to pick up the victory.

After the match, La Luchadora and Bliss continued to attack Lynch, but the Irish Lasskicker wouldn’t go quietly. She ripped the mask off Luchadora, revealing Mickie James. Welcome back, Mickie! Bliss attacked Lynch from behind and she and James stood tall to end the show.

SmackDown’s commissioner, Shane McMahon, opened the program with his “huge announcement” he’d been teasing, but it wasn’t really all that huge. Shocking, I know. McMahon said that whoever wins the WWE Championship match between AJ Styles, the current champion, and his challenger, John Cena, at the Royal Rumble in San Antonio will defend that championship against five other men inside the Elimination Chamber on February 12.

Styles, Cena and The Miz all came down to the ring, so it’s probably safe to say all three will be in the Elimination Chamber match in February. Miz and Styles traded barbs with Cena on the outside instigating more and more tension between the two. That led to the first match of the night with Styles and Miz squaring off against each other.

Styles and The Miz face off with Cena not far away

Styles and Miz had a good match, but it ended in a No Contest after Styles threw Miz into Cena, who was sitting at the commentary table at ringside. Cena was able to counter the attempt and wound up throwing Miz into the barricade himself. Cena chased Styles, but Miz attacked him from behind. That didn’t last long. Cena stood tall at the end of the segment after hitting two Attitude Adjustments on both Styles and The Miz, respectively.

We’re seeing The Miz ascending into the main event level on SmackDown and it’s well-deserved. It should be a good year for him.

Where is Natalya’s merchandise?

Not a bad segment here. Hopefully, the eventual Bella-Natalya match will be really good.

Randy Orton had a non-title match against Dean Ambrose and was accompanied by his Wyatt Family brethren at ringside. I feel like I should say it was a good match, because it was. I say that a lot.

Ambrose went for a suicide dive to the outside and hit Harper instead of Orton, and as Orton was prepping for the RKO on Ambrose, Harper randomly came into the ring and looked like he was about to attack. Wyatt jumped into the ring as Orton admonished him and told him to get out of the ring, which he did. During the distraction, Ambrose was able to roll Orton up and get the pin.

Orton and Harper traded punches before ultimately going their separate ways. Later in the program, Wyatt said Orton and Harper would face each other next Tuesday on SmackDown, and that the Wyatt Family will still be strong after they’re done with each other.

WWE Hall of Famer, Jerry “The King” Lawler, has revived an oldie but goodie – The King’s Court. Based on context clues, we could see something like this each week, or at least every other week. Lawler welcomed “his first guest,” Dolph Ziggler to the ring and asked him about his new attitude.

Ziggler said he knows Lawler blames him, and he should. Lawler responded, “How does it feel to know that no matter how many times you change your attitude, you’ll always be a loser?” Ziggler responded by superkicking Lawler right in his chest, causing JBL to run from the commentary table into the ring, stumbling along the way, to Lawler’s aid. Lawler yelled at Ziggler to get back in the ring, but he just left.

• Non-Title: AJ Styles (c-WWE) vs. The Miz w/ Maryse ended in a No Contest after Styles threw Miz into Cena, who was on commentary.

• Non-Title: Dean Ambrose (c-IC) d. Randy Orton by pinfall via a rollup after Luke Harper distracted Orton by jumping into the ring.

• Steel Cage Match for the SmackDown Women’s Championship: Alexa Blis (c) d. Becky Lynch by pinfall after hitting her with a DDT. Mickie James returned as La Luchadora and helped Bliss get the victory.