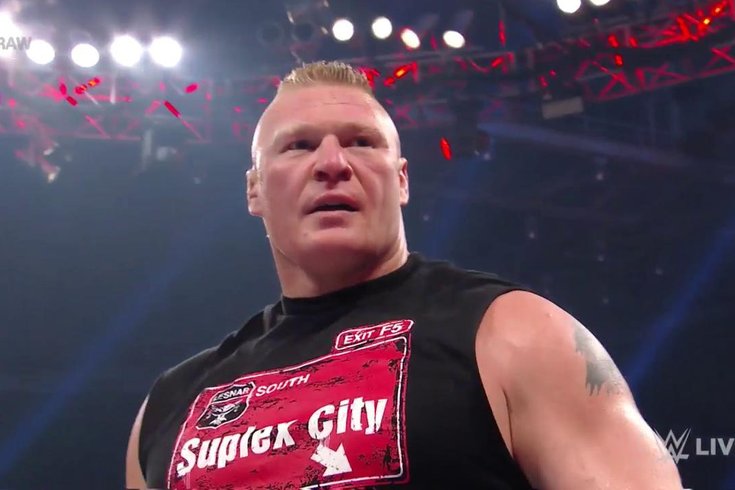 Brock Lesnar returned to Raw to put the other WWE superstars on notice heading into the Royal Rumble.

WWE’s flagship program, Monday Night Raw, emanated from the Verizon Arena in Little Rock, Ark. this week, just two weeks before they invade the Alamodome in San Antonio for one of the biggest Royal Rumble cards in recent memory.

Kurt Angle to be inducted into the WWE Hall of Fame

Before we get to what happened on Raw, we have to talk about Kurt Angle. It’s true, it’s true. One of the most decorated professional wrestlers in history is coming home.

Hours before Raw took the air, ESPN announced that Angle would be the very first inductee into the WWE Hall of Fame Class of 2017.

Triple H, the company’s Executive Vice President of Talent, Live Events and Creative, offered the following statement to WWE.com: “Kurt Angle’s accomplishments both in the Olympics and WWE were extraordinary. He was one of the most gifted athletes to ever enter the ring, and we are honored to welcome him into the WWE Hall of Fame.”

Angle told ESPN he was shocked to hear the news.

"I was shocked. I've been out of WWE for a long time and out of touch with them, so I didn't really expect this. It's a huge honor. This is the only Hall of Fame that I'm not in and probably [the one] I want to be in the most. This is the one that means the most for me. I had a lot of fun entertaining the fans for seven years with WWE, and I'm glad that my hard work paid off.”

"It was one of those things where, when I left WWE, it wasn't on bad terms. It was just that I couldn't do anything for them anymore because I was banged up and they couldn't do anything more for me. I never felt ill will against them. It wasn't like a nasty parting, it was just our time is up. You go your way, and I'll go mine."

"I figured they either decided they didn't want to do anything with me or they forgot," Angle said. "[Levesque] said they never forgot, and he called and told me this is the first thing they want to do. And whether I wrestle or not after this -- which is irrelevant right now -- I'm just really proud to be inducted into the WWE Hall of Fame.

"I gave a lot of energy and time to WWE those first seven years, and I'm grateful that they recognized it."

Angle is one of many amateur wrestlers that found success in mainstream professional wrestling. He was a two-time All-American and two-time NCAA Champion with Clarion University before winning a gold medal at the 1996 Olympic Games in Atlanta. Oh, might I add, with a broken neck.

He competed in TNA Wrestling for a decade before leaving the company in 2016.

It feels good to see Angle in WWE again, even if he never wrestles again. He did say that if he had his choice for one final match, he’d want his opponent to be either AJ Styles or Seth Rollins.

Tensions boil over heading into the Royal Rumble

Roman Reigns, sans the United States Championship that he lost last Monday night, opened the program with a promo. He wasn’t exactly well-received by the Little Rock crowd. Luckily for them, Paul Heyman didn’t waste much time interrupting him.

Though Heyman wasn’t accompanied by Lesnar, we all knew he would show up eventually, we just didn’t know when. The WWE Universal Champion, Kevin Owens, and the new United States Champion, Chris Jericho, also joined the fray talking about the upcoming Royal Rumble. Rollins wasn’t far behind, followed by Braun Strowman. Then, The Beast arrived.

Before he hit the ring, Sami Zayn attacked Strowman from behind and then all hell broke loose. Lesnar then took out Rollins and Reigns before taking out Zayn. Strowman and Lesnar stared each other down in a pretty cool moment before Reigns hit The Beast with the Superman Punch, but that didn’t put The Beast down permanently. He rebounded to hit the F5 on Reigns and left him lying in the ring to end the opening segment.

That would lead to the main event, with Reigns, Rollins and Zayn taking on Owens, Jericho and Strowman in a six-man tag.

Before the match, Zayn had to go over some team strategy in the locker room with Reigns and Rollins.

Zayn, Reigns and Rollins unfortunately couldn’t get the better of Owens, Jericho and Strowman. It was a fairly entertaining main event that told a few stories, including callbacks to earlier feuds which was nice, but Strowman ended the match after laying out Zayn with a running powerslam.

After the match, Strowman teased inflicting more punishment on Zayn and carried him towards the announce table, but Rollins made the save with a steel chair and then Reigns hit the spear on Strowman. They teased powerbombing Strowman through the announce table, but Owens and Jericho attacked them. Rollins laid Jericho out with The Pedigree on the stage, but Owens was able to get the upper hand on both Rollins and Reigns by slamming a steel chair on their backs. Owens then powerbombed Reigns through the announce table in a pretty awesome spot – something we haven’t seen him do in a long time – and end the program standing tall over Reigns.

This is what Owens has needed desperately for a while. He’s been a joke as the WWE Universal Champion and isn’t a serious character. This is hopefully a subtle change that we’ll be seeing moving forward in terms of his seriousness and how much he truly cares about his title. He needs to get over on guys like Reigns and Rollins more often, and then maybe, just maybe, he’ll be taken seriously as a star again.

The Dusty Finish keeps the gold on Cesaro/Sheamus

Man, I miss Dusty Rhodes. He would’ve appreciated this finish.

Cesaro and Sheamus defended their Raw Tag Team Championships against Luke Gallows and Karl Anderson on Monday night, and it was one of the better matches we’ve seen involving Gallows and Anderson in recent weeks. The two really haven’t been given a chance to shine, but this might be the beginning of the storyline of putting the titles on them.

I smell a rematch and it wouldn’t surprise me at all of Gallows and Anderson eventually win the titles before WrestleMania.

The Raw Women’s Champion decided to share her “winning strategy” during a promo on Raw, which was basically bringing up the past of Bayley and her poetry and old pictures with former wrestling legends. Apparently, that’s a psychological advantage for the champion?

Well, Bayley had enough and stormed to the ring as Flair called her an “average fan.” That was her strategy all along. But Bayley could see right through it and didn’t allow her to get in her head. Instead, she had a couple poems ready for her foe.

“Roses are red, violets are blue, at Royal Rumble, I will defeat you!”

“I can’t help but smile from cheek to cheek as just the thought fo the look on your face when I break your pay-per-view streak!”

“You called me a child and you say I don’t deserve to walk down that ramp. Well, in two weeks, you can call me your new Women’s Champ!”

Don’t even think about it – you can’t hang with Bayley’s rhymes.

In a pretty interesting angle, Nia Jax attacked Sasha Banks hours before Raw began while Banks was working on her “rehab” for her injured left knee. Banks was running the ropes and planting in the middle of the ring as WWE officials looked on before Jax blindsided her from behind and once again attacked her left knee.

This is a great use of WWE’s mobile platforms. It occurred on their Facebook Live feed and they had the video up on YouTube in a matter of moments. It also makes complete sense and makes Jax even more of a heel and makes the build to an eventual match between the two even hotter.

The New Day still in the Rumble?

Titus O’Neil still has some beef with The New Day. He interrupted their promo and wanted to face one of them with their spot in the Rumble on the line. Unfortunately for him, he couldn’t get the job done as Big E defeated O’Neil with the Big Ending, keeping all three members of the trio in the Royal Rumble match.

Over the weekend, WWE held a tournament in the Empress Ballroom in Blackpool, England to crown the first-ever WWE United Kingdom Champion. What an amazing tournament it was. Tyler Bate defeated Pete Dunne in the final in what could be considered a Match of the Year candidate. The drama and excitement was off the charts. If you haven’t checked out the tournament, I highly suggest you do On Demand on the WWE Network.

• Enzo Amore/Big Cass d. Rusev/Jinder Mahal by pinfall via the BadaBoom ShakaLaka. Hopefully that’s the end of this nonsense feud.

• Raw Tag Team Championship: Luke Gallows/Karl Anderson d. Cesaro/Sheamus (c) by disqualification after Sheamus knocked out the original referee, who called for the disqualification despite a new referee counting the pin after Gallows and Anderson hit the Magic Killer on Cesaro for the three-count.

• Non-Title Cruiserweight match: Rich Swann (c) vs. Tony Nese never began because Neville attacked Swann from behind during his entrance.

• Cruiserweight match: Cedric Alexander d. Brian Kendrick by pinfall via the Lumbar Check. Alicia Fox came down to ringside and helped Alexander during the match.