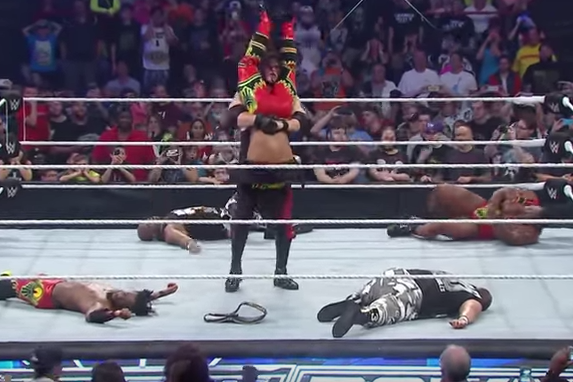 The WWE World Heavyweight Champion and the WWE Tag Team Champions headlined SmackDown Thursday night from the Times Union Center in Albany, NY, and those two parties coming together always makes for some entertaining television.

After SummerSlam when New Day regained their Tag Team titles, they’ve been on fire. Teaming up with Rollins, whose reign as champion has gotten significantly better in recent months, meant only good things for the audience Thursday night. While Raw felt like the go-home show to the MSG show on Saturday night, SmackDown had storylines advance and the focus was toward Hell in a Cell, which translated into one of the better SmackDowns in recent memory.

The WWE World Heavyweight Champion opened the show, and he was miffed at Kane for what happened on Monday Night Raw. Seth Rollins called out director of operations, Kane, and the vintage Big Red Monster obliged, coming out to the stage in a suit and crutches.

Kane’s still playing dumb, or he really is schizophrenic, which makes for some entertaining television. In fact, this is the most entertaining Kane has been in years. Here’s the thing: There’s nothing we can do about having the likes of Kane, and to a lesser extent, Big Show, on our televisions each week.

Rollins refused to partake in the main event that Corporate Kane made – a six-man tag team match pitting Rollins and WWE Tag Team Champions, The New Day, against the Dudley Boyz and Demon Kane – unless Corporate Kane took in the match from ringside. Corporate Kane agreed, much to the dismay, and confusion, of Rollins.

Like great tag team partners do, the champions tried to motivate Rollins before their match, and it was absolute gold once again.

During the main event, Corporate Kane was at ringside like Rollins had asked, so there was no Demon Kane to help the Dudleys. That is, of course, before Rollins took a suicide dive to the outside and hit Kane, who was sporting crutches due to Rollins’ attack on Corporate Kane on Monday night, he was helped backstage by medical personnel. That was the excuse he needed to morph into Demon Kane, as he came back out minutes later and attacked Rollins. The champion was able to run off before being absolutely destroyed by the Big Red Monster, as the Dudleys got the win with a 3D on Kingston.

Since we got to witness some New Day greatness on SmackDown, this seems like an appropriate time to mention just how fantastic they are. The trio has really gelled together and that translates on screen to the audience. It’s been a long time since we had an act so entertaining on weekly television, and that cannot be overlooked.

Unfortunately, I’m afraid WWE will have the Dudley Boyz win the WWE Tag Team titles on Saturday night at MSG. Not that they’ll have a long run with them, but I just have a feeling those titles are the most likely to change hands during this show simply so WWE can tout on Raw, “See what you missed if you didn’t watch our show Saturday night!” I can absolutely see that happening. The Dudleys are from New York, so that doesn’t help. I don’t necessarily mind if the feud between New Day and the Dudleys includes multiple title changes, and I’ve said that in the past. Feuds nowadays need multiple title changes between superstars because that really gives off the impression that anything can happen. Right now, I’m not feeling one-sided feuds. Especially when the champion always loses in non-title matches.

We have a second Hell in a Cell match to look forward to on October 25th, but I’m not so sure it includes the right participants. Bray Wyatt, along with his cronies, addressed Roman Reigns on Thursday night after their non-finish main event on Raw kind of marred an otherwise OK television main event. Wyatt said his eyes were wide open and he and Reigns together create chaos. Maybe a little foreshadowing?

Reigns interrupted, got in the ring with all three members of the Wyatt Family, and took the mic, saying those four fantastic words, “Hell in a Cell.” However, this entire feud has basically included Luke Harper and Braun Strowman on Wyatt’s side while Dean Ambrose was on Reigns’. Why not make it a handicap match or another six-man tag inside the Cell with Randy Orton finally teaming with Reigns and Ambrose like they teased before Night of Champions? That’d make more sense to me rather than Wyatt and Reigns alone in the Cell. Those two better have one hell of a match planned out, because as much as I love Hell in a Cell matches, I’m not feeling this one at all.

In what seemed like a black and white heel turn for Paige on Raw two weeks ago now has some shades of grey to it. On Raw Monday night, she joined the two women she turned against, Charlotte and Paige, for a match – and promptly left the ring after being hit accidentally by Charlotte.

Thursday night, Divas Champion, Charlotte, and Becky Lynch gave Paige an ultimatum – she’s either with them or against them. I’m not really sure why we need this angle since Paige should just run roughshod over the rest of the division until the eventual title match between her and Charlotte. Now we have a situation where Paige may be heel, or may not. It doesn’t make sense. Natalya’s inclusion into this angle now is a little confusing because the audience doesn’t know whether to cheer Paige or boo her, and that’ll directly affect how the audience greets Natalya. But, hey, at least the Divas division is getting a lot of airtime and attention, right? There’s one step in the right direction. Speaking of…

It’s about time Sasha Banks, Naomi and Tamina were back in prominent positions on television, as the trio defeated Team Bella in the opening contest Thursday night. It was a fun six-woman tag match, and Banks made Nikki Bella tap to the Bank Statement, much to the delight of the crowd who gave Team B.A.D. a resounding ovation once Nikki tapped. Pure hate for Nikki, or is Banks becoming more and more a fan favorite? I’d say it’s a combination of both.

The Intercontinental Championship was on the line Thursday night, as Kevin Owens defended his title against the former champion, Ryback. Sounds like a pretty good match for SmackDown. However, it’s been the same story for Owens matches for the last few months – leave the ring and get counted out on purpose. While that’s a great heel tactic and should absolutely be the ending for certain matches, Owens does it far too often for my liking. He’s had a less than stellar run since his feud with John Cena ended, and he’s become just another guy on the main roster. Nothing makes Owens special anymore. I can’t blame him – he’s doing what he’s told to do. And something makes me think he’ll drop the Intercontinental title to Ryback in the not so distant future. I hope I’m wrong.

Ryback says Owens has awoken a monster inside the Big Guy, something that’s been gone for the last few years. Owens actually got a lot of heat for the finish, if we don’t think WWE piped in any audience reaction, which is always the name of the game. Ryback got his revenge and hit Owens with Shell Shocked after the match. The two will likely have another rematch, and Owens eventually needs a clean win to really put himself over.

• Neville and the Lucha Dragons d. Stardust and The Ascension [Cosmic Wasteland] by pinfall after Kalisto nailed the Salida del Sol on Konnor for the win.

• Demon Kane and the Dudley Boyz d. Seth Rollins (c-WWE) and The New Day (c-Tag) by pinfall after a 3D on Kofi Kingston.