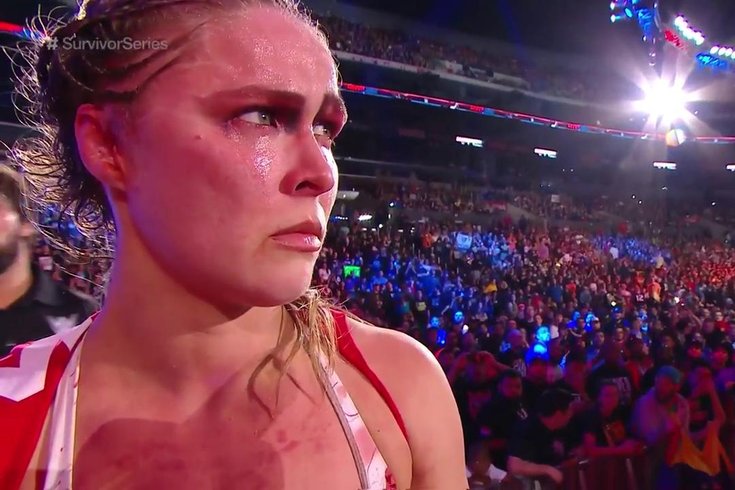 Ronda Rousey seemed confused by the crowd reaction to Charlotte Flair’s attack on her, hearing boos as she left the arena.

WWE’s two big brands went head-to-head on Sunday night, as one of the biggest pay-per-views of the year took place in Los Angeles. The Staples Center was the epicenter for WWE’s annual RAW vs. SmackDown event headlined by a Champion vs. Champion match and Ronda Rousey going one-on-one with Charlotte Flair.

With three classic Survivor Series elimination matches, a Cruiserweight Championship match, and two other Champion vs. Champion matches, this card looked pretty stacked. And it turned out to be a great show despite the card’s top two matches being changed less than a week before the event.

Let’s get to the action:

These two teams couldn’t be more different. The RAW side lacked any star power and the SmackDown side was tripping over talent. However, the end of the match almost made up for the discrepancy in the teams.

The final four were a perfect mix of potential on the RAW side vs. legit Hall of Fame credentials on the SmackDown side with Gable, Roode and The Revival dueling with New Day and the Usos. The four teams were given plenty of time to show off, and it ended with the Usos going over The Revival, which was predictable but necessary. It was a very good preshow match and whet the appetite for what was to come later in the nigh; just nothing went SmackDown’s way again.

Boy did the Staples Center crowd not like Nia Jax at all when she was introduced. They booed her almost every time the spotlight was on her, and why not? She destroyed the Becky Lynch vs. Ronda Rousey match – which could have very well been the main event for this show – by accidentally breaking Lynch’s face with an errant punch on Monday Night RAW.

The fans certainly didn’t forget and they let Jax know it. Knowing she would likely be booed due to her forcing Lynch out of her match with Rousey, and with how hot a streak Lynch has been on recently as being one of the most entertaining promos and in-ring wrestlers in the world, it made sense to get as much heat on Jax as possible. And that’s exactly what they did.

When it was down to Jax and Banks against Asuka, Jax shoved her partner off the top rope into an Asuka Lock, where she was beaten before Jax took advantage of the situation. Jax dropped Asuka with a Samoan Drop to get the win for her team, and another chorus of boos from the crowd as she stood tall.

WWE apparently wasn’t even counting the preshow match between SmackDown and RAW, so they gave RAW the 1-0 edge after this one. But that’s wrong. I won’t let them dictate that because it’s 100% positively, absolutely wrong. All Jax did was tie up the score, 1-1.

I’ve never been a fan of those red RAW and blue SmackDown t-shirts, and I definitely wasn’t a fan of those during this particular match. To Rollins’ credit, he at least had one of his own t-shirts stitched to a RAW shirt, but Nakamura – who was wearing new blue ring gear – apparently had to wear a blue SmackDown shirt. It just ruins the whole dynamic. Like we don’t know what superstar is on what side after being reminded about a thousand times the last couple of weeks. This certainly wasn’t the only match that we had to deal with the wrestlers wearing these lame shirts, but it just finally hammered home the lunacy of a decision like this.

However, the t-shirts didn’t take away from a very good match. Rollins vs. Nakamura was set to be a great one and it didn’t disappoint. A hot ending saw Rollins duck a Kinshasa attempt into The Blackout and give the Intercontinental Champion the win.

Drake Maverick was on AOP’s side with the Big Show on The Bar’s. Maverick would get involved by putting a foot on the rope to break a count and then run away from Cesaro. He ran right into the Big Show, who wound up choking him on the ring apron until he pissed his pants.

Thanks to the distraction, AOP hit Sheamus with their finisher and got the pin. RAW on a roll, 3-1.

So, we go from a segment making Drake Maverick look stupid to a segment making him a serious figure as the general manager of 205 Live who put together this match. Go figure. It’s almost like they want to sabotage their own characters.

However, 205 Live has been a good show for a good while now, and this match was set to highlight the progress the show has made into becoming a show to keep an eye on. Murphy and Ali came to put on a show, and did a great job of that.

Most live audiences never seem to be into the Cruiserweight matches. At least, they’re not very vocal during them. And this was the case during this match, where the crowd didn’t seem to get into the match until halfway through. And that’s a testament to just how good Murphy and Ali were working together. Fantastic match here and while I was hoping to see a title change just because, Murphy hit Murphy’s Law for the win to retain.

As Braun Strowman was getting ready to start the match for his team, Drew McIntyre tagged himself in. As the two stared at each other, Samoa Joe locked in the Coquina Clutch and I honestly thought that would be it for McIntyre. However, he countered the move and hit Joe with the Claymore Kick and pinned him for the elimination.

What a way to start the match. The fans weren’t happy Joe was eliminated rather quickly. However, they were all in on Shane McMahon hitting his patented elbow drop from the top rope onto anyone on the announce table.

A little later, Rey Mysterio hit Strowman with the 619 and garnered a huge pop from the crowd. However, once Mysterio eliminated Bálor, McIntyre attacked his teammate and threw him out of the ring. Not nice.

With Shane McMahon the only man left for SmackDown, Strowman eventually took care of him to win the match for Team RAW.

Corbin attacked Strowman from behind before running off with the other survivors, McIntyre and Lashley. RAW goes up 4-1, or 4-0 if you don’t count the preshow.

This was originally scheduled to be Rousey taking on the SmackDown Women’s Champion Becky Lynch. The promos leading up to this match were great, and Lynch and other SmackDown superstars invading RAW the week prior was great even though we’ve seen things like that numerous times through the years.

Unfortunately, Lynch suffered a broken face due to a Nia Jax punch during that segment on RAW, and on SmackDown picked Charlotte Flair to take her spot in the match. Lynch is still the champion and hopefully will be back in action soon and a future match against Rousey awaits.

Without any build for this match, it felt like the rumored WrestleMania main event tilt between these two lost its luster. But as Rousey has been prone to do during her big matches this year, she came to put on a show and did just that, and had a perfect partner in the dance in Flair.

This turned out to be the best match of the night, and possibly a Match of the Year candidate. The counters each wrestler had and the selling by each made each moment that much more impactful. Rousey was bloodied up early in the match, but held her own regardless.

But instead of a clean win, we got a disqualification after Flair struck Rousey with a kendo stick on the outside of the ring. Flair then proceeded to beat her senseless with the stick back in the ring. She put a steel chair across her throat and stomped on it, causing a mad rush of officials from the back to break it up after referees had failed to do so.

But after Rousey got to her feet and apologized to the crowd – I’m still not sure why, she technically won the match – she kept looking at the crowd with a somber and confused look as the boos rained down. Was Rousey now a heel? Will Lynch finally become a flat-out babyface? Did Flair fully turn heel or will she be a tweener? Still a lot of questions. But, one thing’s for sure – Rousey, Flair and Lynch have all the tools necessary to main event WrestleMania.

A week before this pay-per-view took place, it was penciled in that Lesnar would face AJ Styles in a Champion vs. Champion contest. The two also faced each other at last year’s Survivor Series pay-per-view, so I wasn’t sure if a rematch was going to really move the needle.

But once Lynch’s injury hit, what many considered the Survivor Series main event was ruined. Bryan defeated Styles for the WWE Championship on SmackDown via nefarious means, which seemingly made him a heel heading into this match. It was still Champion vs. Champion, so Styles got booted off the card and Bryan, who was now the WWE Champion, was in.

Lesnar vs. Bryan is a match I’ve always wanted to see, but in the early going of this one, I felt bad about it. Lesnar dropped Bryan on the side of his head doing a german suplex, and I thought Bryan was out. Lesnar continued to dominate Bryan for a loooong few minutes, but Bryan finally made his comeback.

Talk about great storytelling. Bryan got Lesnar with a low blow after an F5 attempt was countered and Bryan’s feet accidentally hit the referee. Can’t call a disqualification on something he doesn’t see! Bryan then hit Lesnar with a running knee and pinned him for 2.999999999 seconds. It was a close one, folks.

Bryan then got more offense in, eventually getting Lesnar in the Yes Lock and having Lesnar nearly tap out twice. But, alas, Lesnar was able to counter and eventually hit an F5 on Bryan to get the victory.

•  The elimination matches were all good. They’re much better booked now then they were back in the 2000s. I still like the concept and the fact that we see multi-wrestler matches all the time on TV hasn’t really diluted these matches in recent years.

•  Rousey and Flair had a great match. Won’t be surprised if they keep that as the WrestleMania main event.

•  Bryan knows how to get fans emotionally invested in his matches, especially when he’s dumped on his head and neck. WWE’s not putting him out there if he’s going to put his life in danger. His comeback and near fall had the world talking, and he looked fantastic in the loss. And Lesnar deserves a ton of credit for that, too.

•  Not having the preshow count hurt the whole story of RAW sweeping the PPV. Just have the RAW team win that match then.

•  SmackDown not looking hot one year away from their big move to FOX. One year is still a long time away and I’m sure they’ll do some sort of Superstar Shake-Up leading up to the move.

•  Rollins vs. Dean Ambrose for the Intercontinental Championship at TLC in December was made official. That needs to be the main event.