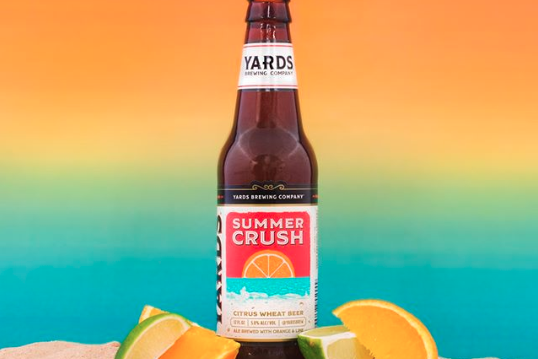 Yards announced its newest beer, the Summer Crush, a citrus wheat, will be available May 1.

The Philadelphia brewery revealed on Instagram over the weekend that Summer Crush, a citrus wheat beer, will be available beginning in May on draft at its taproom. At 5% ABV, this pale, hazy specialty beer is brewed with orange and lime zest.

Summer Crush also will be sold in 12-ounce bottles, and the beer already has started to appear on the shelves at beer distributors and bottle shops. Cans are on the way sometime this summer before June.

Yards seems to be settling into its new 70,000-square-foot facility at 5th and Spring Garden streets in Northern Liberties, which is twice the size of its previous taproom on Delaware Avenue. The upgrade was made partially to increase production and add cans to the lineup.

Summer Crush is the first new beer to come out of the Spring Garden Street taproom location.