Yesterday's trash is today's treasure thanks to Jean Shin's vision 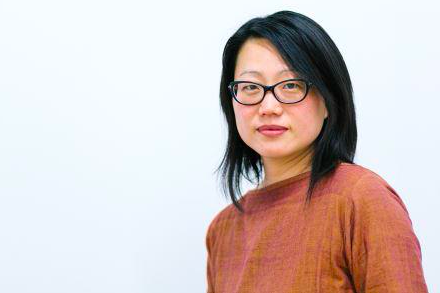 When acclaimed Korean-American installation artist Jean Shin and the Philadelphia Museum of Art (PMA) present “Collections” this weekend, six expansive works made up of crowd-sourced materials will tell tales of inclusion, exclusion, identity and community.

That those materials happen to be old sweaters, shoes and military uniforms – from Asian-Americans along the East Coast and area war veterans – shows that Shin’s “Collections” burrows into the memories and emotions of those same communities that donated their used possessions in the first place.

Such deeply felt focus makes the artist’s PMA installations radically different than anything she has executed in Philadelphia in the past. That includes the discarded computer keyboard keys of her previous Philadelphia exhibition at the Fabric Workshop and Museum in Chinatown.

"That was a great experience – working with the Fabric Workshop – and a nice introduction to Philadelphia," Shin told PhillyVoice from her Manhattan studio.

"I look at the organizations with whom I am working rather than the cities they are in, and both the Fabric Workshop and the PMA are outstanding in their respective fields when it comes to aesthetic vision and professionalism. It says a lot that you have a city that can hold so many cultural institutions that speak to so many diverse voices without overlap."

PMA curator Hyunsoo Woo laughs a little when she recalls the earliest stages of putting together the six installations that make up “Jean Shin: Collections.” Woo was a Manhattan curator when she first discovered Shin’s work.

“It was the 'Unraveling' assemblage made up of sweaters from New York City’s Asian-American artist community," said Woo.

"I heard, too, that she was looking for donations, and if I wanted to be part of the installation. I thought it would be an interesting and wonderful opportunity. So, I'm part of that work and have been for 10 years."

That is how Shin reaches into her immediate audience – by making them a literal and physical part of the work.

"Once you contribute to art, you naturally want to see where the artist is going, not only with the piece you contributed to but anything else they accomplish," said Woo.

"I fell in love with her work and her levels of engagement." 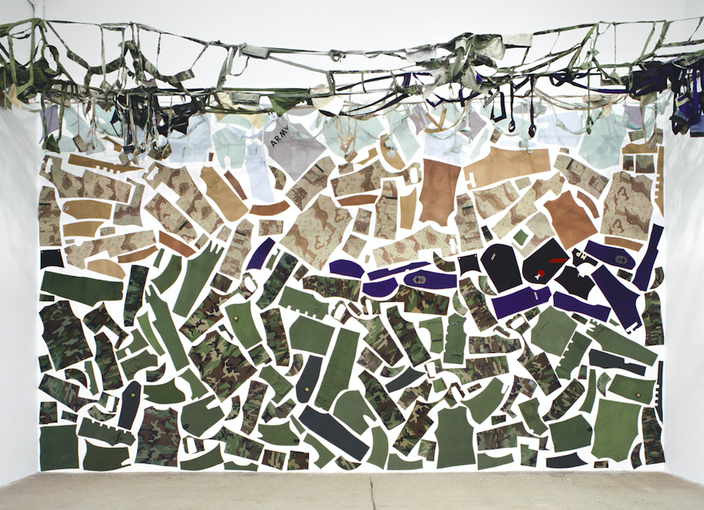 Courtesy of the Philadelphia Museum of Art /for PhillyVoice

When Woo unveils "Unravelling" as one-sixth of the PMA's overall Shin exhibit, it will include clothing from Philadelphia's Asian-American artist community. In particular, Philly's Asian Arts Initiative came to the rescue when called upon to donate sweaters and shoes to several different exhibitions under the umbrellas of "Collections."

When Woo got to Philadelphia, she believed that the PMA and what it usually exhibits could benefit from more diversity and inclusion when it came to other cultures and ethnicities.

"To my knowledge, there have not been Korean-America artist works in solo exhibition at the PMA," said Woo.

"As soon as our textile gallery in the Perelman Building became available, I immediately jumped at the opportunity to feature Shin there. The Perelman is not my usual exhibition playground, but, Shin is exactly the sort of contemporary artist that speaks to the Perelman's textile-based work and so many other angles – found craft and community engagement among them."

Shin's laborious and time-consuming transformation of materials into fresh, rich mosaics is her signature, and part of every installation under the "Collections" umbrella. Woo believes that the artist is always making herself anew, and therefore, is difficult to pin down.

"She's constantly challenging herself by reaching into communities that she doesn't have relations with or direct knowledge of, such as asking for uniform donations from our Armed Forces," said Woo.

Woo is talking about the "Armed" installation where Shin visited, interviewed, and collected uniforms from former and current members of the U.S. Army, Navy, Air Force, and Coast Guard. 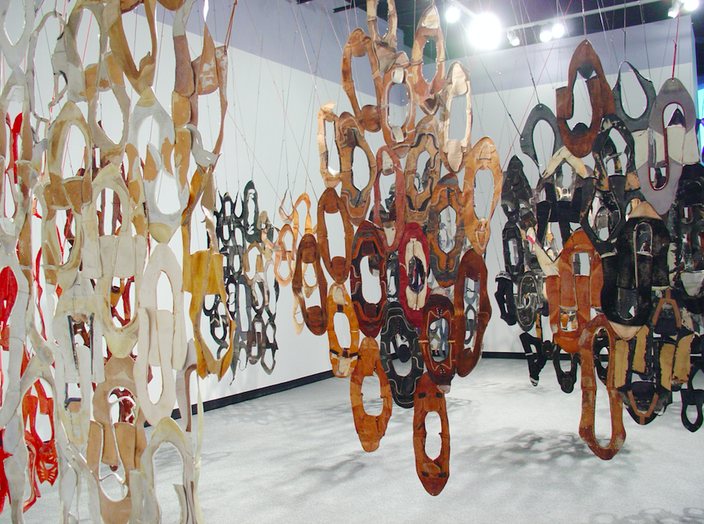 Courtesy of the Philadelphia Museum of Art /for PhillyVoice

"I see the materials and their time and their use as passed by the previous owner," said Shin.

"But for me, their potential has just begun. I have them hovering between new and old contexts. Memories and lived experience are still part of their prized and treasured world."

In the case of "Armed" and its uniforms, stories shared between Shin by their donors were private and personal at the same time.

With a nod to the PMA and its wide-scale collection of works from Dada godfather Marcel Duchamp and his found object aesthetic, Woo sees Shin as part of that tradition.

"Of course, there's always Duchamp," said Shin with a laugh.

She knows that she is not the first artist to embrace discarded materials or their memories. What differentiates her brand of art from other "trash"-based creators is that Duchampian outlook towards giving found objects new life and new meanings.

"But I don't think of them as only discarded, but rather more accessible and available to us all – working outside of and resisting the traditional material of art. If anything, what I truly love is that my materials resonate with everyday people whose experiences are embodied by them…I think it's helpful to see patterns in our society of how we consume and how we discard. I don't look for that which is discarded, but rather anything that is attractive to our lives."

"Jean Shin: Collections" starts Saturday, March 24 and runs through Sunday, July 15 at the Ruth and Raymond G. Perelman Building of the Philadelphia Museum of Art, 2525 Pennsylvania Ave. It's open Tuesdays through Sundays from 10 a.m. to 5 p.m. Admission is $14-20.