You should put this Northern Liberties café sign through Google Translate

They're not talking about roasting beans over there 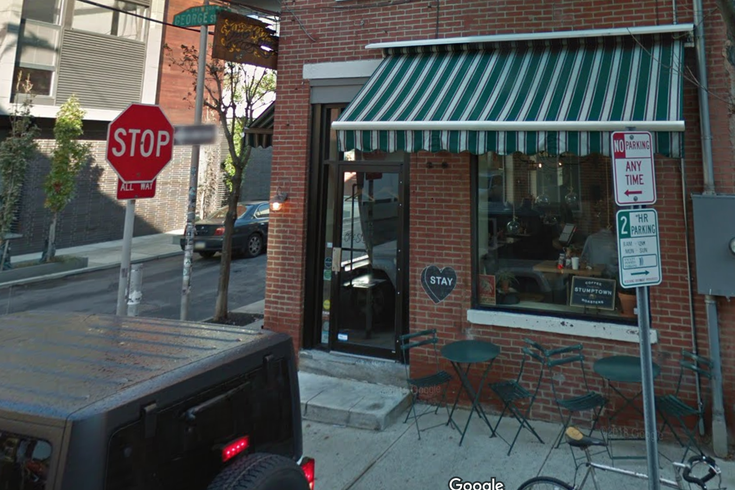 The storefront in question, pre-French.

A viral post on Reddit’s r/France page caught the attention of some Philadelphia users on Monday.

The post was titled “Vu à Philadelphie, ‘put something in French on the window, it'll look classy’” and featured a photo of One Shot Café, a coffee shop in Northern Liberties. Specifically, it featured the view of the coffee shop from George Street.

The sign is… well, let’s just say it’s not a sentence you expect to read at your local café:

If you’d like to find out what the sign says, you can run it through Google Translate. It’s a lot.

The user, u/von_tenia, explained (in French) how they came upon the inappropriate sign:

“I was visiting the hipster neighborhood of northern liberties, and I do not know any more actually ... I should have gone back to check if that was their intention. If someone living in the area has more info ... I am curious too.”

It turns out the sign hasn’t always been in the shop’s window. For example, the Google Street View from November 2017 doesn’t feature the phrase on the George Street side.

As does this one:

As does this one:

Do not miss your chance to blow 💨 #tuesdays #coffeeshopdiaries #whyilovephilly

In February, one Instagram user noticed what was happening here:

(NSFW, and also spoiler alert in case you haven't figured out that Google Translate yet!)

So i wonder if @oneshotcafe know that their window is telling people to go fuck themselves in the ass? I gotta know!

And on a post from July, one user took to the comments to note that the sign was not politically correct, and also offer a grammatical note.

One Shot Café’s official Instagram responded: “GTK”, which in this context would seem to be (?) a winking “good to know.”

PhillyVoice reached out to One Shot Café on Tuesday afternoon for comment via phone and email. The email replied, "bien sûr, je sais ce que signifie mon signe", which in English means, "Of course I know what my sign means."

We’re going to start translating every French phrase we see in storefronts from now on, because people are clearly out here having fun with foreign languages.