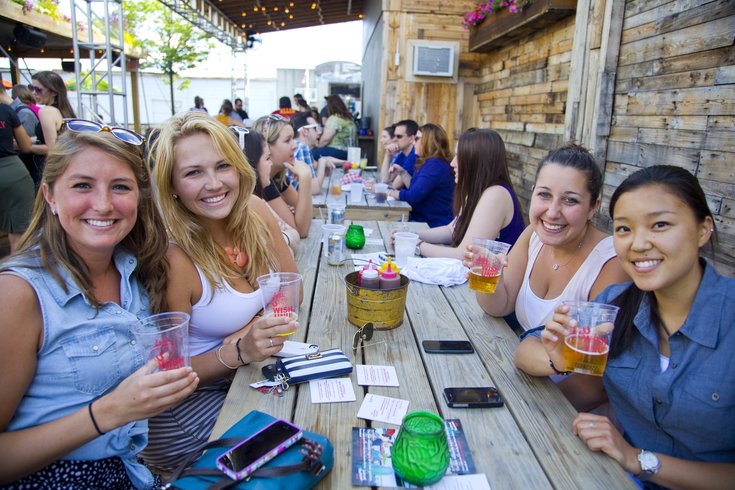 Research from the Wharton School found that the presence of bars, restaurants and theaters plays a strong role in drawing college-educated adults to America's cities.

Back for its eighth year, Philly Beer Week runs from Friday, May 29 through Sunday, June 7. It’s the largest event of its kind in the United States, with more than 1,000 listings — from huge blowout parties to tap takeovers to pop-up beer gardens to homebrewing classes, and on and on.

According to PBW director Kristine Kennedy, visitors come from all over the country and even the world for 10 days of sudsy fun. “In almost every bar there’s somebody from out of town who traveled here, who planned their vacation around Philly Beer Week,” Kennedy says.

“We had a journalist from England here last year who was so inspired by it that he went back and started London Beer Week, and there are two Philadelphia expats who began Paris Beer Week last year; it’s infectious, people love the idea of it,” Kennedy says.

But the massive scope and size of PBW can make it challenging for even beer-obsessed locals to wade through the events and come up with a game plan.

A smart first step is to get the 2015 PBW app (available for iPhone and Android). It’s searchable by date, location, neighborhood and brewery. Most PBW events do not require tickets or advance reservations, so you’re practically guaranteed to find an event at a nearby venue that fits your criteria, even at the last minute. Follow @phillybeerweek on Twitter for updates.

In the meantime, read on to get a taste of what’s in store.

PBW mascot The Hammer of Glory (HOG) makes its customary trek through the city before arriving at the 23rd Street Armory for the official kickoff party. Over 1,000 guests sample beers from more than 40 local breweries as well as two PBW collaboration beers, Brotherly Suds VI and Leuven on a Prayer. VIP ticketholders get early 6 p.m. admission and DiBruno Bros.’s beer-and-cheese pairings.

One of the largest beer festivals in the country, the Great Beer Expo showcases 75 breweries, more than 200 beers and local food trucks. VIP ticketholders attend a meet-and-greet with brewers and taste special beers beginning at 12:30 p.m. Proceeds benefit the Philadelphia-based Committee to Benefit Children.

Philly is the second stop on the Deschutes Street Pub’s first nationwide tour. The Oregon brewery will transform Headhouse Square into “outdoor pub of epic proportions,” complete with a 400-foot bar and food from Alla Spina, Lo Spiedo, Mom Mom’s Polish Food Cart and The Twisted Tail. All proceeds go to the Vetri Foundation for Children.

Sunday, May 31, 11 a.m.–12 midnight (events and specials are staggered throughout the day); 1904 East Passyunk Ave.; tickets $35 for Rock the Block party (kids are free), other events pay-as-you-go

At this sixth annual showdown between Kite & Key owner Jim Kirk and Yards Brewing owner Tom Kehoe, beer-world celebrities take over a block in the Fairmount neighborhood for a fun battle royale.

PBW Beer Garden at The Shambles

The official PBW beer garden at Headhouse Square returns for five evenings beginning on Monday, June 1. The first night features the two PBW collaboration beers, plus a selection from top local breweries. Count on at least eight taps from local and national breweries Tuesday through Friday.

Too Many Cooks in the Kitchen

On the last day of PBW head to West Philly for beer, pizza and music at the seventh annual party at Dock Street Brewing Company, Philadelphia’s first microbrewery.

For the whole family:

Parents and kids alike will enjoy Saint-Gobain’s Future Sensations, “five distinct ephemeral pavilions that take visitors on a sensory journey of science, storytelling and art.” While there, grab some refreshments from The Oval’s beer garden and a rotating lineup of food trucks. Everybody wins!

May 30–31 and June 2–6, hours vary, check theovalphl.com; Eakins Oval in front of the Philadelphia Museum of Art; pay-as-you-go

For a good cause:

On the heels of the first big drinking weekend, restaurants and bars citywide refocus on food — pairing oysters on the half shell with craft beers.

For the geekiest of beer geeks:

At this workshop led by University of the Sciences faculty and staff from local breweries, home brewers learn how to sharpen their skills as their beer samples undergo a series of analytical tests.