Zipperhead is (sort of) coming back to South Street 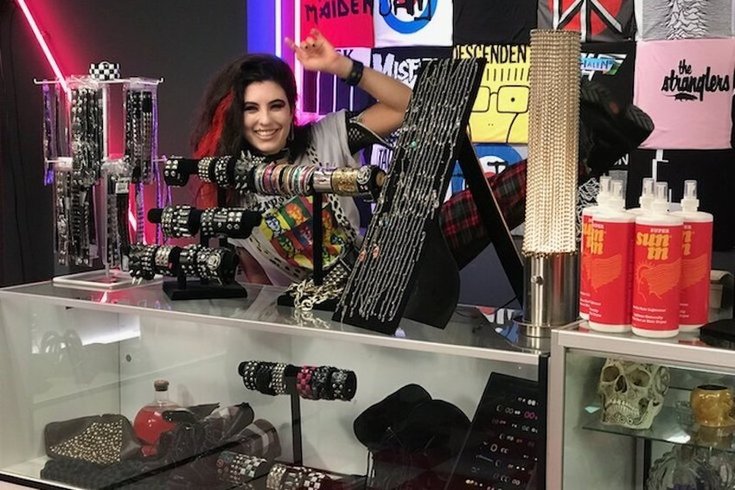 Tedra Millan, in the role of a store clerk at Zipperhead, the erstwhile punk-rock mecca once owned by her father, on an episode of The Goldbergs, which airs on ABC-TV on Wednesday, Oct. 3 at 8 p.m.

Philadelphians of a certain age remember the punk-rock mecca called Zipperhead, an eye-catching emporium located near 4th and South streets until it closed its doors more than two decades after opening.

Next Wednesday, Philadelphians – and sitcom-watching Americans of all ages – will see Zipperhead foisted back into the public’s conscience courtesy of an episode of “The Goldbergs” television show which has long tapped into the Delaware Valley of old.

There’s good reason that the “You Got Zuko’d” episode came to be: Show creator Adam F. Goldberg from Jenkintown was, when younger, exposed to the glory that Zipperhead was.

“Growing up in the 80s, one of my favorite things to do with my friends was to head to South Street which was the polar opposite of living in Jenkintown,” said Goldberg.

“Our favorite place was Zipperhead which defined cool, especially for a suburban geek like me.”

Zipperhead was the brainchild of Rick Millan, who opened the store in 1980 and ran it until he “retired from retail in 2000.” A pair of former employees took over and, several years later, moved the operation – renamed “Crash Bang Boom” – around the corner, where it still carries the tradition on today.

In advance of Wednesday’s premiere of the Zipperhead episode of an ABC sitcom, Millan talked to PhillyVoice about the store’s past and how the show prompted him to organize a reunion of former employees who will gather to watch the show next week.

So, how did this episode come to be?

Back in July, I got a random email from a woman named Carly requesting to use Zipperhead in an episode. She sent me the script. It had to do with (the character) Adam’s girlfriend going punk over the summer, so he went down to the store to get transformed.

I was flattered and signed the release. They requested pictures of the exterior and interior, and one of the pictures I sent back was of my son Josh and daughter Tedra in the window as live mannequins. The kids loved that store, probably too much. They’d get their hair spiked up, wear leather jackets, that sort of thing.

I told them that my daughter is now an actor, gave a link to her site, and said "How cool would it be if she were in the episode?" I got a response saying they would sent it off to casting, that they had no control over that.

In the meantime, I told my daughter about it, and two weeks later, she got a call from her manager asking her to do a self-tape of a punk girl working for a punk-rock store. She thought, "Oh my God, that’s my dad’s store." She donned a vintage Zipperhead shirt, did the video and sent it off. They loved it and brought her out to L.A.

The set they had out there is unbelievable. It looks so real. The T-shirt wall. The Zipperhead sign. The hot-pink painted walls. The checkered floor. The whole thing is just bringing everything back to me. 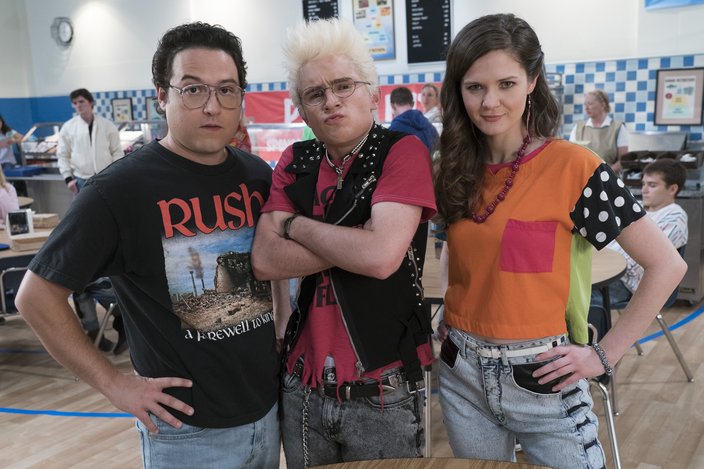 Sean Marquette, Sean Giambrone and Alex Jennings on the set of an episode of 'The Goldbergs' which includes famous South Street store Zipperhead.

I was telling my kids this past year that they were too young to remember I used to be somebody and it’s a shame they missed it.


I vividly remember my daughter pretending to be a clerk when she was young, standing behind the counter, banging on the register. It’s just so ironic that she gets to play a punk-rock store clerk in my store. That’s what’s so incredible about the whole thing. It’s a dream come true.

The cool thing about Adam is that he likes things to be authentic. Well, how more authentic can you be?

What does it say about Zipperhead that its legacy still lingers, and will get a boost on a nationally seen TV show next week?

The whole thing is just surreal. It’s brought a whole lot of fans out. I posted about it on Facebook and the post went viral.

People really respond to Zipperhead. It’s a part of their past, the whole South Street at its peak thing. It was the happening place to be. Bands used to come through all the time if they were playing at Ripley's, the East Side Club, Grendel's Lair. Alice Cooper was there. We decided to paint the sidewalk blood red and the bands would sign the sidewalk. We put the ants up, and the zipper going up the building. It was such a crazy thing.

The Dead Milkmen song, "Punk Rock Girl," cast us in the national spotlight.

It added to the mystique of Zipperhead. People would come in to check it out. They wanted to know who the “punk rock girl” was. We had a lot of musicians who worked in the store, so they had a wild look about them which all added to the attraction.

Take me back to the closing of the store. Do you wish it hadn’t?

I retired from retail in 2000 and turned the store over to long-term employees who were married at the time: Stephanie Jolles and Rob Windfelder. They ran the store for five more years and then relocated around the corner. They gave it a new name – Crash Bang Boom – and they’ve been there since. All total, they’ve carried the tradition on for 18 years now.

I think it was an evolution. South Street became a Boardwalk, people gawking at the employees. When it moved around the corner, it became a destination place for people in the know. It’s a more serious commercial endeavor than just a Boardwalk spot. It still gets punk bands coming through. Rob’s a musician, so he’s still out there performing. You walk in and you see Stef, with the purple or magenta hair.

They were incredible employees. I’m so happy they kept it going. I’m really proud of them.

Who would have thought that punk would live after opening in 1980 and now it’s 2018?

Can you share a couple Zipperhead stories that wouldn’t exactly be suited for a family-friendly audience like the Goldberg’s?

We – you know, I’m not sure I want to put this out there – but when Kurt Cobain passed, we put out a T-shirt with his death certificate and RIP Kurt on it.

Well, Courtney Love happened to be in town a few weeks afterwards. She came to the store and she was, shall we say, buzzed. She saw the T-shirt and freaked out. She threw everything off the counter, yelling, "Get that f****** T-shirt off the wall." She made a really big scene.

We didn’t have the internet then, but it got out on the wire. Every paper, FM station, it went viral even though we didn’t use the word back then. We were embarrassed, getting live calls from radio stations asking to describe what happened. 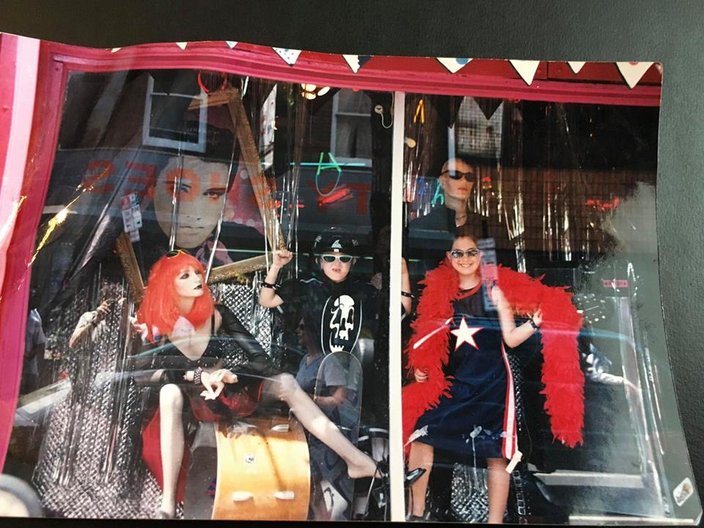 Josh and Tedra Millan as mannequins in the front display at Zipperhead, the South Street punk-rock emporium once owned by their father Rick.

Another thing I’m not proud of is an ad campaign we did – Extreme Clothes for Extreme Times. It was a series of posters and the ad agency, in its infancy, had full artistic license over what to do.


The posters were plastered all over construction sites all over the city. There was Charles Manson “everybody has the occasional urge to go wild. One day, you snap.” Jeffrey Dahmer, "Go a little crazy inside now or a lot of crazy later.” There was a “keep an open mind” one with an African-American gay man with a sort of nondescript bald white guy hugging naked. Another “keep an open mind” with a punk chick kind of topless, fingers down her pants, smoking a cigarette.

The city woke up to this one day and it got a lot of attention. It was way back in the early 90s. It pissed people off. We got a call from a Dahmer victim’s family and we took it down. I felt really bad. It was not our intention to do that, but that was the effect.

What I learned from that was all people would say is “Oh, Zipperhead, that crazy store” and that’s what it’s all about.

You’re having a party for old employees to watch the episode when it airs next Wednesday. What does that togetherness mean to you?

It’s sort of a little fraternity. I recently moved from the suburbs into town, to a building in Center City that has a really ridiculous rooftop social room. I keep in touch with old employees mostly through Facebook and put it out there so we could have a little reunion where we could watch the show together.

I plan on bringing out memorabilia: framed posters and pictures of the store, the original rendering of what the façade was going to look like. I’m decorating the room with all that old stuff and we’ll watch it together.

I’m technically only supposed to have about 30 people there. But, we’re all about breaking the rules. I’m expecting 50. It’s going to be fun.

It’s a thrill of a lifetime. The fact that they’re bringing Zipperhead and South Street back into the public eye, it’s just going to be really fun to have the old days back.