Mike Quick, Merrill Reese and others to appear on 'The Goldbergs' Eagles tribute 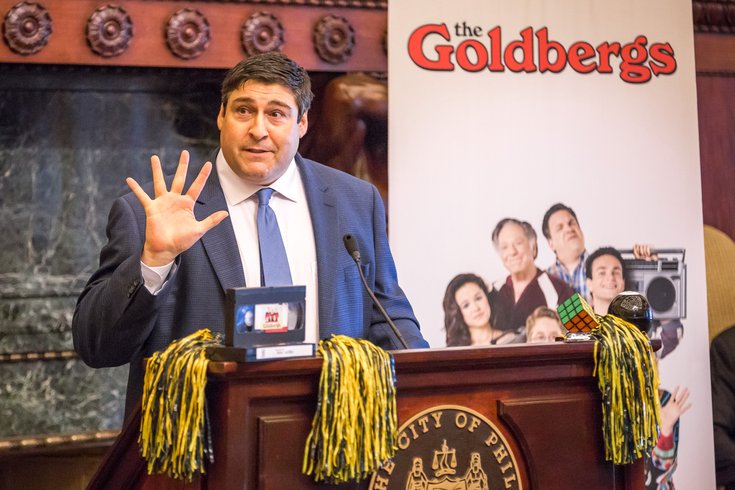 Philly-area native and producer of "The Goldbergs," Adam F. Goldberg speaks at a press event at City Hall, Friday, Sept. 15, 2017.

The episode will air at 8 p.m. Wednesday and features longtime Eagles broadcaster Merrill Reese and his partner in the radio booth, Mike Quick. Eagles General Manager Howie Roseman and President Don Smolenski will also make cameos in the episode, according to a press release.

The group filmed their appearances with the cast of "The Goldbergs" during the Eagles' trip to Los Angeles in December.

The show, which was inspired by Goldberg's Jenkintown upbringing and centers on a family living in a Philly suburb in the 1980s, will integrate '80s references in the episode such as the Eagles' 1988 rap video, “Buddy’s Watchin’ You,” the Chicago Bears’ “Super Bowl Shuffle” and a Nintendo game featuring a showdown between the Eagles and the New England Patriots.

“Watching Eagles games with my dad whether at the Vet or in our house was a big part of my childhood,” Goldberg, the show's creator, said in a statement. “Like Eagles fans everywhere, we waited a long time to see them win the Super Bowl. This episode is my way of celebrating with my father who is no longer with us, and uniting Eagles fans everywhere.”

The cast will gather for an "E-A-G-L-E-S, Eagles" chant at the end of the episode, the show said.