By Rob Ritrovato, Vizion Group for the Kennel Club of Philadelphia 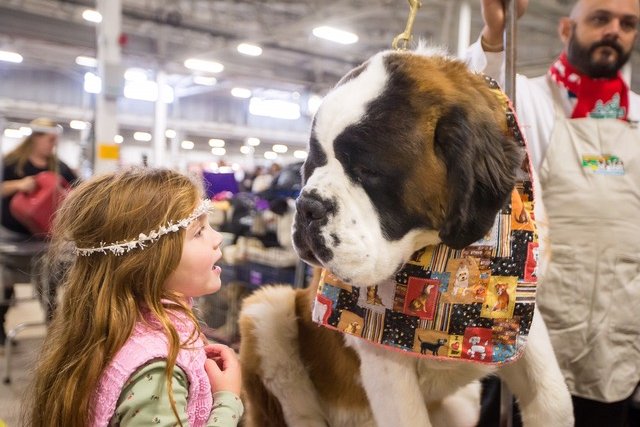 This year’s National Dog Show is set for Saturday and Sunday, November 18-19.

National Dog Show research shows that a day at the November dog show at the Greater Philadelphia Expo Center in Oaks for a family of four costs less than half of any major Philadelphia sporting event. The research used information provided by Temple University’s Sport Industry Research Center (SIRC) and the Sport Management School at the University of Michigan.

With ticket prices of $16 for adults, $7 for children 4-12 years old (kids three-and-under are admitted free), the Kennel Club of Philadelphia’s National Dog Show in November boasts the best family entertainment value in the region. For two adults and two child-age tickets, plus hotdogs, soft drinks, and souvenirs, a family day at the National Dog Show adds up to just $124. A similar package for a family of four at a Philadelphia 76ers game costs more than twice as much at $275; Philadelphia Flyers tickets are more than three times the price at $386; and Philadelphia Eagles tickets are almost four times as expensive at $482.

In two years of research commissioned by the Kennel Club of Philadelphia (KCP), Temple University students and members of its Sport Industry Research Center visited the November event at the Greater Philadelphia Expo Center and found that the average stay for a family at the Dog Show was 3.5 hours, comparable to the length of those other sporting events. The cost of parking, which is free at the National Dog Show, but not for the other events, is not figured into the numbers. The Sport Management School at Michigan compiled the other Philadelphia pricing totals.

“We are thrilled that the National Dog Show is hosted in Montgomery County,” said Valley Forge Tourism and Convention Board Chief Marketing Officer, Ed Harris. “The research shows what we in tourism talk about all the time, that the value proposition of free parking and more-affordable accommodations at our 75 hotels attract visitors to come here rather than attending an event in the city. And with over 700 restaurants, the best shopping in the country, and tons of family-friendly attractions, we give them even more reasons to Make It Montco and plan their stay here.”

This year’s National Dog Show is set for Saturday and Sunday, November 18-19. Tickets are available online at www.nationaldogshow.com. The dog show has been held in Philadelphia since 1879 and it has run continuously since 1933, moving to the Greater Philadelphia Expo Center at Oaks in 2009. Attendance has increased for four years in a row and now totals around 15,000 annually.

“As a non-profit with the mission of educating the public about dogs, we take very seriously the need to maintain family-friendly ticket prices,” offered Wayne Ferguson, President of the KCP. “Our attraction is wonderfully unique since the dogs are on hand all weekend long at benches for people to meet them and interact with their owners, handlers, and breeders so they can learn what kind of canine might be best-suited for their family.”

The National Dog Show is one of only three in the United States that is a “benched” show, meaning that each of the 2,000-plus dogs is in an assigned location on the Expo Center floor and people can find them by referring to the event program, which is also free. The only other benched shows in America are the Westminster Kennel Club Dog Show at Madison Square Garden in New York City and the Golden Gate Kennel Club Dog Show at the Cow Palace in San Francisco.

The National Dog Show is one of the most prominent in the world, with its history dating back to the 1800s, its location in America’s fourth-largest market, and the television exposure on NBC, which broadcasts the Saturday competition nationally on Thanksgiving Day following the Macy’s Parade. The National Dog Show Presented by Purina total audience exceeds 20 million every year and 2016’s two-hour special achieved a best-ever 5.9 Nielsen rating, higher than all but the most prominent sports and entertainment events on TV.

Rob Ritrovato, Vizion Group for the Kennel Club of Philadelphia