Rowan dean's TED Talk focuses on the Earth's past and future 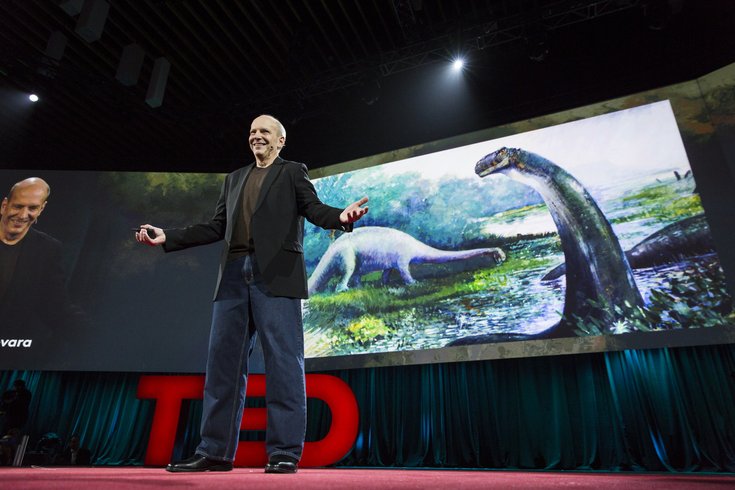 Ken Lacovara, founding dean of Rowan's School of Earth and Environment, was the first faculty member ever invited to deliver a TED Talk.

“How do you find a dinosaur? Sounds impossible, doesn’t it? It’s not.”

With that fetching opening, Rowan University paleontologist Ken Lacovara enticed his TED Talk audience to dig deeper into their knowledge and understanding of the Earth — its ancient past and its unsettled future -- during his talk earlier this semester in Vancouver.

Founding dean of Rowan’s new School of Earth and Environment, Lacovara was the first Rowan faculty member ever invited to deliver a TED Talk. His 16-minute message, which garnered a standing ovation, was delivered to a select, invited audience of the world’s biggest thinkers at the annual TED conference in February.

In celebration of Earth Day, the talk is now available to a global audience of millions here.

Each year, TED, the non-profit dedicated to “ideas worth spreading,” curates a week of TED talks by some of the world’s most inspired thinkers. Their talks strive to contribute to a deeper understanding of the world through storytelling, focusing on issues from every discipline.

Internationally known for his discovery of Dreadnoughtus schrani, a new supermassive dinosaur and the largest and most complete skeleton of a land animal ever found, Lacovara regaled his audience with stories of his discovery in Argentina.

But, Lacovara, a gifted communicator who is director of the Rowan University Fossil Park, went further, providing a lightning-fast overview of the history of the Earth’s geological history … and imploring his listeners to act to the global environmental crisis.

“The bones of Dreadnoughtus lay underground for 77 million years…Standing there, alone in the desert, it was not lost on me that the chance of any one individual entering the fossil record is vanishingly small. But the Earth is very, very old and over vast swaths of time, the improbable becomes probable. That’s the magic of the geological record.”

The study of ancient biomes, Lacovara says, particularly those of the Cretaceous Period (the heyday of the dinosaurs), relates to our emerging understanding of the global response to human-induced climate change.

“During the past 250 million years, the world was never hotter, sea level was never higher, and atmospheric carbon dioxide was never more abundant than during the Cretaceous Period,” he says.

“The rocks and fossils of this period record these environmental extremes and the resulting biotic response. By understanding paleoecological change during previous episodes of global warming, we enhance our ability to understand current changes related to the ongoing climate crisis.”

Additionally, studying the ancient past “gives us perspective and humility,” Lacovara told his TED audience.

“The dinosaurs died in the world’s fifth mass extinction, snuffed out in a cosmic accident through no fault of their own. They didn’t see it coming and they didn’t have a choice.

TED presenters attended a five-day conference, where they were among 1,350 people exploring ideas from disciplines as varied as science, business, the arts, and global policy.

Since his appearance in Vancouver, Lacovara has been invited to deliver his TED talk at conferences in Mexico and India. On April 28, he will appear on the NPR comedy show “You’re the Expert" in a live broadcast from the Philadelphia Science Festival.

This content is sponsored and created by the advertiser. It does not reflect the opinions or views of PhillyVoice.com's editorial staff.