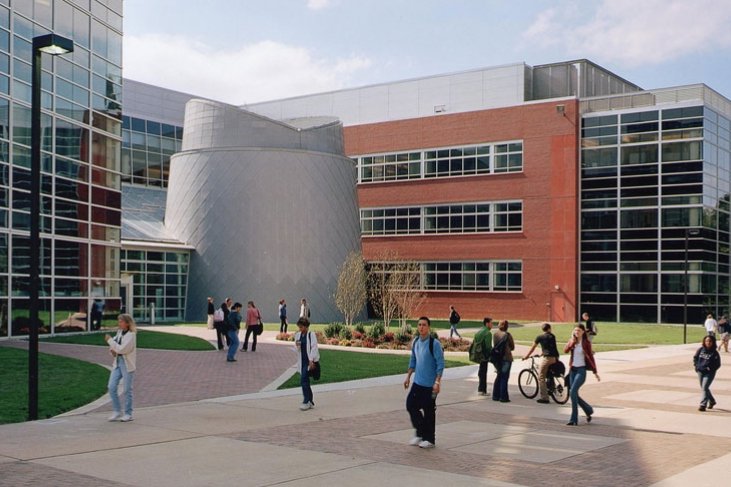 Students walk outside of the Science Hall at Rowan University.

Rowan, which was founded in 1923 as a teacher’s preparation college, is New Jersey second public comprehensive research university. Today, more than 16,000 students are enrolled in approximately 80 bachelor’s, 60 master’s, five doctoral, and two professional programs. That diversity sets it apart beyond the top 100 ranking: the university is also one of just 56 institutions in the country with accredited programs in business, education, engineering, and medicine, and just one of two that offers M.D. and D.O. medical degree programs.

The recent ranking, made by American City Business Journals, analyzed data compiled by the National Center for Education Statistics and the U.S. Census Bureau’s American Community Survey. To determine the best public colleges and universities, categories including selectivity, advancement, prestige, resources, costs and impact on the community were reviewed and ranked. This is the second year for the published report, and Rowan jumped 15 places since being named in the prior edition.

“The university’s strategy for growth and improvement is clearly paying dividends,” said Rowan University President Ali Houshmand of the ranking. “I am pleased that organizations continue to recognize our value proposition—acknowledging Rowan is a good investment for the state, business partners, and our students.”

As for what’s next for Rowan, the university is booming and boasts new developments under Houshmand’s leadership. Last year the university’s South Jersey Technology Park expanded its Virtual Reality Center to foster scientific research and private business endeavors. Construction is well under way on a $63-million building for the Rohrer College of Business and a $71-million building for the Henry M. Rowan College of Engineering--allowing both colleges to double enrollment. And, a $145-million housing complex for 1,400 students will open next fall.

As a public university, Rowan is committed to projects that reinforce its commitment to the community. Rowan has partnered with the Borough of Glassboro and private developers on the $350-million mixed-use Rowan Boulevard project, which features a Barnes & Noble bookstore, Marriott Courtyard hotel, student housing, retail, restaurants and a new urgent care facility. Also, Rowan has established a $5-million Rowan Innovation Venture Fund to help aspiring entrepreneurs throughout the region with promising business plans.

“As always, there remains much to do but it’s very gratifying to be noticed for our hard work,” Houshmand said.

Accolades are not new to Rowan. This year, USA Today’s second annual study on “Best Nationwide Colleges” ranked Rowan #303 out of 1,393.

Rowan ranked second out of 539 colleges and universities in a 2014’s “Social Mobility Index,” a study by PayScale that compared schools whose alumni leave college with relatively low debt and earn well within five years of graduating.

US News recognizes Rowan as the 3rd public University in its North-master’s category.

YOU MAY ALSO LIKE: New center at Rowan will ensure better roadways

This content is sponsored and created by the advertiser. It does not reflect the opinions or views of PhillyVoice.com's editorial staff.