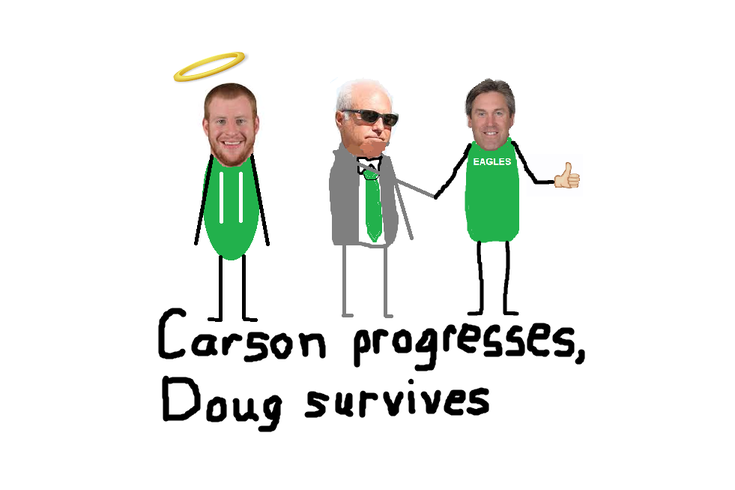 The jobs of a lot of people in the Eagles' organization are dictated by Carson Wentz's success or failure.

Earlier this week, we took a broad look at the 2017 NFL season, from a league-wide perspective, and offered up some predictions. Today we'll hone in on the Philadelphia Eagles.

This would be the final piece of our calendar year predictions we made waaaaay back in January. So far, we're 5 for 5, so we'll stick with our 6th box below:

"The expectation this year is that we have improved the team," said Jeffrey Lurie, when asked what his expectations of Doug Pederson are this season. "Who knows how the season's going to go in terms of injuries, whether chemistry comes together. Every season's a marathon. It's not determined until you really look back on it and what happened and how successful were you."

I believe that both Wentz and the team, in general, will be better in 2017, thus allowing Pederson to remain the head coach into 2018.

2) Wentz is not only improved, but significantly better

As I noted in our offensive preview this season, in the eight training camps I've covered since 2010, Wentz's camp performance this year was the best I've seen of any Eagles quarterback I've covered. That's not a high bar considering the list of names who have started at least one game for the Eagles during that span: Sam Bradford, Mark Sanchez, Nick Foles, Michael Vick, Matt Barkley, Vince Young, and Kevin Kolb.

Still, Wentz was much better than he was a year ago, particularly from an accuracy standpoint, which was his most obvious and important concern.

Add in that he'll have far better weapons in the passing game than guys like freaking Dorial Green-Beckham, not to mention a full offseason knowing that he is "the guy" instead of learning that fact a week before the season, and Wentz will be a much better position to succeed in 2017.

3) Zach Ertz puts together a full season of production

In recent seasons, Ertz has put up huge numbers late in the season, often times in garbage-time situations. Part of that is because he dealt with injuries (a core muscle in 2015, and a shoulder in 2016) early in the season, limiting his effectiveness.

Still, even if many fans would (rightfully) like to see Ertz be more physical as a runner once he has the ball in his hands, the guy caught 78 passes for 816 yards last season. With actual deep threats this season in Alshon Jeffery and Torrey Smith, the short-to-intermediate part of the field will be more open for Ertz to do damage.

I see Ertz leading the team in receptions, and possibly yards this season.

4) Alshon Jeffery won't be a 'Top 10' type of receiver, but he'll prove valuable enough to warrant a long-term contract offer

I believe concerns that Jeffery and Wentz aren't completely on the same page yet after Jeffery missed time this camp are valid, and it wouldn't surprise me to see Jeffery get off to a slow start. Still, Jeffery is very clearly the most talented weapon in the Eagles' offense, and he'll make plays on pure ability.

I also believe he'll help the other players around him by drawing attention from opposing defenses. That effect could be seen as early as Week 1. The Eagles suspect that Pro Bowl corner Josh Norman will shadow Jeffery most of the game, which could open up opportunities for Torrey Smith and Nelson Agholor against lesser corners.

Additionally, as noted above, Ertz will find more open space in the middle of the field with an actual NFL starting receiver on the outside.

Jeffery finishes with a little over 1000 yards, and 8 TDs.

I've been fooled in the past by good training camp performances, but Wendell Smallwood looked like a different guy in camp this year, when he was healthy. He barreled through defenders while also showing the burst the Eagles liked out of him coming out of West Virginia.

If Smallwood can stay healthy and at least be semi-competent in pass protection, I think he'll get on the field a lot and become the Eagles' leading rusher.

6) Derek Barnett has at least 6 sacks

Rookie edge rushers taken in the first round over the last five years averaged 3.7 sacks in their rookie seasons. Only 6 of 24 of them had at least 6 sacks. I believe Barnett will buck that trend to some degree, having an immediate impact and getting to the opposing QB at least 6 times.

7) Jordan Hicks has another great season, but gets a Pro Bowl snub

Jordan Hicks is one of the most underrated players in the NFL. In just 24 professional games (1.5 seasons), Hicks has 100 tackles, 7 INTs, 2 sacks, a forced fumble, 4 fumble recoveries, and 14 pass breakups.

Hicks' playmaking ability will continue in Year 3 in the league, but with so many edge rushers racking up stats as "linebackers," Hicks gets snubbed.

The Eagles have been among the league's best (if not the best) on special teams over the past few seasons, delivering 12 special teams touchdowns over the last three seasons, and helping steal a number of games the team would have otherwise lost. The Eagles did not look great on special teams during the preseason, which isn't terribly concerning (yet), but it will still be very difficult maintaining their recent level of excellence.

9) The Eagles aren't as healthy in 2017, and their depth becomes an issue

As we noted in our Eagles dumpster fire piece back in June, the Eagles stayed healthier than any team in the NFL last season, according to this chart via "Man-Games Lost." That's nothing new. Since Chip Kelly's arrival in Philadelphia (or perhaps more accurately, Shaun Huls' arrival), the Eagles as a team have not suffered many injuries. There certainly seems to be more than just an element of luck at play there, but certainly, luck is part of it.

I think their luck runs out there to some degree, and the Eagles are unprepared to adequately replace a lot of starters on both sides of the ball.

They earn the 6 seed on the strength of tie-breakers and are one-and-done in the first round of the playoffs.