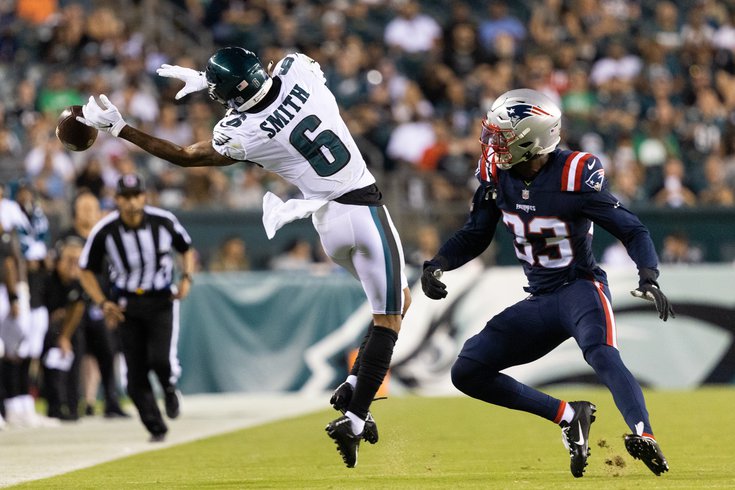 Devonta Smith was missed, several times by Joe Flacco in his Eagles debut.

You should have at least one rookie on your fantasy football roster.

If you've already drafted and have none, you should find one, or more, on waivers.

And here's why. The turnover rate in the NFL is extremely high — and with a 17-game season ahead, it will be even higher. Having fresh legs is a key asset particularly at skill positions, and there are a ton of talented rookies worth targeting in this draft. We'll break down 10 players we think are most worth rostering in just a second, but before we do that, let's take a gander at just how the rookie classes change during their freshman NFL season.

Here's a look at the 2020 rookie class, where they were drafted and where they finished after the season was all said and done:

**Was drafted relatively highly and was assumed starter before season-ending injury.

That is a ridiculously lengthy list of fantasy-relevant people. Imagine going the entire fantasy season without touching any of those players? Most have vastly improved their ADP heading into their sophomore year.

Finding the next Justin Jefferson can of course be dumb luck. You either need to waste valuable spots on your bench on a whim, or you have to wait until a player starts to break out and either get lucky on waivers or spend a ransom from your waiver pool of cash.

Regardless, based on the last two years alone, fantasy teams should all include at least one rookie flier every single season.

Here's the 2019 rookie class, and where they would wind up being drafted one year later — a direct reflection of their unexpectedly good play that season:

How many people in your league two years ago picked up A.J. Brown off waivers, or took a stab at Kyler Murray in the 14th round and wound up making fantasy playoff runs?

If you have room to spare, now is the time to act. A player below will slowly start to round into NFL-playing form or could be forced into action due to an injured player. Getting in on the ground floor could be the difference between making a title run or missing the playoffs in your fantasy league. And — if your league has keepers — nabbing a player off the wire who breaks out midseason (like Nick Chubb last year, who jumped from the 110th pick to the 8th in one season), could give you incredible value in your 2020 draft.

This year will be no different. We are going to skip over some obvious early picks like Kyle Pitts and Ja'Marr Chase, who will be on many people's radars. Target these 10 rookies, some of whom you haven't heard of yet:

The RB1 in Denver is Melvin Gordon who is ripe for getting Wally Pipped. Williams is the No. 2 and could seize the starting role. He should be owned in every league.

Lawrence is a borderline top 12 QB in fantasy, but he has really good weapons in Jacksonville and the legs to be a two-way QB. He's more than worth being a second rostered QB.

Smith is WR1 on the Eagles depth chart. From a simple opportunity standpoint, he could be a home-run draft pick.

These three quarterbacks were first round picks and are probably not going to be drafted in your league. At least one of them should become fantasy relevant by midseason.

The hype round Moore is everywhere and chances are someone in your draft will overpay for the right to cash in. But if they do, they could have another Justin Jefferson on your hands.

Niners' starter Raheem Mostert is banged up and their rookie RB appears to be their RB2. He has gotten first team reps in camp and could contribute right away.

The top two WR on Detroit's depth chart are Tyrell Williams and Kalif Raymond. Who? Jared Goff has to throw to someone and the ultra-talented rookie St. Brown could wind up their top target after a few short weeks.

We are getting a little deep here but Palmer is the third wideout on the Chargers depth chart and Justin Herbert loves to air it out. He could be on the fantasy fringes a few weeks into the season.

The Patriots and Bill Belichick are unpredictable with how they use their running backs, but Stevens has had a monster preseason and the team traded away Sony Michel, which could be a vote of confidence for the rookie.

This is a very deep reach, but Hill has impressed this preseason and could be the next man up if something happens to Aaron Jones — and could get some RB2 reps. Keep an eye on him on waivers.

Yes, we know it is a lot riskier to take an unknown rookie than an established fantasy contributor. But padding the last few picks on your roster with big swings on rookies could be a lot more valuable than picking Benny Snell or Anthony Miller to warm your bench.