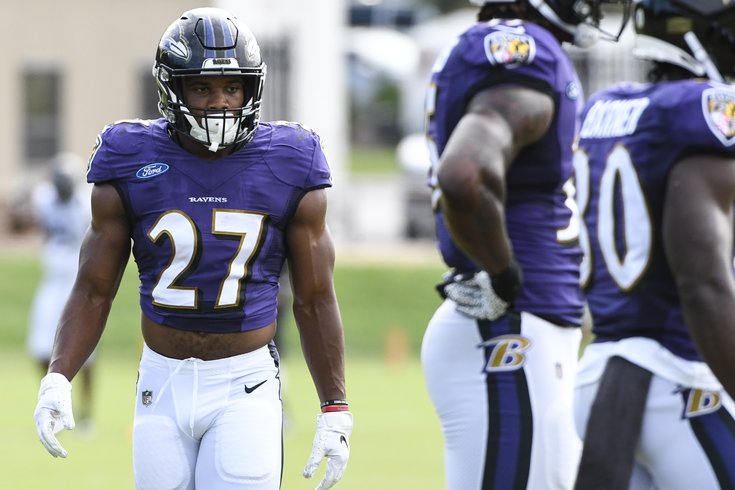 J.K. Dobbins' injury in the preseason could cost him the regular season.

As we inch closer to the start of the 2021 NFL season, a few star players have already been lost to injury, while others are fighting tooth and nail to be ready for kickoff in three weeks.

With fantasy drafts happening all over the place this week, it's worth being well-versed as to who is out to start the year, who could be out the start the year, and who looks to be on pace to play in Week 1.

While there have been dozens of fantasy relevant players sitting out final preseason games across the league, we are going to focus on players from whom there has been actual injury news over the last few days. Here's the latest on some key fantasy football draftees:

Aside from Lamar Jackson, you couldn't pick a worse offensive player to get seriously hurt on the Ravens than Dobbins, the team's soon to be sophomore running back who was carted off with a knee injury in a preseason win Saturday.

Dobbins is done for the year:

An MRI today confirmed that Ravens’ RB J.K. Dobbins, one of the top young running backs in the game, suffered a season-ending torn ACL, per source.

Gus Edwards is the next man up but he's not a complete back, he's a power back. There is a huge question mark as to whether Justice Hill (fresh off his own injury) or Ty’Son Williams or Nate McCrary will get carries, or if they will bring in someone via trade or free agency. Definitely target Edwards and keep an eye on waivers to snatch whomever winds up getting RB2 reps.

Etienne joins Cam Akers as potential stud running backs who will spend 2021 on the IR. He was shut down last week with a foot injury that could cost him the season, or at least eight weeks. James Robinson becomes even more valuable now as the Jags featured back.

Henderson had a minor thumb injury that he appears to be overcoming, but his assumed RB1 reps took a hit when the Rams traded for Patriots running back Sony Michel. It will be unclear until the season really kicks off how the snaps will be divvied up, so drafters of either player should do so with caution.

Mostert was seen reportedly wincing with pain in his back a few practices ago and has been out since, with Trey Sermon getting his reps on the field. This back injury is a legit threat to cost him some time so keep an eye on his status over the next few weeks.

There is a pretty big red flag in Detroit surrounding Swift, and fantasy owners should beware. From head coach Dan Campbell regarding his conditioning and readiness to contribute: "We don’t know if he’s gonna be there. We don’t know, even if he is, how much we’re going to get out of him.” Target Jamaal Williams not Swift.

Prescott is slowly emerging from his shoulder injury, with reports saying he's now able to safely throw the ball 25 yards down field. It seems like he will be a healthy fantasy play.

Lamb — who is fully vaccinated — was added to the NFL's COVID list. We don't know if he tested positive or what, but with the season still three weeks out it seems like he'll be fine. Still, it's worth monitoring.

Tannehill is another fantasy target now on the COVID list. Like Lamb, with so much time left before the season starts he should be ok — but draft with caution.

Typically, a top wide receiver dealing with a hamstring issue after the final preseason game would be cause for alarm, but with the schedule slated to have two weeks without games this season before Week 1 begins the second week of September, Aiyuk's ailment could be fully healed by the Niners' opener. Keep an eye on his status when you draft.

A leg injury has limited him throughout camp and has kept him out of the preseason but reports suggest it's just precautionary and that his injury issues are minor. Hockenson could be the No. 1 receiving target for Jared Goff and the Lions.

We know that Jameis Winston is the starter at QB in New Orleans, but we don't know who his starting tight end will be, as Trautman will miss a few weeks with an ankle injury. He may be a waiver wire pick up once he's fully healthy.

It was reported a few weeks ago that a shoulder injury would cost Henry some time, and it appears that time has been served as the tight end is back on the field for 7-on-7 drills.

Both of the above wideouts — who could be key targets for Trevor Lawrence, have minor injuries and are expected to be full go for Week 1.