10 players who impressed during Senior Bowl week, five who didn't 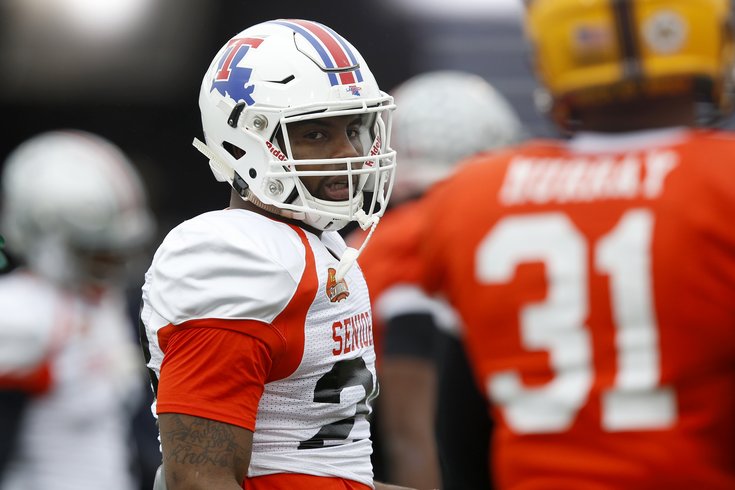 The Senior Bowl will air today at 2:30 p.m. EST today on NFL Network. It should be of particular interest to Eagles fans, since the Eagles have drafted 24 Senior Bowl participants since 2010, most in the NFL. If history serves as any indication, several players competing in the game today will become newly minted Eagles in April.

PhillyVoice was down in Mobile, Alabama all week observing the week of practices. Here are 10 players who impressed, and five who did not.

1) Sheldon Rankins, DT, Louisville: Rankins displayed excellent burst and quickness from his DT spot, drawing some (absurd) comparisons to Rams DT Aaron Donald. In 2014, Donald was clearly the best player on the field in Senior Bowl practices, as he was unblockable. The only player who even had a chance to block him was another eventual Pro Bowl player, Cowboys OG Zack Martin. Rankins wasn't on that level, but he toasted his share of interior offensive linemen with his impressive quickness and repertoire of pass rush moves, including a spin move that ate up several blockers.

2) Carson Wentz, QB, North Dakota State: Wentz came into Mobile with all kinds of hype, and he did not disappoint. Wentz showcased his strong arm all week, making deep sideline throws with ease, and displaying better accuracy than anticipated. This was my fifth week of Senior Bowl practices, and Wentz was the best quarterback I've seen down in Mobile. I'd be surprised if he makes it out of the top 10.

3) Kenneth Dixon, RB, Louisiana Tech: Dixon is really, really good, especially as a receiver out of the backfield. He'll enter the NFL a more polished receiver than most of the running backs already collecting paychecks. One of the better receiving running backs during the week of Senior Bowl practices last year was the Cardinals' David Johnson, who had 36 catches for 457 yards and 4 TDs as a rookie. I felt that Dixon was better. Safeties and linebackers couldn't cover Dixon, and often looked silly trying. Dixon is going to help some team immediately as a rookie.

4) Noah Spence, DE, Eastern Kentucky: Spence got more and more dominant as the week progressed, displaying a myriad of pass rush moves, and disrupting in the backfield with regularity. If teams are comfortable with his character concerns, he'll easily be a first round pick, and could be a steal if he slips.

5) Cody Whitehair, OG, Kansas State: In a group of offensive linemen who mostly struggled against talented pass rushers all week, Whitehair was a rare exception, and is getting buzz as the likely first guard taken in the 2016 NFL Draft.

6) Jacoby Brissett, QB, NC State: Brissett made a number of spectacular plays throughout his college career, but struggled with consistency, due mostly to his penchant for holding onto the football too long. At the week of Senior Bowl practices, he was much more decisive than he showed at times in games, and threw the ball with more zip than I thought he had.

7) Jarran Reed, DT, Alabama: There are some players who get to the NFL who are just "men" from Day 1. That was Fletcher Cox when he arrived with the Eagles in 2012, and it'll be Reed when he lands with whatever team that drafts him. Reed showed the ability to easily shed blocks by offensive linemen who couldn't match his brute strength.

8) KJ Dillon, S, West Virginia: Dillon wasn't even on my radar heading into the week, but he showed impressive cover skills and had a few nice pops on running backs. Dillon played opposite stud Karl Joseph on the back end of WVU's defense and is therefore forgotten by some, but he had a good week of practices.

9) Jay Lee, WR, Baylor: Lee was perhaps the third best wide receiver on his own team at Baylor behind Corey Coleman and KD Cannon, but he stood out in Mobile, making several impressive catches, including a one-hander near the sideline. Lee was as active as any receiver this week.

10) Sterling Shepard, WR, Oklahoma: While Lee was the most active receiver this week, Shepard was the most explosive, getting behind the defense for a number of deep completions, and showing YAC skills after he had the ball in his hands.

1) Eric Murray, CB, Minnesota: If this were a wrestling all-star week of practices, Murray would have been the MVP. Murray grabbed, held, and even tackled receivers trying to run their routes. On one occasion, he was mugging Rutgers WR Leonte Carroo so badly that the Cowboys staff momentarily stopped the drill, admonished Murray, and had Carroo and Murray re-do their rep. Without being able to grab and pull at Carroo, Murray got smoked down the sideline for an easy TD.

2) Spencer Drango, OT/OG, Baylor: Drango got eaten alive this week at tackle. If there was any doubt he'd have to move inside to guard in the pros, there's no doubt now. The problem for Drango is that he didn't play any guard at Baylor, so even that will be a projection for some teams.

3) Bryce Williams, TE, East Carolina: Williams was a prospect I really liked heading into this week, and I even had him as a fifth round pick in my Eagles only mock draft 1.0 a few weeks ago. In Mobile, all he did all week was drop very catchable passes.

4) Dak Prescott, QB, Mississippi State: Prescott had a rough week, often throwing low, negating any chance for his receivers to get yards after the catch, or just missing them entirely. I believe he likely hurt his stock considerably.

5) Connor Cook, QB, Michigan State: Cook was one of three players who declined their invites, along with DE DeForest Buckner of Oregon and C Ryan Kelly of Alabama. A guy like Buckner is going to be a top-10 pick. He can really only hurt his value, so it makes sense for him to skip. As for Cook, there is a philosophical debate on missing practices.

On the one hand, Dak Prescott competed and likely hurt his draft stock. On the other hand, by not competing, it can be viewed as a signal that you think you're too good to compete there, or worse, that you're very aware of your flaws and think you could be exposed. In my opinion, Cook made a bad decision by skipping. Most evaluators have him well behind other quarterbacks like Cal's Jared Goff, Memphis' Paxton Lynch, and North Dakota State's Carson Wentz. Some even have him slotted behind Penn State's Christian Hackenberg. Not competing here is going to be a bright red flag for many teams.

Cook didn't impress, because, well, he wasn't there.