Philly mascot wit attitude: 'You can't get better cheesesteaks anywhere in the world'

Cheesy talks about misguided polls, the best steaks in town and whether hot dogs are sandwiches 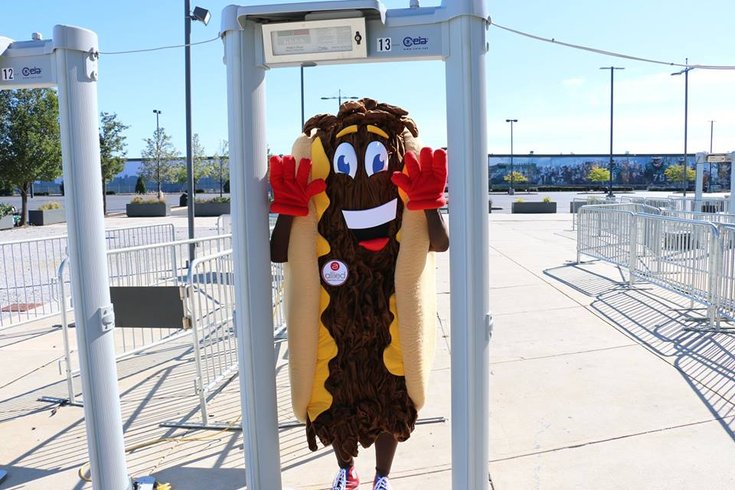 'Cheesy the Cheesesteak' will be at Citizen's Bank Park on Saturday for the 3rd annual Philly Cheesesteak and Food Fest.

When the third annual Philly Cheesesteak & Food Fest 2017 returns to Citizen’s Bank Park on Saturday, folks will do more than taste the city’s trademarked cuisine, sip craft beers, walk the base paths or chill in the Phillies dugout.

They will also have the opportunity to meet “Cheesy the Cheesesteak,” the super-sized mascot of Philly’s renowned offering.

This couldn’t happen at a more important time, what with Philly getting snubbed in an “America’s Best Cheesesteak” listicle on some website called “The Daily Meal.”

That gastrobomination of reality comes a year after Pittsburgh cheated its way to victory in a likeminded USA Today poll.

Obviously, these are matters of great importance regarding the celebration, and retention, of civic pride.

So, as he made his final preparations for Saturday’s glorious event, we set out to catch up with the trademarked Cheesy the Cheesesteak to talk about those snubs and much more.

With unwritten rules of the mascot life being what they are, Cheesy does not speak directly with the media, per festival organizer Dave Feldman.

Using Feldman as a go-between on Thursday morning, however, we were able to get our queries straight to the cheesesteak source who weighed in on these issues when he was off the clock.

What follows are the results of that question-and-answer session.

I have a ton of fun with it. Just the other day, I had an appearance with the Phillie Phanatic and we have a blast with it. The cheesesteak fest has been just like that over the years.

"There's just no way somewhere else has better steaks than Philly." --Cheesy the Cheesesteak

What is the key to a quality cheesesteak?

The key is the right kind of steak. If you like onions, you can go wit or without. Also important: You have to have the right bread. The bread is so important and that's why Philadelphia cheesesteaks are the best in the world.

What are emblems of a bad cheesesteak?

You can overcook them, put too much cheese on them. Like I just mentioned, bread is a big part of cheesesteak quality. It was Steve's Prince of Steaks where I saw some of the scientific ways to use bread with a cheesesteak, the amount of holes they put in the roll to absorb grease. It was pretty cool to see.

Do you get annoyed that TV stations always use those cheesesteak-prep bumpers when returning to live sports coverage of Philly games?

It's a little annoying, but that's really about people not knowing how cheesesteaks are made when they're not from Philly, or they're cooking Steak Ums at home. In Philly, we're used to seeing it, but when people from outside the area see that, they realize, 'Oh, I didn't know it was one piece of steak.' So, it's good in that sense.

Where is the best cheesesteak in Philly?

I can't give you that answer. There are so many great steaks all over the city.

Can you get good cheesesteaks outside the Delaware Valley?

I think it's hard to get a great cheesesteak outside the Delaware Valley. As I alluded to earlier, bread is such an important part of it, and you just can't get the bread outside our area. The meat can be the same. It can be flown in to wherever it is. But you can't get the bread.

What do you make of the backlash to polls that claimed the best cheesesteaks in America don’t actually come from Philadelphia when, in fact, they do?

I think that could be happening because people in other areas are just starting to taste quality cheesesteaks, and nowadays, others can make them and make them pretty well.

But, Philadelphia is the originator of the cheesesteak and you can't get better cheesesteaks anywhere in the world than Philadelphia. There's just no way somewhere else has better steaks than Philly.

I've never gotten anything like that. I've never had anything vulgar thrown at me, unless people were really drunk, I guess. The only thing I got was that I looked like a hot dog. I mean, I guess I kinda of do? But, I'm in a top-quality outfit. I look like a cheesesteak.

And finally, is a hot dog a sandwich?

Hmm. That's a good question. It'd have to be, right? You have meat between two pieces of bread. Well, it's not like two separate slices of bread, but the bun is like that. Yes, I'd have to say a hot dog is a sandwich.