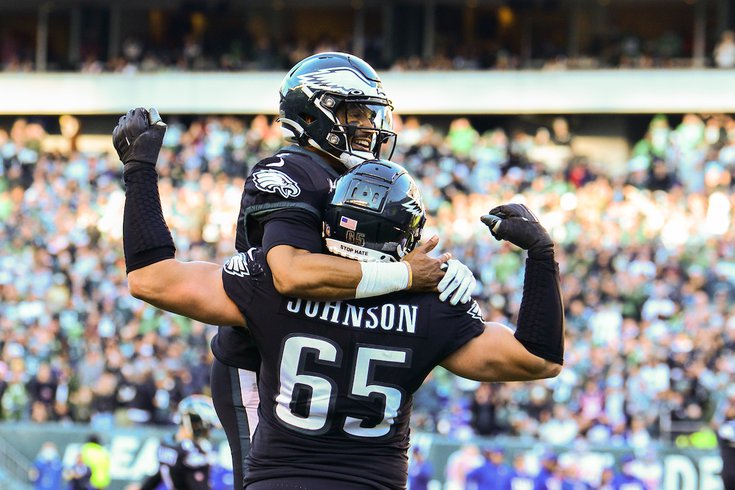 Last Thursday, we listed 10 reasons why the Philadelphia Eagles' 2022 season could go badly as part of our Dumpster Fire series. If I'm being honest, it was difficult coming up with 10 reasons, as I had to resort to picking on the poor punter.

Here we'll do the opposite, as we'll take a look at 10 reasons why the Eagles could be Super Bowl contenders.

1) The offensive line is elite

There are some who believe the Eagles have the best offensive line in the NFL. In 2021, it was by far the biggest reason the Eagles won nine games and made the playoffs. As you know, the starters currently look like this:

Mailata should have made the Pro Bowl in 2021, but he was snubbed. Both he and Dickerson could reasonably take their games to the next level in 2022. Meanwhile, Kelce and Johnson remain star players. Seumalo is the only starter along the line who is not considered either a plus starter or a long-term building block. Still, he remains a competent starter, but one with durability concerns.

If there are any questions as to whether the Eagles' starting five is the best in the NFL, it's their depth that probably pushes them ahead of any other teams that are considered close. Guys like Andre Dillard, Jack Driscoll, Cam Jurgens, Sua Opeta, and Le'Raven Clark could all potentially start on some other OL-challenged teams around the league, while other guys like Jack Anderson and Kayode Awosika are worth further development.

2) The wide receivers are finally a strength again

DeVonta Smith, A.J. Brown and Quez Watkins are receivers who can make plays at all three levels of the defense, and they all go about it in different ways.

It should be fun watching the top three guys operating on the field at the same time.

3) The interior of the defensive line is stacked

The Eagles go four deep along the interior of their defensive line. It's a really nice blend of veteran experience and talented youth.

The Eagles will have the opportunity to heavily rotate that group and keep them fresh both through games and throughout the season.

4) The pass rush should be significantly improved

The Eagles finished with just 29 sacks in 2021, which was second-worst in the NFL. And so, they added Haason Reddick, who has 23.5 sacks over his last two seasons. He will give the Eagles more juice off the edge. The Eagles will also be getting Brandon Graham back from an Achilles injury suffered Week 2 during the 2021 regular season, while Josh Sweat seems to be entering his prime.

5) The corners are actually good now

After an underwhelming first season in Philly in 2020, Darius Slay made some huge plays in 2021 that helped the Eagles win games against the Panthers, Broncos and Saints. He also did not get roasted in any games like he did against Davante Adams and DK Metcalf the previous season, all while (mostly) trailing the opposing team's best receiver all season.

The Eagles also added James Bradberry, who could be some teams' No. 1 corner. He was arguably the Giants' best defender the last two seasons, but the team cut him due to salary cap issues.

Avonte Maddox was much better in 2021 after a move from outside corner to the slot, where his skill set is better suited.

And then the Eagles have a slew of young corners that they have been collecting for more than a year, like Zech McPhearson, Tay Gowan, Josiah Scott, Kary Vincent, Mac McCain, Josh Jobe, Mario Goodrich and Jimmy Moreland. Obviously, a bunch of those guys won't even make the team, but the Eagles' strategy of accumulating a lot of young corners and developing them in the background while seeing if one or two might become players is a good idea.

The Eagles have gotten some pretty crappy linebacker play for a while now, but they were fortunate on two fronts this offseason:

The Eagles have forever undervalued the linebacker position, refusing to spend premium financial and/or draft resources on it. That philosophy continued this offseason, but White and Dean offer more potential than any of the team's other recent attempts to solve the position in the bargain bin.

And if for whatever reason White or Dean don't pan out like the Eagles hope, they still have T.J. Edwards, a player who is not athletically gifted but knows how to play the position and can already be counted on for competent play.

After the Eagles traded Zach Ertz, Goedert averaged 4.3 catches for 64 yards per game in 11 games the rest of the season. Extrapolate that over a 17-game season and you get 73 catches for 1091 yards. It's Goedert's efficiency in 2021 that was particularly impressive. He averaged 10.9 yards per target on the season, which was fifth-best in the NFL among all players, and first among tight ends. He is also a good blocker.

With a quality receiving corps finally in place, Goedert may not get enough targets to break the 1000-yard pace he set after Ertz's departure last season, but when he gets his opportunities the field should be a little more open for him.

8) The coaching staff has continuity

The Eagles' staff was one of the youngest in the NFL a season ago, if not the youngest. They were very much a work in progress in 2021, but they weathered the storm and beat up on some bad teams on their way to the playoffs.

In 2022, Nick Sirianni and Jonathan Gannon will have a year under their belts as the head coach and defensive coordinator, respectively, and the Eagles also kept their staff of assistants in place. Players will know exactly what is expected of them in 2022, and the young assistants who are entering Year 2 in Philly should be more prepared for their jobs.

9) The NFC is terrible

This is a pretty big reason!

One could make a compelling case for the Bears, Panthers, Falcons, Giants, Seahawks, or Lions picking first in the 2023 NFL Draft. There are six truly bad teams that represent more than a third of the conference.

The Commanders aren't going anywhere as long as Daniel Snyder is the owner.

The Saints and 49ers have quarterback concerns.

The Cardinals and Vikings tend to fold in games that matter. Same goes for the Cowboys, who objectively got worse this offseason.

That leaves the Packers, Buccaneers, and Rams as the only teams in the NFC that are clearly better than the Eagles right now, at least on paper.

In our Eagles Dumpster Fire piece, we noted that Hurts could regress in 2022, which in my view is an underdiscussed possibility. It feels a lot like it's just assumed by those who follow the Eagles that he will improve in Year 3. (I do think it is more likely that he takes a step forward than backward, for the record.)

We all know what Hurts is as a player by now. He's a smart, tough leader who can make plays with his feet, but his general throwing ability and the speed of his progressions from the pocket must improve substantially.

And if Hurts can improve significantly, he has everything around him in the Eagles' offense to succeed.