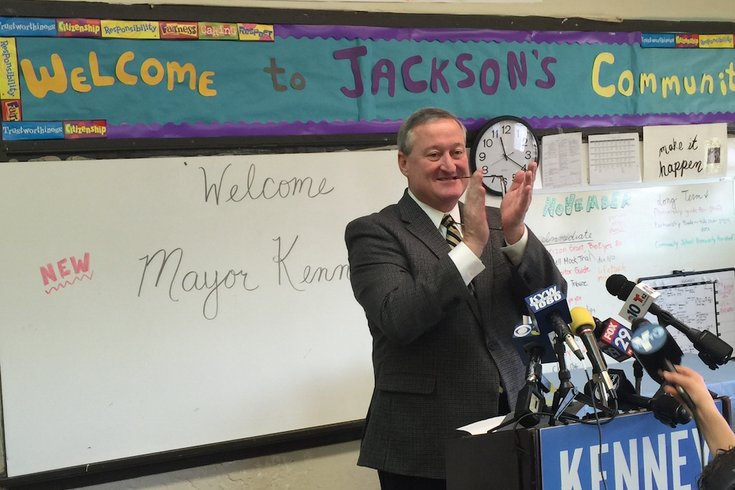 Mayor-Elect Jim Kenney talked about an inclusive mayoral-transition plan and fielded questions from the press at Andrew Jackson School in South Philadelphia the morning after Election Day.

Philadelphia Mayor-Elect Jim Kenney on Wednesday publicly launched a City Hall transition process that actually started months ago under the veil of sorta-secrecy.

During his first public appearance after a historically large Tuesday night victory – he outpointed Republican candidate Melissa Murray Bailey by roughly 72 percent of the vote – Kenney announced a process that will be “focused on turning ideas into actual policy as well as hiring the best people to carry out those policies."

Translation: It’s time to turn campaign promises into tangible advances in the city.

“The policies we create during this period will be based on ideas collected from every neighborhood,” he said at South Philadelphia’s Andrew Jackson School where, in March, he donned a Dr. Seuss hat and read to kindergartners.

Transition team members will be announced on Thursday, but the KenneyForPhiladelphia.com website is already live, complete with an “Apply For Jobs” tab.

"I’ve talked to the potential [police] commissioner and said I want people on the [mayoral security] detail that don’t mind riding public transit. I think public transit, the Reading Terminal Market and just being a normal person realizing you put your pants on every day the same as everyone else … you can stay connected." --Mayor-Elect Jim Kenney

They will not only seek input from policy experts but from “Philadelphia families” through town-hall events across the city.

From there, results will be presented publicly as a “formal transition report” in January, Kenney said, inviting “Philadelphians to share their ideas about how we can create a better city for everyone.”

That announcement was ostensibly the reason for Wednesday morning’s press conference, at which he said he expects to announce major hires by Thanksgiving.

But in a room filled with reporters, Kenney soon faced a variety of questions on an array of issues.

On funding his ambitious, $60 million pre-K plan, for which he’s targeted a Sept. 2016 start: “We’re going to get the money. We’re going to find the money within our current budget and also go out through philanthropy, corporations and whoever else wants to help. We’re going to cobble this together and make it happen.” He then noted that conversations have started with pre-K providers and taking a look at vacant school buildings in advance of his taking office. 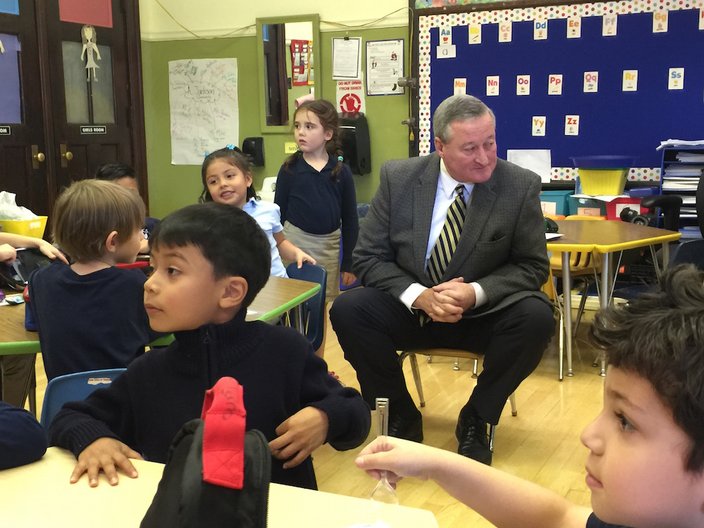 On taxes: “The key to being a mayor in a big city is balancing a reduction in taxes with the level of service you provide. We could have a low tax rate and terrible service provision and people won’t want to live here either. As the economy ebbs and flows, we will figure out ways of increasing the tax reductions, but I’m not promising any specific tax reductions at the moment.”

On winning with a historically large number of the vote despite a historically low turnout for an open-seat election: “I don’t understand why people don’t vote. … People who say to me ‘I don’t vote because it doesn’t count’ [are] a self-fulfilling prophesy. When I look back at our country’s history … people gave their lives in this country for the right to vote. To dishonor their memory but not voting, it’s incomprehensible to me.”

On preparing to take office with the possibility that a state budget may not yet be in place: “That’s a possibility. I hope it’s not the case. I have faith in Gov. [Tom] Wolf and I also have faith in the legislature. I think they will come together, but it’s not my role to criticize or complain about what they’re doing.”

On reversing the big promises, little-results ‘Negadelphia’ mindset: “I’m not coming in with big promises. I’m coming in with promises that can be achieved. I know my relationship with [City] Council and Council President [Darrell] Clarke is excellent. I recognize that they are individually elected officials who care about this city, want this city to move forward and they have ideas, they have value, and we need to put that all together into a team.”

On evolving from his former “hot-head” reputation: “Age and maturity and people I’ve come in contact with in my life and profession.”

On how he plans to stay connected to the community once he takes office: “Ride the subway. I use public transit all the time. [Pulls token from pocket as proof]. It’s weird. Since I was nominated in May, people on the subway stop me and say ‘what are you doing on the subway?’ I’m going to work! I’ve talked to the potential [police] commissioner and said I want people on the [mayoral security] detail that don’t mind riding public transit. I think public transit, the Reading Terminal Market and just being a normal person realizing you put your pants on every day the same as everyone else … you can stay connected. I come from an area – Second Street, Mummers – where you can’t get too big of a head. When you do, they will call you out. Every now and then, I need to go down there when I think I’m getting too full of myself. One of the strengths I bring to this office: I am not different than anybody else, and I don’t think I am.”

On the LGBT ballot question passing: “I would have done that anyway, but I’m glad the voters confirmed there’s a reason, a need, for an office like that. … One group of people in our city that’s been totally ignored is the ‘T’ in LGBT [transgender], and the T has been silent. We are going to address the issues going forward. We’ve had people murdered because they’re transgendered, people who feel disrespected and out of the circle of our community, and we want to bring them in and make sure they know that we love them and care about them being full Philadelphians.”

On whether he’ll be naming Richard Ross as successor to Police Commissioner Charles Ramsey: “I’m not prepared to say anything about it today but, I mean, if you just connect the dots, y’know. We’re not looking outside the department. Commissioner Ramsey has made his recommendation clear. Deputy Commissioner [Kevin] Bethel has decided to move on. He an awesome person and was, and would have been, in consideration. So, connect the dots.”

On police/community relations: “When I was a kid growing up, my parents always told me, ‘If you ever have a problem, if you’re ever in a neighborhood where you feel uncomfortable or afraid, find a police officer, he’ll help you. That’s not the narrative that every neighborhood parent tells their children [today]. My aspirational goal is to have every parent feel comfortable enough to tell their kids to find a police officer if you need help.”

On what every-day staffers (i.e. not department heads) should expect for their futures: “We are sending out a very nice email to those folks who wish to say. This [Nutter] administration has done a great job in many areas and there are some very talented people currently working in the government who might want to stay on, might want to move to another position. We will give them the opportunity to include their resumes in our process.”