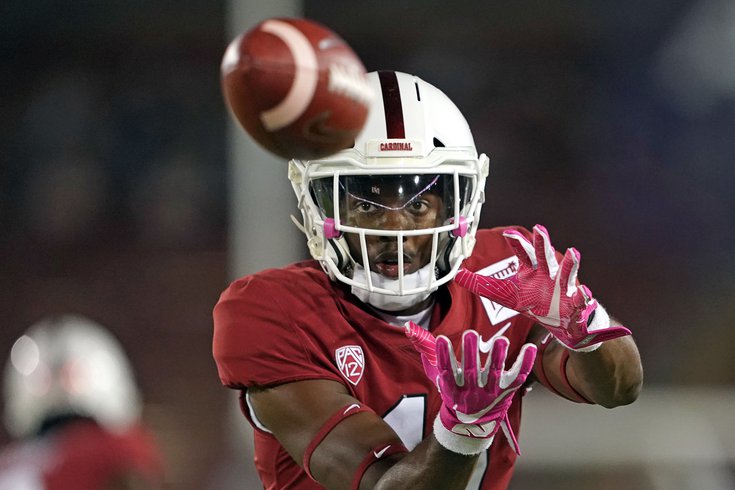 Paulson Adebo is a talented player who fills a need for the Eagles, at cornerback.

Let's just get right to them.

• Jabril Cox, LB, LSU: Cox was a high school quarterback who transitioned to linebacker at North Dakota State, and he was a very productive one in three years there, racking up 258 tackles, 14 sacks, six INTs, and 12 pass breakups. He looked like the most impressive athlete on the field at NDSU. Cox transferred to LSU for the 2020 season, where he continued to make plays. In 10 games, he had 58 tackles (6.5 for loss), a sack, 3 INTs (1 pick-six), and five pass breakups. He is a long, speedy linebacker with coverage skills whose game should translate to the next level.

• Pete Werner, LB, Ohio State: Werner does not have particularly impressive numbers for a potential Day 2 linebacker, but he projects as an athletic three-down player in the NFL with the size and strength to play the run, and athleticism to cover tight ends and running backs.

• Chazz Surratt, LB, North Carolina: Surratt is an interesting prospect who moved from quarterback to linebacker. In his first full season at LB in 2019, Surratt racked up 115 tackles (15 for loss), 6.5 sacks, an INT, and a forced fumble. In 11 games in 2020, he had 91 tackles, six sacks, and three pass breakups.

• Carlos Basham, DE, Wake Forest: In 2019, Basham had 57 tackles (18 for loss), 10 sacks, and three forced fumbles for Wake. He followed that up with five sacks and four(!) forced fumbles in just six games in 2020. At 6'3, 272, Basham is a thick, powerful rusher who gives off some Brandon Graham vibes, who plays on both sides, can also shift inside on obvious passing downs, and is a good run stopper. He also has a good repertoire of pass rush moves, and he's a high-energy player.

• Ronnie Perkins, DE, Oklahoma: Perkins finished his OU career strongly, collecting 5.5 sacks and 10.5 TFLs in 6 games. He has some juice, he plays hard, and he's good against the run, despite being listed at just 253 pounds.

• Daviyon Nixon, DT, Iowa: Nixon is quick, powerful, instinctive, and productive. On the season (in 8 games), Nixon had 45 tackles, 5.5 sacks, 13.5 tackles for loss, and a forced fumble. Intriguing Round 3 option in an otherwise bad DT class.

• Aaron Robinson, CB, UCF: Robinson played inside and outside for UCF. Only one career INT, but is thought of as a tough, versatile player.

• Terrace Marshall, WR, LSU: Marshall has ideal size (6'2, 205), and would probably make the most sense from a needs perspective as an X receiver to pair with Jalen Reagor as the Z. He was the third receiver in the pecking order at LSU behind Ja'Marr Chase and Justin Jefferson in LSU's offense during their championship run in 2019, but he was still productive in his own right, catching 13 touchdowns as a sophomore. In 2020, with Jefferson off to the NFL and Chase opting out for the season, Marshall had a chance to shine, which he did, catching 48 passes for 731 yards (15.2 YPC) and 10 TDs in seven games. He was averaging about seven catches for 104 yards and 1.4 TDs per game, when he too decided to opt out for the rest of the season to prepare for the NFL draft. He is a big, strong receiver with good speed for a guy his size who can beat press coverage, win contested catches, and operate both from the outside and in the slot. He also has very good hands, and rarely drops passes.

• Michael Carter, RB, North Carolina: Carter averaged 8.0 yards per carry as a senior, carrying 156 times for 1256 yards and 9 TDs. He was also a productive receiver out of the backfield, as he had 82 career catches for 656 yards and 6 TDs. He also returned kicks, though he didn't have any return TDs. Despite being a part of UNC's offense for four years, Carter doesn't have a ton of mileage on him, as he has fewer than 600 touches over his four-year college career.