What they're saying: DeVonta Smith is a beast; Eagles have Giants complaining again 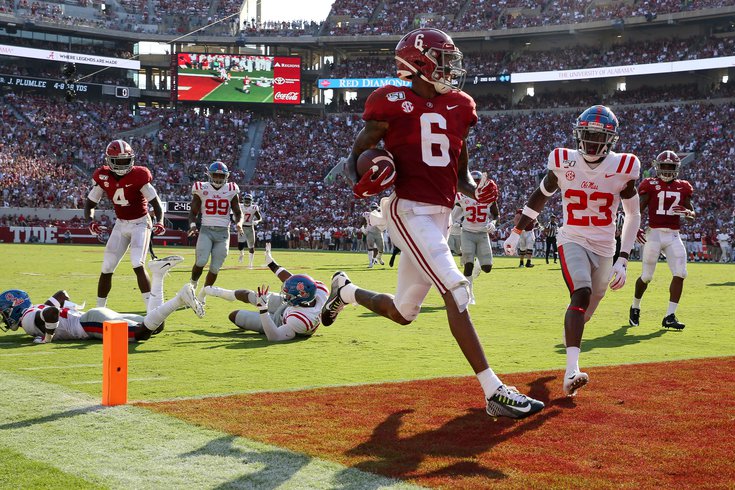 This time last year, Eagles fans were scratching their wounds.

Not only where they trying to make sense of, and get hyped about, the peculiar choice of Jalen Reagor in the first round with other options believed (rightly) to be better still on the board — but they also had to figure out why on God's green earth Howie Roseman decided to take a second round quarterback, in Jalen Hurts.

Whether or not draft night 2020 was the straw that would eventually break the camel's back is a subject open to ample debate, but it certainly did set in motion events that would lead to Carson Wentz' exodus from Philadelphia.

About an hour into the 2021 draft, things were feeling similarly grim. Three of the players Eagles fans were hoping for were off the board, with the Eagles slated to pick following hated division rivals the Cowboys and Giants. It seemed like the perfect recipe for disaster. One of those teams — probably the Giants — would take DeVonta Smith, and Philly would take someone no one ever heard of at 12.

But then a miracle. The Eagles swapped picks with Dallas (throwing in a third-round pick for their trouble) and Smith was theirs.

Eagles fans went to sleep Thursday night feeling optimistic, possibly for the first time in over a year.

With a Heisman Trophy winner from Alabama now on the team, things are looking up. And it's from there that we'll dive into our latest version of What They're Saying:

Let's start by getting you amped up. If you haven't already watched the bevy of incredible Smith highlights — some of them are right here — Staples' words describing the former Alabama wideout surely will.

Even after he spent three years destroying college defenses, DeVonta Smith still seemed to surprise opponents as he zoomed toward a Heisman Trophy and a national title as a senior. We could saddle Smith with pejoratives like “slight” or “scrawny,” but after Smith averaged 16.9 yards a catch and caught 46 career touchdown passes — including 23 as a senior — let’s bulk up those adjectives to “sinewy” or “efficiently muscled.” Or maybe we should just let Smith’s nickname explain. Not Smitty, which is what Smith’s Alabama teammates called him. The other nickname.

Smith stretches about 170 pounds across a 6-foot-1 frame. That didn’t stop him from carving up defenses at nearly every point on the field. According to Pro Football Focus, Smith ranked No. 1 in the nation in deep yards (589), No. 1 in the nation in screen yards (304) and No. 5 in the nation in slot yards (863) during his Heisman season in 2020. He did this by blending speed with ridiculously precise route running that bought him even more time and space as defenders struggled to change directions as quickly or efficiently as Smith.  [The Athletic]

How long do we have to wait for the season to start?

The stakes probably could't have been higher for Howie Roseman, the Eagles general manager who has gotten most of the blame for the mess the team currently finds itself in. He needed to hit a home run Thursday night and somehow he did. Whether or not the draft — which continues Friday and Saturday — will get him out of the doghouse is anyone's guess. But for one night, he got the monkey off his back. Here's more on Roseman's big night from Dave Zangaro:

With those three players off the board, the other top option for the Eagles was Smith and they recognized that he wasn’t going to get past the Giants at No. 11. So the Eagles pulled off a trade with their most hated rival, the Cowboys, to move in front of them. The Cowboys moved down to 12 and took linebacker Micah Parsons from Penn State.

“Obviously, the more you trade up in the round, the more you’re going to have to give up,” Roseman said. “By the same token, when you trade in the division, you understand that you’re not going to get any values to that as well.”

None of this means that Smith will be a star or will even work out in the NFL. But that’s not the success we’re talking about tonight. We’re talking about how the Eagles successfully maneuvered around in a draft that wasn’t a great situation for them. Howie did a good job here.  [NBCSP]

The Eagles, as we mentioned earlier, picked a wide receiver in the first round last year and it didn't really work out. That simple fact begs the obvious question — which Jeff McLane asks over at the Inquirer — as to whether this pick happens if not for Roseman's misfire a year ago. Is he trying to make up for his mistake last year? Was receiver really as big a need as other positions on the weak roster, like cornerback or edge rusher?

Reagor may still develop into a quality starter. But there was little evidence of it during his rookie season. And beyond him, the cupboard is bare. And an argument could be made that Reagor was, like Smith, the result of a previous receiver failure: picking JJ Arcega-Whiteside in the second round of the 2019 draft.

The Eagles are a rebuilding team. They have a new coach in Nick Sirianni. And while Smith could be seen as satisfying Sirianni’s appreciation for the position, would the Eagles have been better off addressing one of the positions they’ve long considered premium?

Smith, Roseman appeared to be saying, was worth the do-over. And that could very well end up being the case. The reigning Heisman Trophy winner checks off a lot of boxes, even if there are valid concerns about his slight frame and low weight.  [Inquirer.com]

Not feeling good yet? How about some New York Giants misery? The Giants were sitting pretty at 11 before the Eagles swooped in and took their intended target in Smith with the 10th pick, after trading with the Cowboys. And just like how they were feeling after the Eagles "cost them" a playoff berth in Week 17 of the 2020 season, the fanbase in North Jersey and New York seem pretty upset about missing out on The Slim Reaper.

That it was the Eagles who forced the trade and cost the Giants the Heisman Trophy winner, though, was distasteful.

“It’s a business deal, that’s what it is,’’ Gettleman said. “One hand washes the other. Obviously, Dallas was happy with their return. So, they made the trade with Philly and we traded down. Not a big deal.’’

“Look, trades happen a lot,’’ Judge reasoned. “Normally, it doesn’t happen within the division, but my enemy is my friend. They made a move that worked for them and it was a good business move. We’re pleased the way it turned out. We added a good player and some assets for the future.’’

Sure they did, but … those fr&%*!ing hated Eagles, whose tank cost the Giants a playoff berth in January.  [NY Post]

Speaking of those Giants, the folks at CBS Sports picked them as losers — mostly because of what the Eagles did.

First New York watched as the Eagles and Cowboys teamed up to allow Philly to jump ahead of the G-Men in the draft order. Then the Eagles took Smith, the presumptive Giants target at No. 11. Then Dave Gettleman added a slew of picks to move all the way down to No. 20. Getting a future first -- and other picks -- was great, but using the 20th pick on Florida wideout Kadarius Toney? Meh. He's another big-play piece for Daniel Jones, which is a plus, but they could've easily waited to capitalize on Day Two WR depth.  [CBS Sports]

Benjamin also singles out Smith's former teammate Hurts, who was his quarterback for one season at Alabama, as a winner after the first round:

Should Justin Fields have been in play at No. 10 for the Eagles, who moved up two spots with Dallas? Probably. But make no mistake about it: Philly adding Hurts' former Alabama teammate, DeVonta Smith, is big news for the second-year QB. Not only because it signaled yet another fork in the road where the Eagles opted not to add another post-Carson Wentz QB, but primarily because Smith instantly becomes the club's best receiver -- a ferociously competitive new No. 1 that should accelerate Hurts' improvement.  [CBS Sports]