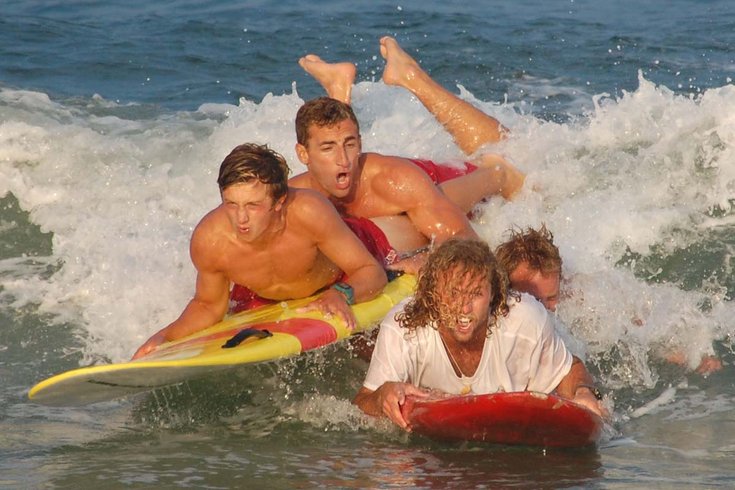 Members of the Surf City Beach Patrol catch a wave on one of the Long Beach Island town's beaches. The beach patrol guards Surf City's beaches daily from 10 a.m to 5 p.m. during the summer season.

Surf City is located at the midway point of Long Beach Island – the borough’s Division Avenue is considered the dividing line between LBI’s northern and southern halves.

It is part of an area that once was known as Great Swamp until the town's residents voted to change its name to Long Beach City in 1875 (good decision) and then again to Surf City in 1894 (better decision).

The 2016 beach tag season in Surf City runs from June 18 through Sept. 5. The borough requires all visitors between the ages of 12 and 64 to wear tags on all its beaches. Beachgoers 11 and younger, or 65 and older, do not require beach badges.

Through May 31, Surf City’s seasonal beach tags can be purchased for $25 by mail using this form or in person at the Surf City beach badge booth at Borough Hall, 813 Long Beach Blvd. The booth opened May 1 and will remain open seven days a week from 9 a.m. to 4:30 p.m. throughout the summer.

The Surf City Beach Patrol guards the borough’s beaches daily from 10 a.m to 5 p.m. during the summer season.

Swimmers must stay between flags on each beach.

During the season, while lifeguards are on duty, surfing is restricted to the beach south of the South First Street jetty to the South Second Street lifeguard station’s northern flag. All surfers must use leashes with their surfboards.

Surf fishing is only permitted from the northern side of the 23rd Street jetty to the 24th Street lifeguard station’s southern flag while the lifeguards are on duty.

Surf City beach visitors are prohibited from walking on the jetties.

A searchable calendar of events in Surf City can be found here.