2016 WWE Fastlane preview: Who will challenge Triple H for the championship at WrestleMania? 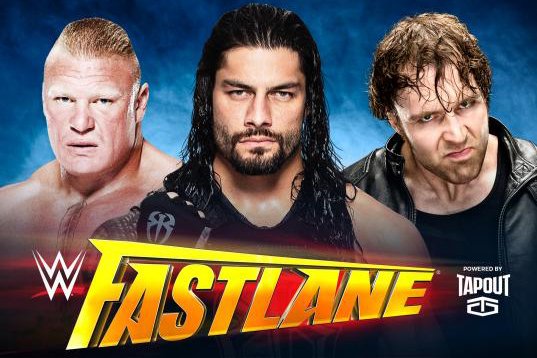 We’ve reached our final pay-per-view stop before WrestleMania on April 3rd, and it happens this Sunday at the Quicken Loans Arena in Cleveland for the second annual edition of Fastlane. Coming out of this event, many things will be determined heading into WrestleMania, and most importantly, the main event.

There’s also a plethora of great matches on this card with a lot of championships to be decided. Most of the angles heading into Sunday have a clear vision, with the exception of two in my opinion, and I’ll get to those later.

Here’s what’s in store for you – FOR FREE ON THE WWE NETWORK FOR NEW SUBSCRIBERS! – on Sunday night:

2 out of 3 Falls Match for the United States Championship

This match will take place on the Kickoff Preshow, and I like the fact that Del Rio begged for this match to be a 2 out of 3 falls encounter because he wants to prove Kalisto’s wins against him are nothing but a fluke. And with Sin Cara returning to action and Del Rio suffering terribly without direction, a lot might think this’ll be Del Rio’s chance to regain the United States title and head into WrestleMania as champion.

I’m not so sure. First, the fact that Del Rio wanted this as a 2 out of 3 falls match reeks of it backfiring on him in some way. I hope that’s not the case, but taking the title off Kalisto would pretty much prove he’s a joke and send him right back into a tag team with Sin Cara doesn’t really do him any good at all. I think Kalisto retains and Del Rio continues to suffer because of it.

The Wyatt Family vs. Big Show/Kane/Ryback

After the Wyatts declared war on the Titans of WWE, it looked like they’d gotten rid of the likes of Kane, Ryback and the Big Show. If you caught Raw this past Monday, you’d see that these Titans made a big comeback and will now face the Wyatts in Six-Man action at Fastlane.

Bray Wyatt looks like the odd man out here, but that could set him up for something later on in the evening. Stay tuned. The Titans lose.

Sasha Banks and Becky Lynch vs. Naomi and Tamina Snuka

Since Sasha’s return from injury, she’s made it a point to achieve success on her own without the help of Naomi and Tamina. Because of that, Team B.A.D. is no more. And with Becky being attacked a few times by Naomi and Tamina, with Sasha making the save, it makes a little sense that this tag team match is happening.

What we’re still left to wonder is if this is a one-time thing for Sasha and Becky. I sure hope it is. They should be going after Charlotte for the Divas Championship, but that current spot has been reserved for Brie Bella. However, with WrestleMania being on the horizon, I think those two will have their shot sooner or later.

Your winners: Sasha and Becky

Owens won the Intercontinental title this past Monday on Raw for the second time, and was immediately confronted by Ziggler wanting a match for the title. Owens said, “Nah,” but later on during Raw, the match was somehow made official without anything further playing out on screen. No Owens changing his mind or Owens being forced to defend the title, nothing. This match has been built rather weak, and the rivalry these two have had leaves a lot to be desired. I know it’s not the first time I’ve said that. And Ziggler remains in a holding pattern where literally nothing he does on television leaves people wanting more. Maybe it’s not his fault. Maybe it is. He just doesn’t connect with the fans as well as he did years ago. Hell, even last year.

And, unfortunately, he’ll be given another loss.

Brie has already gone on record as saying she’s probably going to retire soon, but I don’t think that automatically dictates she won’t eventually become Divas Champion before walking away for good. In fact, I think there’s a better chance of Brie walking out of Fastlane with the Divas title than I thought before she said on ABC’s Good Morning America that she’d be retiring soon.

However, Charlotte is perfecting her role as a heel with her father by her side, so taking the title off her now might hurt her in the long run. With women like Charlotte, Becky, Sasha and the return of Paige this past Monday, the Divas division should worry more about elevating the division further with great matches and angles rather than put the title on Brie as a “feel good story.” I think Charlotte retains for that very reason.

[SPOILER: The below match is made official on Thursday’s edition of SmackDown]

This series of matches should conclude at Fastlane, and we’re probably all hoping Styles goes over, especially with nailing Jericho with a Styles Clash. Heading into WrestleMania, I’m almost worried we’ll see a fourth [or – hell – fifth] Styles-Jericho match.

I’ve written before that this series of matches was lacking something. I still feel that way. I understand how the story is Jericho challenging the “new guy” who thinks he’s one of the greatest wrestlers in the world that’s never had a chance to wrestle some of the greats in WWE, as some sort of feud of bragging rights. I’m just not sure that’s good for Styles in the long run. He doesn’t need bragging rights. He’s proven his entire career he’s one of the best, and now all of a sudden because he’s in WWE he needs to prove himself? I hate that mantra that anything that happens outside of WWE doesn’t count. That’s pretty much what this feud proves.

Jericho originally said no to the match, but after a slap from Styles on SmackDown, accepted the match. I’m actually looking forward to it. It should be a really good match, and Styles should come away with the victory. Maybe we’ll finally see a full-fledged Jericho heel turn this time around.

The winner of this match will go on the headline WrestleMania 32 in Arlington, Texas against the WWE World Heavyweight Champion, Triple H. The funny thing pointed out by the internet wrestling community when this match was made back in January was the inclusion of Lesnar, because why the hell would Triple H want to face Lesnar again, and this time for the championship?

The buildup to this match has basically focused on Reigns and Ambrose and a possible split between the two, which has made for some compelling angles in recent weeks. Ambrose teasing a Dirty Deeds on Reigns this past Monday on Raw was fantastic. But, let’s not forget about Lesnar, either.

Here’s why Paul Heyman thinks his client will be the one to walk away victorious on Sunday night.

I’m fairly certain Lesnar will get screwed again, as that’s how they usually book him in matches like this where he doesn’t come out the victor. Maybe a Wyatt Family appearance? Remember, there are no disqualifications in Triple Threat matches, so I’d expect some kind of chicanery to prevent Lesnar from walking out of Cleveland as a co-participant in the WrestleMania main event.

As for Reigns and Ambrose, it’s certainly obvious who would be facing Triple H in the main event of the biggest event of the year. This is supposed to be Reigns’ time. It’s supposed to be his moment. And whether that comes off a heel turn by Ambrose or Reigns simply beating him and them shaking hands at the end, I don’t think there’s any way Reigns doesn’t walk out of the Quicken Loans Arena with his spot cemented in the WrestleMania 32 main event.

Do I want to see an Ambrose heel turn? It would probably be fun to watch. But he’s far too over with the fans right now to truly justify a heel turn. But, if anyone can make a mistimed heel turn work, it’s probably Ambrose.

I’m really looking forward to this event, especially with all the big matches slated in the lineup. This might rival the Royal Rumble, and I definitely wouldn’t have said that the day after that event. The New Day will also be in the house as they are guests on Edge’s and Christian’s Cutting Edge Peep Show. That should be a fun segment, too.

Check back here on Monday morning for a full review of WWE Fastlane.