The incumbent had received nearly 30% more votes in a race that was billed as a referendum on his office's progressive, criminal justice reform agenda 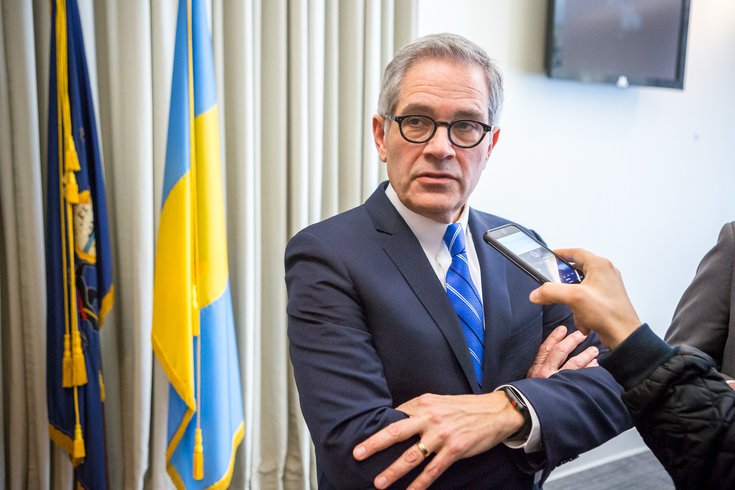 Incumbent Philadelphia District Attorney Larry Krasner has won the Democratic primary against challenger Carlos Vega, securing a probable path to a second term and nod to his progressive reform agenda.

On Tuesday, just before midnight, with 90% of voting divisions reporting, Krasner led Vega with 30% more votes. The Associated Press called the race for Krasner at midnight, and the results remain unofficial until certified by elections officials.

Krasner's victory belied a race that many felt would be closer than Tuesday's results revealed. Despite mounting homicides and shootings in Philadelphia, voters stood by Krasner's big-picture push for a new model of criminal justice.

The incumbent district attorney declared himself the winner shortly before 11 p.m. from his election night headquarters at the Sonesta Philadelphia hotel in Center City. Vega's campaign was stationed in Northeast Philadelphia.

Vega has conceded the race. In tweets that did not mention Krasner by name, he talked about crime victims and said he is "hopeful that my opponent will take them more seriously during his tenure."

This was not easy for the victims especially. Please remember them. Please give your thoughts to our city. I am hopeful that my opponent will take them more seriously during his tenure.

Across the city's roughly 700 polling places on Tuesday, activity was slow for what is typically an election with low voter turnout. Philadelphia's voter turnout for the primary hovered around 17.6% with less the 10% of votes still to be counted.

It was expected that a significant number of voters participating in Tuesday's election would cast their ballots in advance by mail, reflecting an overall shift that has been accelerated by the coronavirus pandemic. During the presidential election in November, which coincided with a spike in COVID-19 cases in the state, nearly 50% of Philadelphian's voted by mail.

On Tuesday, 10,320 ballots – or 6.76% the total number of ballots cast – were were returned by mail, according to data from the Philadelphia City Commissioners.

Across Pennsylvania, 564,000 mail-in ballots had been returned heading into Tuesday's primary, including about 56,300 in Philadelphia, according to State Department data. The vast majority of mail-in ballots were returned by Democrats.

By comparison, in the November election, Pennsylvania received more than 2.6 million mail-in ballots, including 371,566 returned in Philadelphia.

Unlike in November, the ballot counting process in Tuesday's process was quicker after some initial delays. Ballot workers began counting mail votes at 7 a.m. Tuesday and results trickled in after the polls closed at 8 p.m.

The race between Krasner and Vega put Philadelphia's gun violence epidemic in focus, with voters weighing the results of Krasner's reform-centric platform against Vega's promise to improve the city's safety.

Krasner, 60, was a longtime criminal defense and civil rights attorney before he was elected district attorney in 2017. He beat out a crowded field of Democratic candidates with a campaign that centered on systemic change.

Homicides and shootings have been on the rise since Krasner took office, a problem that has been intensified by the pandemic. And while cities across the U.S. have seen similar spikes in violent crime, Krasner's reform agenda has been put under the microscope as a proxy for public safety concerns.

Vega, 64, was a homicide prosecutor in Philadelphia for 35 years before he was fired during Krasner's transition into the District Attorney's Office. Vega has received the endorsement of the Philadelphia chapter of the Fraternal Order of Police – a frequent Krasner foe – and has urged Philadelphia voters to choose a new direction to address the city's violent crime.

During the campaign, Vega pointed to the city's falling conviction rate for a range of offenses, including illegal gun possession cases, and argued that Krasner's office lacks the experience and relationships with other agencies to advance reform while keeping Philadelphia safe.

Krasner's election in 2017 prompted a wave of progressive district attorneys taking power in cities around the United States. An increased focus on questions of racial equity in the criminal justice system have driven many voters to embrace candidates who say they can pave a more equitable path. Tuesday's primary election in Philadelphia represents one of the first major tests of the progressive agenda Krasner has blazed.

And in addition to a slate of judge elections, voters are asked to decide on four ballot questions posed to all Pennsylvania voters that address important issues such as loan eligibility for fire and EMS companies, the scope and duration of the governor's emergency declaration powers, and a constitutional amendment prohibiting the denial of equal rights based on race and ethnicity.

A fifth ballot question in Philadephia covers a proposed amendment to the Home Rule Charter that would provide for an expanded Board of License Inspection Review.