More than 6.9 million Pennsylvania voters participated in the 2020 election, a record-high since 1960 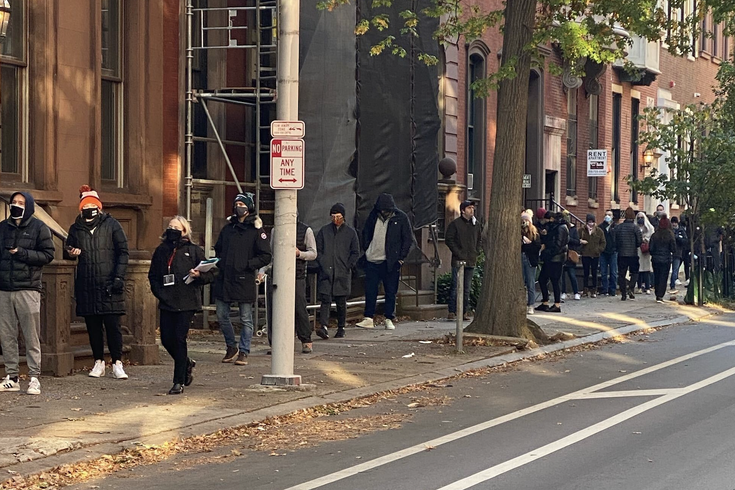 President-elect Joe Biden received 81% of the vote in Philadelphia, while President Donald Trump earned 18% of the citywide total.

As city and state officials finished the process of tallying ballots cast in-person or by mail, both Philadelphia and Pennsylvania saw a record-number of voters turnout in the 2020 election.

More than 749,000 ballots were cast in this month’s election in Philly, which is over 66% of registered voters in the city.

That’s the highest turnout of Philly voters in an election since 1984, City Commissioner Al Schmidt said. It’s also a 7% increase in voter turnout since the 2016 election, according to Billy Penn.

Roughly 48% of all ballots in Philly were cast in-person at a polling place, while almost half were submitted by mail, according to the city’s election results database.

President-elect Joe Biden received 81% of the vote in Philadelphia, while President Donald Trump earned 18% of the citywide total.

“This has been an extraordinary election — unlike any that I have ever witnessed, and I’ve been involved in Philadelphia elections since I was seven years old,” City Commissioner Lisa Deeley said.

Statewide, more than 6.9 million Pennsylvanians voted, which is a record-high turnout since at least the 1960 election. That accounts for almost 71% of Pennsylvania’s voting-age population, which Sec. of State Kathy Boockvar said is also a record-high over the past 60 years.

The state saw a nearly 10% increase in voter turnout from 2016, when 6.1 million Pennsylvanians voted in the election that saw Trump defeat Hillary Clinton by less than 1%.

After tallying up all the in-person and mail-in ballots cast across the state, Biden held an 81,000 vote advantage over Trump in Pennsylvania.

"I am thrilled with the voter engagement and record turnout in this year's election, which truly reflects the vitality of our democracy," Boockvar said.

"It is also a powerful credit to Pennsylvania's dedicated election officials and poll workers, who worked incredibly hard to run a free, fair and secure election with no significant issues while contending with a pandemic, new mail-in ballot procedures and what is apparently the highest voter turnout in commonwealth history."

Much of the 2020 election was conducted via vote-by-mail due to the ongoing COVID-19 pandemic. As a result, the counting of ballots has continued over the past two weeks since Election Day — including at the Pennsylvania Convention Center in Philly.

Any mail-in ballot postmarked by Election Day and received by 5 p.m. on Nov. 6 could be counted in Pennsylvania. However, less than 1,000 ballots arrived during the additional three-day window in Philly.

While Pennsylvania and the entire presidential race was called for Biden on Nov. 7, all 67 counties have to submit their final certified vote count to the state by Monday.